The city of Djenné, founded in the 8th century (on the UNESCO List of World Cultural and Natural Heritage, 1989), and Tombouctou (Timbuktu), founded around 1100, were the centers of older West Sudan clay architecture. Characteristic are two-storey, rectangular flat-roofed houses, built with sun-baked clay bricks. The houses have decorative ceilings on the roof and decorated entrances. Djenné’s architecture was taken up by the French in the 19th century, which transformed it into a neo-Sudanese style. The style was first used in a fort in Ségou (destroyed). Later examples are in government offices in Bamako and Ségou, and in the red market, Bamako.

The Great Mosque in Djenné, erected in 1906–07, is not as elegant as many of the smaller village mosques, but is considered the largest building in clay in sub-Saharan Africa. A mixture of clay and cement is used in buildings erected after the colonial period; several are listed in a Neosudan style; eg. the medical clinic in Mopti (1974, Aga Khan Architecture Award 1980). 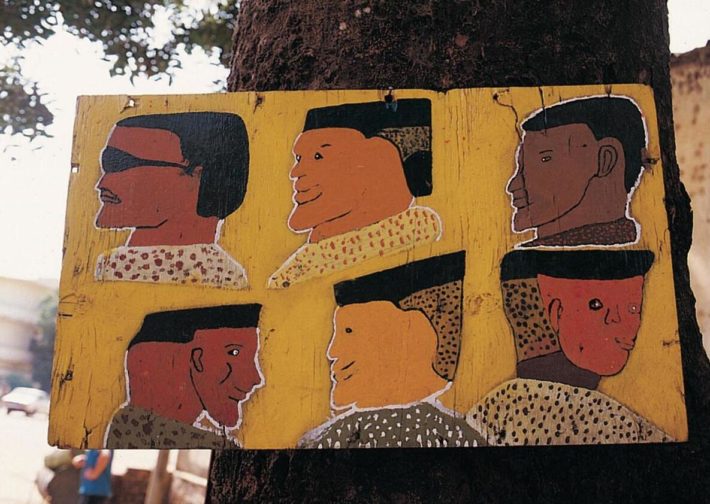 Naivist paintings are used to advertise service companies. Here is an advertisement poster for the local hairdresser.

The art of painting has primarily been related to the decoration of masks. Naivist paintings, spontaneous in expression, used to advertise hairdressers, tailors, bars, etc., are popular. The self-taught artist S. Sinaba (b. 1950) has performed a number of such paintings in Bamako in the 1980s. Two renowned artists are Ismael Diabate (b. 1945) and Abdoulaye Konate (b. 1953).

The Great Mosque of Djenné is one of Africa’s largest sun-dried clay buildings. It is characteristic of the buildings in the area with its flat roof and its decorative elements.

Characteristic of Mali’s fabrics are narrow woven stripes that are sewn together with intentional irregularities. Other specialties are indigo-dyed fabrics and cotton noises painted with clay. The latter is used by women after circumcision, at weddings and after giving birth. The technique has been booming since 1978 when a group of artists were formed to revitalize the craft.

The motifs are often drawn from traditional African sculpture, Egyptian art and comics. Clothes made of such fabrics became popular with young intellectuals, and Malian fashion designer Chris Seydou (dead 1994) made clothes in such materials (Bamako and Paris).