Morocco’s traditional settlement is largely characterized by the Berber culture. The settlement consists partly of individual buildings and plants of stone, greenhouses, for the resident population, while the nomads build comparative plants in pisces technique for defense and storage of various purposes, and even live in tents while the animals are grazing. Especially known are the casbas in southern Morocco. There are also larger, fortified villages, gal’a. The facilities are built of stone – building stone of sun-dried clay and clay mixed with straw. The walls are decorated with crenellations with characteristic “horns”, while the buildings are often decorated with stones of sun-dried clay, which form geometric patterns. Urban planning and buildings are well adapted to the extreme climatic conditions. The use of clay gives the structures a limited service life. Few buildings are older than from the 19th century. Known in the tourist context is the oldest part of the settlement in Marrakech and some other cities.

The earliest examples of Islamic architecture in Morocco, such as the mosque in Fès, appear to have been relatively simple buildings. The later Islamic architecture became part of a Spanish-Moorish culture, with a building program that included public facilities such as mosques, madrasas, public baths and caravan series. In the buildings, special emphasis was placed on decorations in the form of stucco, ceramic tiles, etc. Examples are the mosque in Fès (1276) and Attarin Madrasa in Fès (1323-25). The Spanish-Moorish style of construction was to characterize the architecture of Morocco until the 20th century. 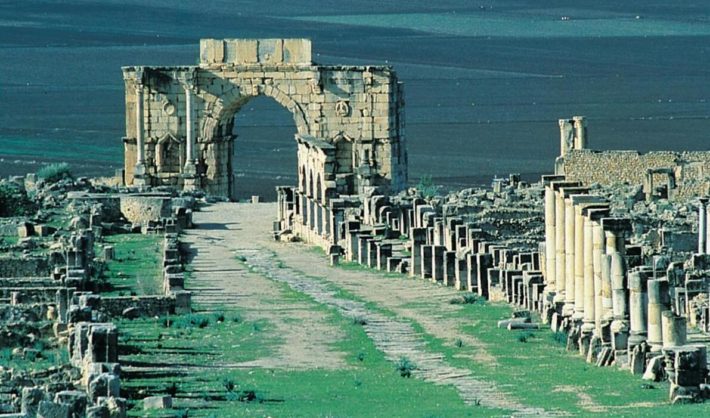 During the colonial period in the early 1900s, all planning and construction took place under French influence, and Moroccan society was cut off from its traditional building heritage. Nonetheless, among the foreign architects who worked in Morocco in the years following the Second World War, most with practice from France, an awareness of the fundamental differences between European and Arab traditional architecture and the various patterns of life and society that followed these grew. differences. In the early 1950s, an attempt was made in Casablanca to use the traditional Moroccan dwelling as a model for new housing. These experiments provided knowledge of climate-adapted material use and floor plans, but the European urban planning ideas used lacked the qualities of the traditional Arab village structure. 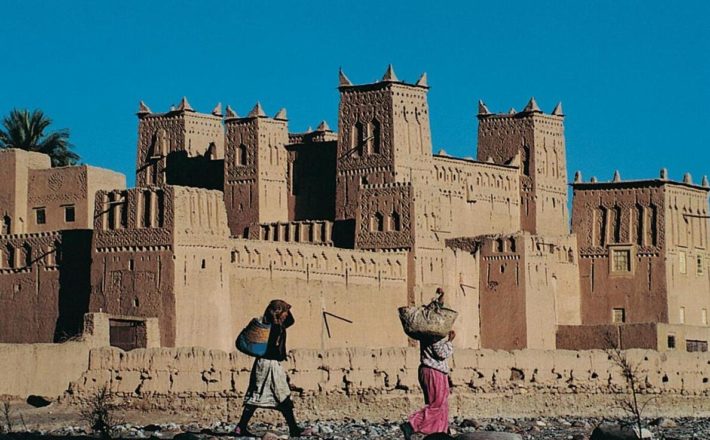 The country’s traditional settlement is characterized by the Berber culture in many places. Especially known are the casbas in southern Morocco. The facilities are built of stone, building stone of sun-dried clay and clay mixed with straw. The walls are decorated with crenellations with characteristic “horns”, while the buildings are often decorated with stones of sun-dried clay that form geometric patterns. The picture shows the Amirmil Kasba in Ouarzazate Province.

French dominance persisted even after the liberation in 1956, but with an ever greater integration of regional living and construction methods in the attempt to reconstruct the Arab tradition. The most important contribution in this process came from younger Moroccan architects, all of whom were educated abroad. Mention should be made of E. Azagury with a few smaller school facilities, where he introduced the use of new steel technology, and a housing facility in Casablanca (1960) where the use of air gaps in the facade both solves the climate adaptation and gives the architecture character. In a residential building in Rabat (1960) he went ahead and used the traditional dwelling house’s introverted floor plan. At the same time, he worked with other Moroccan architects on a plan for the reconstruction of Agadir, and designed several of the city’s public buildings, where preventive constructive measures in the event of earthquakes played a crucial role in the design. Nevertheless, the approach to independent Moroccan architecture is more evident in his own residence and office in Casablanca from 1966, where the use of materials and the constructivist design language also show the influence of contemporary international architecture. 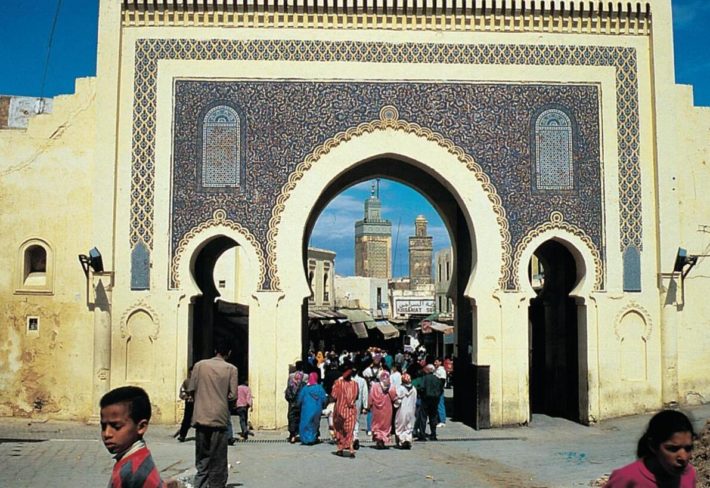 Bab Bou Jeloud gate to the medina of Fès, which has exterior blue tiles, green inside. In the Islamic settlement, special emphasis was placed on decorations in the form of stucco and ceramic tiles.

MB Embarek was educated in Scandinavia and was influenced by A. Aalto and J. Utzon. As Azagury he also worked to establish a modern architecture with regional roots, and as editor of the journal A + U, he studied traditional building and planning ways. In his practice, however, he did not draw motives from these, but instead aimed to transform the colonial legacy into a modernism that in turn is harmonized with tradition. His most important work as executive architect is the International Airport in Casablanca (1980), where the consideration of regional identity was definitely subordinated to the need for functional and technically rational solutions.

Faraoui and P. De Mazieres also wanted to combine advanced technology with traditional Moroccan values, and their 1962 mosque project shows an Islamic type of building that, with its regular layout, has references in European modernism. A new direction is ushered in with the Malabat tourist resort of Tangier from 1965, built in 1978, which suggests a clearer return to Islamic tradition by continuing the Moroccan village pattern, in organizing the units around a common courtyard and with shaded balconies. This was confirmed by student housing at the University of Rabat (1978), a facility that also links with other Arab countries. Hassan 2’s large mosque in Casablanca (completed in 1993) by architect Michel Pinsau is one of the largest in the world with a 175 m high minaret. 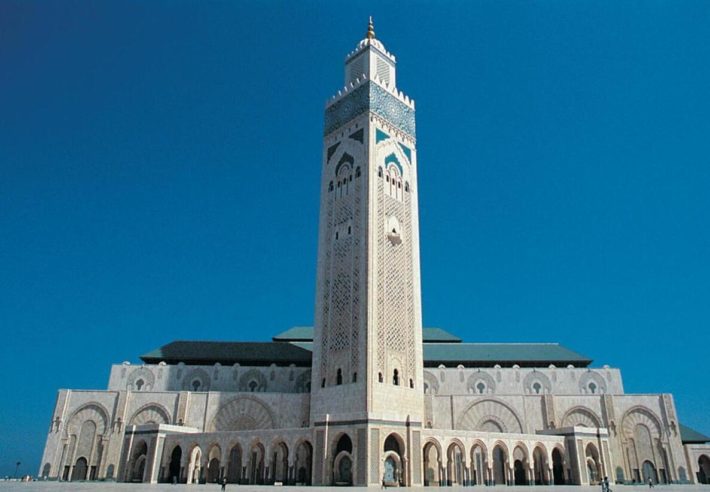 Hassan 2’s large mosque in Casablanca (completed in 1993), designed by architect Michel Pinsau, is one of the world’s largest with a 175 m high minaret.