The most important Roman sites in Morocco are Volubilis, near Fès, with forums, basilica and Caracalla’s triumphal arch (217 AD) and Lixus. Cave paintings can be found in the south, for example in Foum al-Hassan and Oukaimeden. For the most part, traditional arts and crafts in Morocco are characterized by Islamic culture.

Modern Moroccan art is inspired by both Arabic, Islamic-Arabic and Western art. A number of artists painted in a naivistic style, including Muhammad ibn Ali Rabati (1861-1939), who painted small naivist paintings with motifs from Moroccan everyday life.

Morocco’s first art school, Escuela Preparatoria de Bellas Artes, was established in 1945 in Tetouán, and in 1950 the French founded the Ecole des Beaux-Arts in Casablanca. After independence, artists such as Ahmed Cherkaoui painted abstract pictures with elements from Berber art.

Farid Belkahia, Muhammad Melehi and Mohamed Chebaa ( Casablanca Group ) introduced Arabic calligraphy and local crafts in the art education. Belkahia used traditional Moroccan materials as copper and leather in his works, which he modeled in abstract forms. In 1970, closer contact was established with other Arab countries, including exhibitions of Arabic art. Among Moroccan sculptors are Mubarak Brahim (1920–61), Abdellaq Sijelmassi (b. 1938), Boujemaa Lakhdar (b. 1940), Hassan Slaoui (b. 1946), and Omar Youssufi (b. 1950).

Morocco has rich arts and crafts traditions. From the late 700s to the mid-1200s, an Islamic handicraft was developed in the country with influence from Andalusia in Spain. In the cities metal art, woodwork as well as textiles and carpet art were made; often with geometric star patterns. Since the 18th century, there has been considerable ceramic production, first and foremost in Fès, with glazed objects in strong colors. Illuminated manuscripts with maghribic writing are preserved from around the 1000s. The leatherwork often has pressed and colored ornamental decorations. The city’s craftsmanship has a refined feel, while the rural products are more rustic with unglazed, decorated ceramics as well as strong geometric patterned rugs and textiles.

Three of Morocco’s most important museums with art objects are the Ouaya Museum in Rabat, the Dar Batha Museum in Fès and the Dar Jamai Museum in Meknès. The most important archaeological museum, which contains most of the finds from Volubilis, is located in Rabat. Modern Moroccan art is exhibited in the Musée d’Art Contemporain in Tangier (opened 1990) and in a Center for Contemporary Art in Casablanca (opened 1996).

The music culture has historical ties to the Sudan, West Africa and Egypt. Outdoor ceremony music ghaita (oboinstrument) and bendir or tablets (drum) represents a panislamsk tradition, while singing to ganga (page drum) and qarqabat (jernidiofoner) shows kinship with the West African forms.

The Islamic art music type maghrib, also called the Andalusian tradition, is dominated by nauba, a chamber musical suite form. It is performed by ensembles with ‘ud (lute), rhubarb and kamanja (violin types), tar (frame drum) and darbouka (drum), sometimes supplemented by piano and cello. The style is heterophone, richly ornamented and in accordance with Islamic theory of melodic and rhythmic modes.

The cultural boom after independence (1956) is reflected in the development of popular music and annual festivals for folklore (Marrakech), jazz (Tangier), Andalusian music (Saîdia) and African art (Agadir). 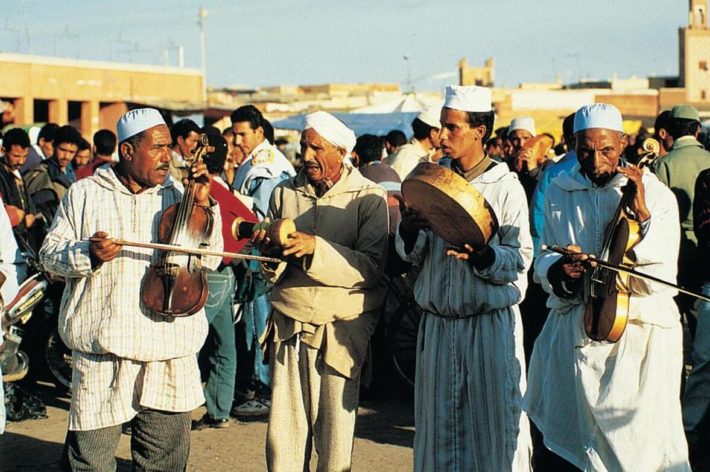