Art in the Democratic Republic of Congo. It is in the art of painting that the most significant development has taken place since the colonial period. Wall paintings with historical and decorative motifs of ancient times have mostly been lost due to perishable material. The development of painting was influenced by European art from the 1920s, including through the mission, and art schools were established. Albert Lubakis ‘works were exhibited in Brussels, Paris, Geneva and Rome in the 1930s thanks to Georges Thiry, a benevolent official who facilitated Lubakis’ work as an artist and purchased his entire collection.
The French artist Romain-Desfosses founded his own school and art center called Le Hangar in 1947 in Elisabethville (Lubumbashi), later called the Académie d’Art Populaire Congolais and in 1954 incorporated in the Académie des Beaux-Arts, Lubumbashi. Romain-Desfosses urged the artists to express their uniqueness with their own techniques rather than copying Western art. Three key names in the Lubumbashi school are Pili-pili with its landscapes, Mwenze with motifs from hunting and family life, and Bela who painted spontaneous pictures of animals with their fingers. 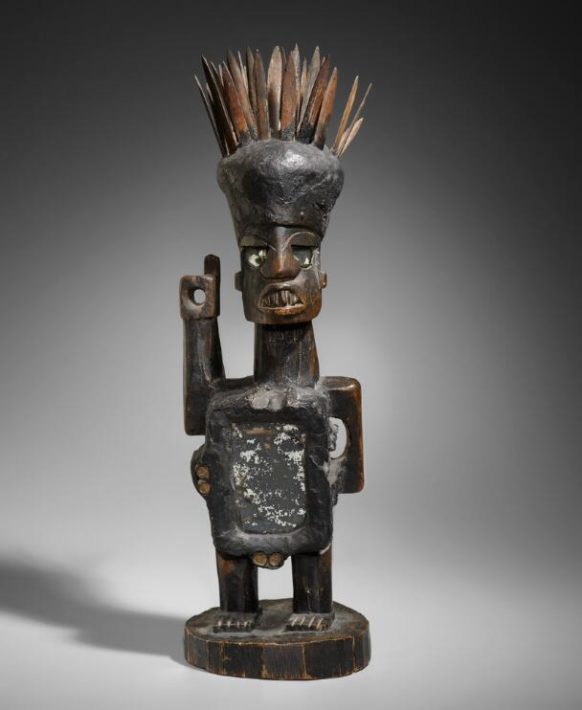 The wealthy businessman Maurice Alhadeff was the mistress of a number of artists in the 1950s and 1960s Léopoldville (now Kinshasa), including Albert Nkusu, known for his forest motifs and Christ figures made in contrasting colors. François Thango (1936–81) became one of Alhadeff’s most popular painters, and is known for his portrayals of monsters and dangerous spirits, executed in a peculiarly surreal style.

The Académie des Beaux-Arts in Léopoldville was founded during World War II. Among the most famous artists of the Academy were the sculptors Ngynamau, Wuma, Liyolo and Tamba and the painters Ndamvu, Mavinga, Lema Kusa, Kamba Luese, Mayemba and the Chenge brothers. They worked in a cubist-inspired style. Avant-garde groups were formed to counterbalance the established names without making any significant fortune.

A popular genre from the 1980s is images made in series, often humorously portrayed and performed by self-taught artists. Portraits and scenes from daily life are common, as are motifs from the independence struggle with bombings, executions and portrayals of national heroes.