The news relating to the territory of Burkina Faso, formerly called Alto Volta, dates back to the 14th century when the Mossi, who came from the East, under the Moronaba dynasty, founded a very powerful kingdom, organized in a feudal way, which had as its capital city ​​of Ouagadougou.

According to Abbreviationfinder, an acronym site which also features history of Burkina Faso, their most powerful means of defense was the cavalry which in fact prevented the raids of the conquerors, who also exercised the trade, who began their penetration when the various great empires were founded in the Niger Valley.

The Mossi, very good farmers, lived in large villages. In the western part of the country the Gurunsi, Bobos, Sarrakol and Lobi found their environment; while in the east the Soninkes and Bambara settled. Two other important ethnic groups, the Peuhl, who settled around the centers of Dori and Say and the nomadic Tuareg, who occupied the northern part, composed the population of the country. As a colony, erected by decree of March 1, 1919, it was part of French West Africa.

As a result of colonization, there was a great development of crops, especially coffee, cotton and peanuts. Cattle breeding was almost exclusively the prerogative of the Tuareg and Peuhl. The capital also had an important slaughterhouse.

No significant events occurred during the two world wars; but after the end of the second, France began to apply a preparatory policy so that the natives were able, in a few years, to manage their own autonomy. As a result of this strategy, the first nationalistic movements began to spread in the country, mostly inspired by the events already taking place in neighboring countries, in particular in Ivory Coast, Sudan and Senegal.

On September 28, 1958, a constitutional referendum was called, the result of which was the will of the people to be part of the “Franco-African Community”.

On April 4, 1959 the Alto Volta concluded an agreement with the Ivory Coast, Dahomey and Niger. On 11 July 1960 he gained independence, which was officially proclaimed on 5 August and on the 23rd of the same month the Security Council asked that the young Republic be admitted to the United Nations, and this happened on 20 September.

The authoritarian president, Maurice Yameogo, also head of the single government party, the Voltaic Democratic Union, was re-elected in the 1965 election.

Yameogo, in an attempt to bring improvements to the economy, in a precarious state, applied severe austerity measures and banned all opposition parties. This sparked a popular revolt, supported by unions, students and bureaucrats.
In January 1966, in order to restore order in the country, Colonel Sangoulè Lamizana seized power and established a military government regime that was to remain in office for a four-year term, promising in December 1966 that he would eventually restore constitutional government. However, he also included civil elements in the government and immediately began an extensive general restoration work.

Yameogo was tried and sentenced in 1969 and pardoned in 1970. In this same year, in June, a referendum was held for the approval of a new Constitution, with which the National Assembly was elected and a new government was created, mixed, with 5 military and 10 civilians, chaired by G. Ouedraogo, while general Lamizana remained president of the republic.
In the international arena, Lamizana received wide acclaim; he shared with Egypt the point of view on the Middle Eastern question and very warmly welcomed the then president of the French republic Pompidou.

In 1973 the Upper Volta was hit by the terrible drought that affected the Sahel countries, and this meant economic and, consequently, political and social difficulties. And behind the repeated promises of the president to re-establish a government made up entirely of civilians, the opposite occurred, however, because in 1974, due to conflicts between political forces within the same ruling party, he was forced to return to the military regime.

The parties were dissolved; A “National Movement for Renewal” was established in January 1976 and normalization work began the following May.

The civilian government was recomposed by Lamizana with the 1977 Constitution and the following year, albeit much contested, he was re-elected president.

Increased difficulties and unrest on 25 November 1980, Colonel S. Zerbo led a military coup, however bloodless, and assumed power. He immediately tried to bring back the agreement between the unions and the government but every attempt at work failed and on November 7, 1982 another coup, this time bloody, struck the country by a group of non-commissioned officers who first set up a “Conseil de Salut du Peuple” and then entrusted the government to Sergeant Major JB Ouedraogo.

In January 1983 Captain Th. Sankara became prime minister. In May, however, Ouedraogo, worried about the sudden rise in the estimate of the village of Sankara, tried to have him arrested; the situation was reversed because the latter on 4 August 1983 carried out a bloody coup d’etat and had Ouedraogo arrested, took power and started an anti-western policy.

On August 4, 1984 the Upper Volta assumed the new name of Burkina Faso, which according to the indigenous language means “home of True Men”.

Many politicians were tried for corruption; then the purification policy eased in September 1984. The following year a short border war with Mali broke out, soon recomposed with the mediation of the West African countries. The regime, now strong with popular consensus, allowed many eminent political exiles to return to their homeland.

In October 1986, French President Mitterrand visited the country. Meanwhile Sankara, who had seen the popular favor grow around him, on 15 October 1987 he died in a coup d’etat, led by his deputy B. Compaorè. He revised the previous austerity policy and moved closer to western countries. In September and December 1988 there were two more coups which failed, however.

In March 1990 the first Congress of the “Popular Front” took place, a political organization headed by Compaorè. This congress decreed the launch of a new Constitution, which took place in June 1991, the application of a policy of “state capitalism” and the election of an Executive Committee of the Front.

Having disavowed the Marxist principles of the previous government, Compaore immediately introduced multi-partyism, solicited foreign investments and aligned with the dictates of the International Monetary Fund, privatized and liberalized the economy. Then he won the presidential elections of 1991 while the legislative elections of May 1992 were won by the ruling party and the government was a coalition.

In January 1994, the economic difficulties persisting, the president appointed MCR Kaborè premier, who was contested shortly afterwards by the unions, which in April decreed a three-day general strike. 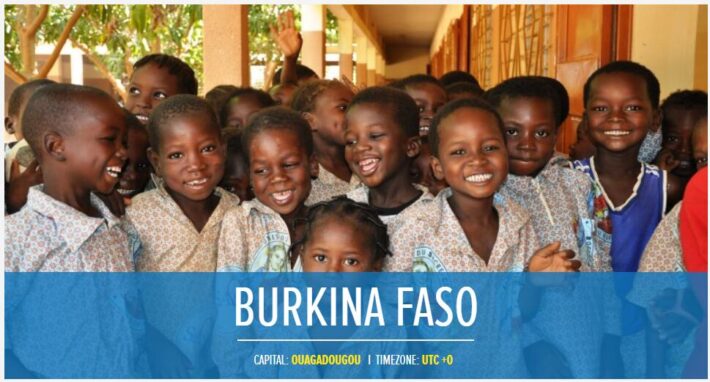 In the administrative elections of 1995 Compaorè saw the establishment of the Organization for People’s Democracy – Labor Movement, its creature, and in February 1996 this Organization became part of another political grouping, favorable to Compaorè, the “Congress for Democracy and Progress “, of which A. Bognessan Yè and vice-president Kaborè became president. The latter, however, left the post of prime minister to D. Ouedraogo, and assumed the office of Councilor of the Presidency of the Republic.

The legislative elections of 1997 were equally won by Compaorè who, two months earlier, with an amendment to the Constitution, had managed to eliminate the limit on the number of presidential mandates. And in November 1998 Compaorè also won the presidential election. In the international sphere, relations with France have always remained close and codial.