The Cameroon’s constitution provides for religious freedom and it is generally respected by the government. Christians make up nearly 70 percent of the population. The Muslims amount to just over 20 percent while 10 percent count as supporters of traditional indigenous religions.

In western Cameroon many European missionaries were Christianized during the colonial era, while the people of the north continued to profess Islam, which reached the area during the 11th century. Even today, most Cameroonians in the western and southern parts are Christian, while the population in the north is mainly Muslim. In the big cities, both Christians and Muslims live.

Throughout the country, there are supporters of traditional African religions that are characterized by animism and religious ancestry. It is common to mix traditional faith with other religions. 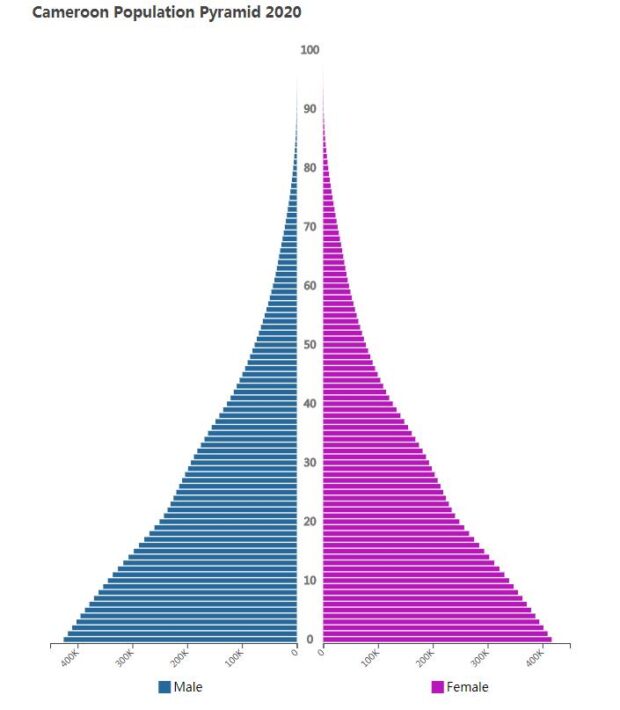 Schools and universities reopened after the closure because of the corona pandemic. However, analysts warn that the spread of infection may continue to be large in the country.

Crisis loan from the IMF

The IMF grants $ 226 million in loans to Cameroon to support the country in the fight against the corona pandemic. The loan is a type of fast loan (Rapid Credit Facility, RCF), which means that the IMF can round out the usually lengthy loan granting process.

The Presidential Office admits that three government soldiers participated in the massacre in the village of Ntumbo in the English-speaking part of Cameroon on February 13 and that 13 civilians, including ten children, were shot dead (see February 2020). The three soldiers acted together with a fulanimilis and attacked the villagers who they believed were separatists. They then set fire to the crime scene to hide the tracks. The government has previously denied that military was involved in the massacre. According to the UN, 23 civilians, including 15 children, were killed in the mass shooting. A separatist uprising is ongoing in the English-speaking regions of the Northwest and Southwest.

Southern Cameroon’s defense force, one of many separatist groups in the English-speaking territories, hears an appeal from the UN to all the world’s warring parties to impose a ceasefire while the corona pandemic erupts around the world.

The first death in covid-19

Cameroon reports its first confirmed death in the pandemic caused by the new coronavirus sars-cov-2. The deceased had just returned from Italy and was ill on arrival in Cameroon. Schools, bars, restaurants and similar public places are kept closed to reduce the risk of contagion.

RDPC wins in the filling election

The ruling party RDPC wins all 13 mandates that are at stake in the election elections in the English-speaking regions of the Northwest and Southwest. Thus, the RDPC takes home a total of 152 of the 180 parliamentary seats. The electoral elections are held eleven constituencies where the result of the parliamentary elections is rejected because of a high level of violence during the electoral process. According to the electoral authority, the elections are being conducted this time in a quiet way, but from at least one district reports of unrest and difficulties will be voted on.

Governing RDPCs are getting rolling

The official election result is reported. The ruling Cameroonian People’s Democratic Assembly (RDPC) has won 139 of the 167 seats in Parliament. The National Union for Democracy and Progress (UNDP) becomes the second largest party with 7 seats, while the Social Democratic Front comes third with 5 seats. Thirteen seats are not distributed as the elections have been annulled in certain constituencies in the English-speaking regions. The turnout is 46 percent.

The election is rejected in some constituencies

The Cameroon Constitutional Council annuls the parliamentary elections in about ten constituencies in the English-speaking regions. These are areas that were affected by extensive violence during the election process.

The data goes beyond what happens when deadly violence erupts in the village of Ntumbo in the English-speaking Northwest region. According to sources from the opposition, 22 villagers, including 14 children, are killed in a massacre carried out by the army. Nine of the children are under five. Eleven of them are girls. The army rejects the accusations and says it is all about an accident. According to an army spokesman, five civilians, one woman and four children, as well as “seven terrorists” should have been killed when fuel tanks caught fire in connection with a fire battle between government soldiers and separatists.

During the election movement, militant separatists in the English-speaking areas kidnapped more than 100 civilians and burned down several polling stations, a post office where election materials were preserved and at least seven private residences belonging to candidates, election workers, etc., reports Human Rights Watch (HRW). The separatists harassed and attacked people who wanted to take part in the elections as voters, election officials, election workers or candidates. Government soldiers and the police also committed “other types of abuse”, HRW writes in its report. Between January 17 and January 20, 2020, the military destroyed over 50 homes and killed several civilians, including two men with intellectual disabilities, according to HRW.

Violence and boycott characterize the election

About 50 parties stand with candidates when parliamentary and local elections are held after being postponed twice. It is seven years since the last parliamentary elections. The election is overshadowed by the opposition party MRC boycotting the process due to fear of cheating on the part of the ruling RDPC. MRC leader Maurice Kamto is abroad. The country’s largest opposition party, the Social Democratic SDF, is running for candidates after some hesitation. The election movement is described as dimmed. In the north, it is particularly difficult to carry out an electoral movement because of the threat from Boko Haram. In the English-speaking areas, separatists are trying to stop the election. In the days before the election, separatists are kidnapping several candidates, election officials and people carrying a voting card, the Voice of America reports.

Two villagers are killed and about 20 houses burn down when a village in northern Cameroon is attacked. Boko Haram is suspected to be behind the raid. At the time, the perpetrators stole a number of motorcycles. According to Cameroonian authorities, the Islamist extremist group has conducted nearly 13,000 raids into the country since 2014.