Christianity is the largest religion in the Central African Republic, but there are also Muslims and animists, that is, practitioners of traditional African religions. Mixing Christianity with elements of ancestral worship and religious belief is common.

Current figures on how many people profess their religion are missing as the majority of all Muslims left the country during the fighting that has been going on since 2012 (see Political system and Modern history).

Before 2012, approximately every other resident was a Christian, half a Protestant and half a Catholic. Nearly one-sixth of Central Africans were Muslims. The remaining third were animists or non-believers. 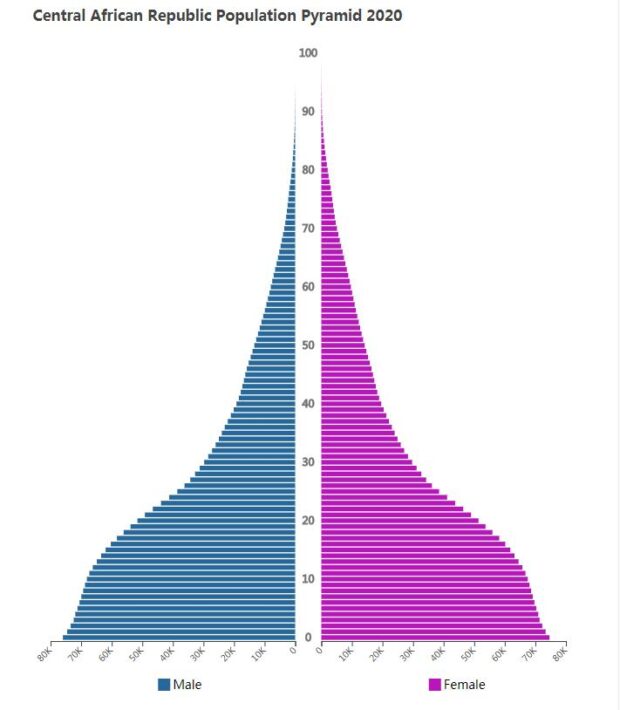 New setback for the peace process

The militia group 3R jumps off the peace agreement signed by the movement along with several other armed groups last year (see February 7, 2019). At the same time, the group leader Sidiki Abass claims that the 3R is stuck to the peace process itself if only the “threats and provocations cease”. The UN force in the country has warned Abass to, in violation of the peace agreement, try to expand the area that 3R controls. In April, seven other militia groups jumped from the peace work because they felt that the government had failed to fulfill its commitments (see April 25, 2020). Presidential elections are scheduled for December.

Warlord is seized by UN force

One of the country’s warlords, Azor Kalite, is arrested by UN forces Minusca along with eight of his militia. Kalite is suspected to have been behind much of the violence that has taken place in the Northeast in recent months. At the end of April, nearly 30 people were killed in fighting in Ndele, known for its rich mineral deposits. The arrest took place at the request of the Special Tribunal established in 2018, whose task is to investigate three categories of serious crimes: crimes against humanity , war crimes and genocide.. A few days later another nine militiamen were arrested, this time in the southeast. The arrested belong to the Union of Peace in Central Africa (UPC), which is one of the country’s largest rebel groups. The UPC is accused by the Special Tribunal of committing “widespread and systematic attacks on the civilian population”.

An attempt to end the fighting in the north, in which President Faustin-Archange Touadéra in mid-April held talks with Ali Darassa, leader of the Union for Peace in Central Africa (UPC), and Prime Minister Firmin Ngrébada, with Abdoulaye Hissène, who heads a rebel movement Central African Republic’s rebirth (FPRC) fails. It instead leads to seven militia groups, including the UPC and the FPRC, now canceling all involvement in government work and accusing the government of not fulfilling its commitments. They demand, among other things, prisoners to be released and comprehensive reforms of the political system. From the beginning, the militia leaders were dissatisfied with not having received any heavy ministerial posts. Later in April new battles erupt in the Northeast, demanding nearly 40 lives. It creates further uncertainty about whether the presidential election will be held in December as planned. The political opposition and representatives of civil society have already said no to proposals to extend the president’s and parliament’s mandate for elections cannot be lost.

UN Security Council introduces sanctions against rebel leader Abdoulaye Miskine (see also March 2020). His militia group Central African People’s Democratic Front (FDPC) signed a peace treaty in 2019, but Miskine is now said to be looking for combatants for his militia. He is now being charged with a travel ban and his assets are frozen.

Three respirators throughout the country

Concern is great about how a country like the Central African Republic can cope with an outbreak of the infectious viral disease covid-19. There are only three respirators in the entire country. Other protective equipment purchased by the Christian aid organization World Vision appears to have gone astray. There is also a risk that a vaccination campaign against measles must be canceled, due to a lack of vials, which are usually flown in from France. However, a first part of a measles vaccination campaign has ended.

The first case of covid-19 is reported

The first case of the covid-19 viral disease is reported from the Central African Republic. The infected is an Italian man living in the country who recently returned from Milan.

Green light for a truth commission

Approves a bill that paves the way for the establishment of a Truth and Reconciliation Commission; War and internal strife have characterized the country since independence from France in 1960. The Commission, which will work for at least four years and is intended to become a platform to honor the victims and give voice to the many thousands who have suffered severe atrocities. A previous commission with roughly the same mandate was established in 2003 but failed, among other things, for failing to investigate crimes committed by the then-incumbent President Bozize who took power in a coup.

Twelve militiamen are killed in clashes with UN troops

Twelve members of the Central African Republic’s rebirth (FPRC) militia are killed in clashes with UN troops in the city of Birao, in the northeastern part of the country, near the border with Sudan. The UN force Minusca states that the fighting erupts since the FPRC attacks the city from three directions, including an army base and a place where refugees gather.

The massacre of 72 civilian Muslims and twelve UN soldiers in the city of Bangassou, in the southeastern part of the country, has now been postponed by a court in Bangui (see May 2017). In addition, a Christian so-called anti-Balaka militia kept 2,000 civilian Muslims locked in a cathedral, where they fled the violence. Five anti-Balaka leaders are sentenced to life imprisonment for crimes against humanity . The verdict is seen as historic since few have been punished previously for similar abuse. But the violence is still widespread in the country and of the 2000 who were forced to flee, only 145 have returned to their homes.

Following last month’s fierce fighting between government troops and the rebel group Union for Peace in Central Africa (UPC), UN peacekeeping forces have taken control of the city of Alindao in the south. Despite the peace agreement (see February 7, 2019), the fighting in the country continues. A few days later, the Government calls on the African Union (AU) and the regional cooperation organization ECCAS to take a tougher hold on the armed groups that violate the peace agreement. Although the agreement is almost a year old, various rebel movements still control about two-thirds of the country’s territory. Human rights violations, sexual abuse and murder are still widespread, warns Amnesty International .

Bozizé says he can participate in the presidential election

Former President François Bozizé says that if he wants, he will be able to stand in the December presidential election. This is despite the sanctions imposed by the UN against him for his role in the conflicts in the country. Among other things, he is accused of crimes against humanity . However, he says that whether he is running as a candidate or not depends on what his party, the National Collective Movement Kwa Na Kwa, chooses to do. Michel Djotodi, the man who overthrew Bozizé from power in 2013, has also returned to his homeland. He is still leading the country’s largest rebel group Central African Republic (FPRC) rebirth.

At least 50 dead in fighting in Birao

The unrest in the market town of Birao continues. At least 50 people are killed. The latest outbreak of violence is due to ethnic contradictions within the country’s largest militia group, the Central African Republic’s Rebirth (FPRC). It is people from the runga people who have ended up on a collision course with people from the kara and yellow people. The conflict is largely about who can make money from the trade of diamonds from the area. The militias in the area earn money from collecting taxes from the population and conducting their own justice.

The UN Security Council relieves arms embargo against the Central African Republic. This means that the country can buy new military vehicles from Russia. The issue has caused tensions between the old colonial power France and Russia. At the same time, the Security Council votes to extend the arms embargo for six months, according to a proposal from France. Russia and China, which support the Central African government’s desire for the arms embargo to be lifted, abstain.

Two of the militia groups that signed a peace deal in 2019 reunite in the market town of Birao, near the border with Sudan. Conflicts between the Central African Republic’s rebirth (FPRC) and the Movement for Central Africa’s Freedom Fighters for Justice (MLCJ) have flared up from time to time since the summer of 2019. In July 2019, at least 20 people were killed in similar clashes, according to UN forces Minusca. The fighting is condemned by the Bangui government.

Six years after his departure, former president Michel Djotodia returns to his homeland. He promises to support peaceful development in the country. The former rebel leader named himself the country’s first Muslim president in 2013 (see March 2013). Ten months later he was forced to resign because of international pressure and has lived in exile in Benin

For the first time in 20 months, police, along with UN troops, are again patrolling the troubled PK5 district of the capital Bangui, which now has a mostly Muslim population. PK5 has for many years been the scene of unrest and violence. An attempt to disarm the militia that ruled the district in 2018 failed completely and the police were forced out of the area. Several people were killed (see April 11, 2018). The militia has continued to rule over the PK5 district and demanded that the traders in the area pay “tax”. Last month, the businessmen had enough and raised weapons against the militia (see December 26, 2019).