The Central African Republic is, as its name indicates, a republic located approximately in the middle of Africa. The country is almost twice the size of Norway, and in 2019 had 4.83 million inhabitants. It has no coastline, and borders Chad in the north, Sudan and South Sudan in the east, DR Congo and the Republic of Congo in the south and Cameroon in the west – an area of ​​much conflict and political instability.

The Central African Republic (SAR) is characterized by porous borders and a deficient state apparatus with little ability to control conditions outside the capital Bangui. The country’s history has been characterized by violence and a number of coups. Since the coup in 2013, the situation in the country has been particularly precarious, and is described by the UN and other international organizations as a crisis. In 2019, 60 percent of the country’s population depended on aid and protection.

The Central African Republic has approx. 600 registered bird species. In the picture you see a purple turquoise bird. The bird is a resident of West Africa and occurs in tropical savannas and forests.

The Central African Republic is located approximately 500 kilometers north of the equator and holds a considerable biodiversity of its 622,984 square kilometers. The northeastern part of the country consists of larger savannah areas and gallery forests that vary considerably in lushness and accessibility depending on whether the country is in one of the two rainy periods (March-May or July-October) or whether it is in a drought period. The southwestern part of the country has a more stable humid climate and deep rainforests.

The average temperature fluctuates little between the coldest and warmest months of the year and is between 24 and 27 degrees Celsius. SAR has relatively little good agricultural land, and much of the land consists of red clay soil and laterite. During the rainy season, the rivers swell, and especially the southeastern parts of the country become virtually inaccessible.

The wildlife of the Central African Republic is threatened with poaching; the number of elephants has been greatly reduced and the rhino species have almost disappeared. However, the country has more than 200 mammal species and more than 600 registered bird species. On the savannah live among other things baboons, elephant, lion, buffalo, giraffe, pointed and stump horns, hyenas, wild dogs, antelope species and warthogs, birds of prey and vultures. In the rainforest there are chimpanzees, maracats,leopard and in the rivers including hippopotamus and crocodile. In addition, there are about 189 species of reptiles, 29 species of amphibians and numerous insect species.

The population of the Central African Republic has almost quadrupled since 1950 and is expected to double further by 2050. French and Sango are official languages, and in total SAR has 72 living languages, often called dialects by the locals themselves. Gbayane makes up 33 percent of the population and is the largest population group in the country.

Eighty percent of the country’s population identify as Christian (most of these Protestant or Catholic), while just over 15 percent are Muslims (mainly Sunni Muslims). Five percent are considered animists, but most Christians and Muslims have clear elements of animism in their faith.

The national anthem of the Central African Republic is ‘La Renaissance’. The Sango version is called ‘E Zingo’. 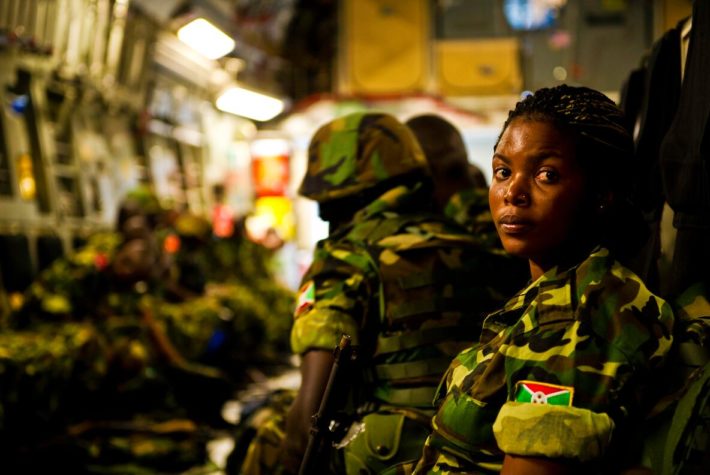 A soldier from neighboring Burundi. In coordination with the French military and the African Union, the US military has provided air transport support to transport Burundi soldiers with food and supplies to the Central African Republic.

The head of state, the president, is elected in general elections for five years, with the possibility of one re-election. The incumbent president, Fautsin-Archange Touadéra, was elected in 2016. The president appoints the prime minister and the government, who are in charge of a two-chamber parliament. Parliament and since the country got a new constitution on March 27, 2016 consisted of a national assembly and a senate. The National Assembly has 105 members who are elected in general elections for five years at a time, while Senate members are elected for five years at a time through indirect elections. However, military coup has been the most common form of power transfer.

The SAR is divided into 14 administrative prefectures, two economic prefectures and an autonomous municipality (the capital, Bangui).

Military conscription takes place as in Norway after selection, and the initial service is 24 months. The country has an army and an air force, as well as paramilitary forces.

The Central African Republic is a member of the UN, the African Union, the World Bank, the World Trade Organization and the International Monetary Fund, among others.

Central African Republic. In 1977, the country’s president Jean Bédel Bokassa won the crown as emperor in a lavish and much-talked-about ceremony with Napoleon 1 as a role model. A large part of the expenditure was paid by French means. At the same time, criticism of human rights violations grew both domestically and abroad, and a French-controlled coup set him off in 1979.

There are traces of human settlement in what we today call the Central African Republic 10,000 years back in time. Between 2000 and 1000 years before our time, people poured in from other areas. The population lived in scattered villages without any institutionalized or centralized leadership.

Signs of growing crops from the American continent, such as corn, tobacco and manioc, as early as the 18th century indicate that people in the area were in contact with traders from other regions. From the end of the 19th century, this contact increased as traders and executives in surrounding areas built up a trading network that extended into North Africa. With the influx of new players, the Sultanates gradually became subordinate to larger political entities such as the Sultanate of Wadai and the Fulani kingdom of Sokoto. slave Tradewas a lucrative part of the trade of these kingdoms and slavery and forced labor (often in collaboration with the increasingly influential France) drove large sections of the population out of what today constitutes the Central African Republic.

France annexed the area in the 1880s, established the French colony of Oubangi-Chari in 1894, and killed the sultans they had previously collaborated with. It soon became clear that the new colony was not very lucrative, and after trying to swap it for a land in the Gulf of Guinea, France chose to divide the colony and lease out areas to private players. Both the French colonial power and the private actors’ operation of Oubangui-Chari entailed widespread use of violence, and the locals responded with several attempts to revolt against the Western regime; Best known is the Congo-Wara uprising between 1928 and -1931.

In 1946, the colony became an overseas territory of the French Union. Barthèlemy Boganda was elected to represent the territory of the French parliament and, after leading an independence movement, became the first prime minister of the Central African Republic when in 1958 the country gained the status of an independent republic within the French community. Boganda died in a plane crash in 1959 and David Dacko became the country’s first president at independence in 1960.

Jean-Bédel Bokassa led a successful military coup in 1966 and became world famous after being crowned emperor for life in 1976. Bokassa had considerable support from France. Poor governance and falls in international commodity prices led the country into economic downturns in the 1970s. France eventually returned to support Dacko, who took power in a military coup in 1979. In turn, Dacko lost power to General André Kolingba in a new coup in 1981. After the introduction of a multi-party system in the country, Ange-Félix Patassé was elected became president in 1993. In 2003, François Bozizé seized power with the help of Chad’s president Idriss Déby. Bozizé was subsequently elected president in 2005 and 2011, and was both charged with electoral fraud.

After much frustration with his government, Bozizé lost power in a military coup in 2013, led by a coalition of rebel groups under the name Séléka (‘ alliance ‘ on sango). A high level of violence with sectarian overtones meant that Séléka’s leader, Michel Djotodia, had to step down in 2014 and Catherine Samba-Panza was appointed interim president. She was later replaced by incumbent President Faustin-Archange Touadéra in a 2016 general election.

The economy of the Central African Republic is among the world’s weakest. The country is still struggling with the late effects of the international fall in commodity prices in the 1970s. It has a negative trade balance with foreign countries, a lack of payment of salaries to public employees, a wide poverty line and a large informal economy that gives the state low tax revenues.

The SAR is one of the least developed in the world, and was ranked as the world’s most unhappy country on the 2017 UN happiness index. Manioc, cotton, millet, corn, peanuts, rice and coffee are among the most important growths.

Just over 40 percent of the country is covered by forests and it has deposits of oil, gold, diamonds and uranium. It is common to refer to the country’s wealth of resources as a possible source of future development. However, resources such as oil and uranium are difficult to extract, lack of infrastructure limits the opportunities for timber exports, and the deposits of diamonds and gold are very widespread. Moreover, up to half the export of diamonds is illegal and does not benefit the country. 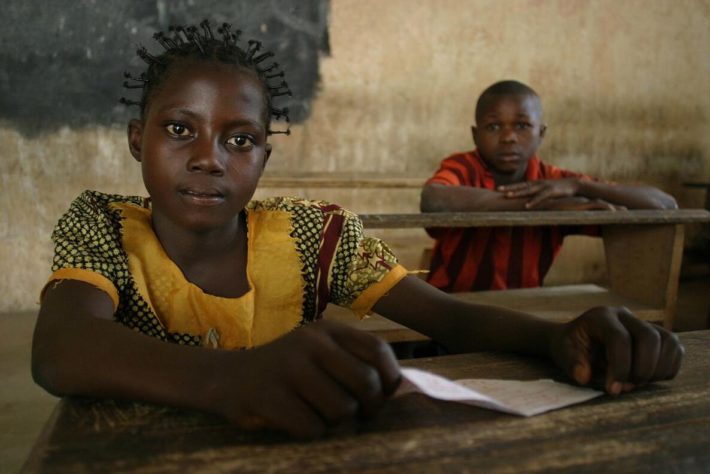 All children between the ages of 6 and 14 are entitled by law to free and compulsory education in the Central African Republic. However, a lack of salary payments to teachers and several years of war has led to a significant drop in the proportion of children in primary school. Just over 40 percent of the adult population of the Central African Republic is illiterate.

All children between the ages of 6 and 14 are legally entitled to free and compulsory schooling. However, a lack of salary payments to teachers and several years of war has led to a significant drop in the proportion of children in primary school. The figures are uncertain, but a conservative estimate indicates that less than 40 percent of the country’s children in this age group receive education.

High school is two-fold, 4 + 3 years and there are 3 universities in the country. The quality of education at these institutions has decreased significantly since the 1980s.

SAR has a handful of newspapers with small print and some local radio stations, as well as one state radio and television company, Radio-Télévision Centrafrique.

The poet and novelist Pierre Makombo Bamboté was in 1962 the first Central African writer to be published; best known is the novel ‘Princess Mandapu’. Another prominent author is Étienne Goyémidé with the novel ‘Le Silence de la Forêt’ about the life of the pygmies. Two other well-known authors are Blaise N’Djehoya and Cyriaque Yavoucko.

Folk music is based on the different folk groups. The vocal music is mostly unanimous, but the ba-benzele pygmies have a rich vocal polyphony. Commonly used instruments include flutes, drums, xylophones and rattles. In the cities, Western and Afro-Cuban music dominate.