The news of the confirmed presence of Chad was handed down already in the Middle Ages by the first Arab travelers and in 1564 it was already found in the cartography of G. Gastaldi.

In the modern era, there were several trans-African expeditions that followed one another until the end of the 19th century.

But a real systematic exploration was initiated by the French in 1902, conducted by Colonel Destenave, together with many explorers, scholars and officers, including the commander Jean Tilho who since 1904, and for a quarter of a century, devoted himself entirely to the study of the territoio.

According to Abbreviationfinder, an acronym site which also features history of Chad, France took possession of the region and already in 1898 with an Anglo-French treaty the borders with Sudan and Libya were established, by agreement with Italy.

On May 29, 1900, the capital, Fort Lamy was founded, and in 1920, with a precise organization, the colony became part of French Equatorial Africa.

Colonization began immediately and in 1928, with the construction of an automobile road, businesses were able to expand, until then very limited due to the lack of communication routes.

On August 13, 1960, the territory of Chad became an independent Republic, but always within the French Community, and in the following September it was admitted to the United Nations.

The elected president was Francois Tobalbaye; his “Progressive Party of Chad” was a single party since January 1962, after the elimination of all other political organizations. With the Constitution of April 1962 the Presidential Regime was established.

The political-bureaucratic elite, coming from the southern areas with black and Christian populations, had the strongest opposition from the northern Arab-Muslim populations, nomads, unable to submit to any order and authority.

In 1963, in fact, a special Criminal Court was set up to suppress all the unrest and in 1965 there was a real rebellion, of which Sudan was also accused, starting from the “Chad Liberation Front”.

The most heated demonstrations occurred right from 1965 when the French, while maintaining control of the Saharan centers, withdrew their forces from the northern regions.

In 1967 an anti-government conspiracy occurred and the author, Minister S. Selingar, was eliminated.

In 1968 Tombalbaye, to quell the various dangerous riots, was forced to ask for the intervention of French troops. The result was a ferocious guerrilla war that worsened in 1969. In that year Tombalbaye was re-elected president and in 1971, in order to reconcile the eastern and southern populations, he promulgated measures of economic and political relaxation by granting amnesties and agreements.
In 1971 there was an attempted coup, perpetrated by the “National Liberation Front” with the help of Libya, with which relations were broken.

But political stability did not last long; already in 1973 other unrest occurred in Chad, where, moreover, a nationalistic trend was expanding more and more. This was even shown in the denomination of people and things; so the name of the president was no longer Francois but N’Garta and the capital was called N’Djamena.

The “Democratic Revolutionary Movement of Chad” was organized in Paris but its leader, the former minister O. Bono, was assassinated shortly after and in 1973 relations with France deteriorated, which was restored the following year and enshrined in a visit to Paris by Tombalbaye.

He signed a new military assistance pact with France in March 1975 and was assassinated in April following a coup d’état led by General Felix Malloum who assumed power at the head of a Supreme Military Council. A regime was established that promised democratic freedoms, first of all religious.

There was also the fragmentation of the state between the various “Warlords” and General Malloum came to terms with the various factions of the “Front”. With the head of one of these factions, H. Habrè, an agreement was reached in Khartoum in 1977, by virtue of which the following year, with a provisional Constitution, Habrè became head of government and Malloum head of state.

But the agreement between the two was of very short duration and already in February 1979 there was an open war between them. Nigeria had to intervene as a mediator and in August a government of provisional national unity was formed, chaired by Goukoni Ueddei, a very important person of the “Front”. In this government Habrè was Minister of Defense and soon began to oppose the President who in 1980, with the help of Libya, forced him to flee.

A “peacekeeping force” of the United Arab Organization intervened in Chad and the Libyan military were forced to leave the country.

In June 1982 Habrè, aided by the United States who wanted to strike through him Gaddafi, Libyan president, waging a rebel war, managed to occupy the capital and make himself recognized as president.

In 1983, since Libya had sent its troops to help Goukouni, France did the same to help Habrè.

Chad found itself split in two. France was inclined to reach a compromise with Libya, but Habrè did not agree and with his own strength he managed to recover all the territory, except for the Aouzou strip, occupied by Libya since 1973.

In 1987 the war ended with Habrè’s full victory. All the belligerent forces withdrew and the controversies recomposed. Habrè reestablished relations with Libya in 1988 and began negotiations for the Aouzou strip. In December 1989 the new Constitution was promulgated which conferred full powers on the President and Habrè was re-elected for another seven years. 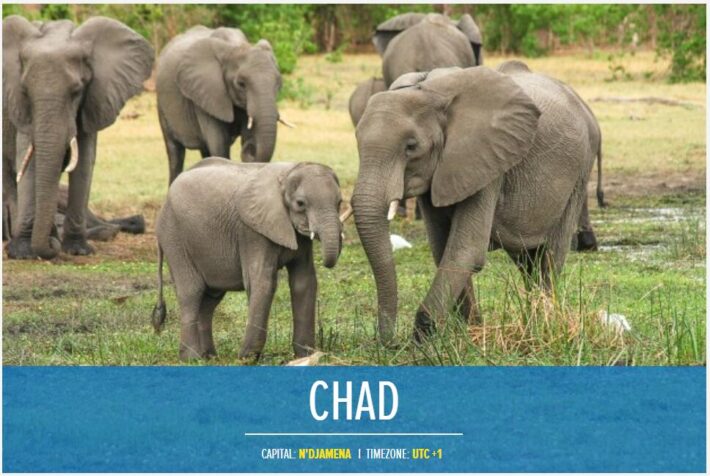 In July 1990 he had full consensus in the political elections and yet in November he was deposed with a coup d’état, led by Colonel Idriss Deby, head of the “Patriotic Salvation Movement”, supported by Libya.

Deby immediately set himself the main goal of his program to bring the state back to democracy. Since armed struggle was still raging, in March 1991 a National Charter was approved with which, in addition to reaffirming Deby head of state, a National Conference was convened. After some postponements, this conference took place in January 1993; he immediately appointed a Supreme Council that had the task of preparing multi-party elections, while still confirming Deby in his office.

In March 1996, after the definitive achievement of the “ceasefire”, a referendum was held which approved the new Constitution. In July the presidential elections were won by Deby and in January-February 1997 the legislatures were the prerogative of the “Patriotic Health Movement”, to which Deby himself belonged.