The Democratic Republic of Congo has undergone major internal crises and power struggles, including the coup d’état and civil war, since the 1990s, and has been the subject of interference and warfare from neighboring countries. Ethnic contradictions have been used and reinforced in the struggle for power and resources, and central authorities have had little control over the entire territory of the country.

The genocide of Tutsis in neighboring Rwanda in 1994 had major consequences for Congo, which was then called Zaïre. Over one million refugees, and eventually Hutu militias, sought refuge in eastern Zaire, primarily around Goma in Kivu. At the same time, Zaïre was on the brink of economic collapse because dictator Mobutu Sese Seko had stolen huge sums from the Treasury, and after many decades of mismanagement, the state apparatus was unable to cope with any kind of crisis.

Mobutu was close friend and longtime supporter of Rwanda President Habyarimana, who was hutu. When Habyarimana was killed in 1994, often seen as the trigger for the genocide, Zaïre supported the Hutu people in Rwanda. Hutu militias seeking refuge in Zaire after the genocide formed rebel groups east of the country when a Tutsi-dominated government took over in Rwanda. 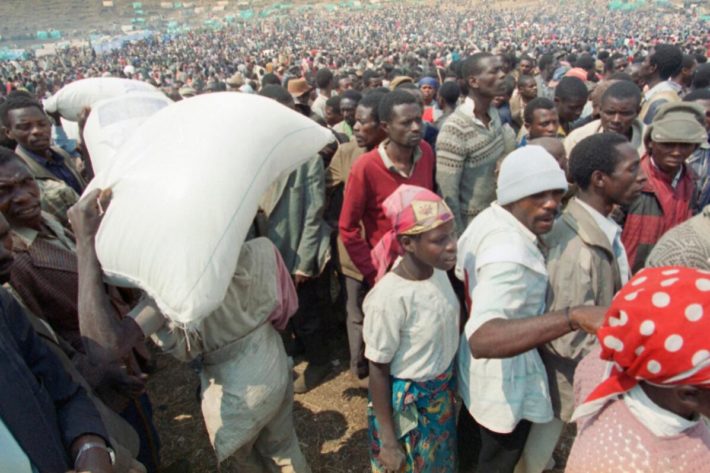 Following the 1994 Rwanda genocide, the refugee situation in eastern Congo was unsustainable. Mostly, 1800 refugees died every day from illnesses and food and water shortages. Since then, Eastern Congo has been very vulnerable to insurgency and conflict.

Zaire also has a Tutsi population, the so-called banyama mules in southern Kivu and banyarwanda in northern Kivu. Especially banyamulenge groups were threatened by both Hutu militias and the Congolese army in Zaire and found military support in the new Tutsi regime in Rwanda. In October 1996, an armed uprising broke out in eastern Zaire.

The state collapse in Zaire and the aftermath of the Rwandan genocide formed the backdrop for the outbreak of the 1996 war. ensure. When certain ethnic groups feel absolutely threatened – such as in a genocide – this creates enormous fighting will.

More specifically, the uprising in 1996 was triggered by an ethnic land conflict in southern Kivu east of Zaire, where around 300,000 banyamulenge (Tutsis) had been deprived of their Zaire citizenship by 1981 in order to leave Zaire, which in practice made them state-run. and lawless. A group of armed banyamulenge attacked the Rwandan Hutum militia, Interahamwe, which was hiding in eastern Zaire, and Zaire government forces. Rwanda responded by invading North Kivu because they believed the Hutu forces in Zaïre were both attacking targets in Rwanda and working to overthrow the new regime there.

With support from Rwanda, the banyamulenge militia took control of parts of eastern Zaire in October-November 1996. The rebellion gathered several opponents of the Mobutus regime, under the umbrella of the Alliance des forces democratiques pour la libération du Congo-Kinshasa (AFDL), led by Laurent. Désiré Kabila.

The rebellion in eastern Zaire began in the fall of 1996, and soon the AFDL rebel group had conquered the provincial capital of Goma. On April 5, 1997, 4,000 soldiers gathered at Goma Airport to meet the leader Laurent Kabila.

The AFDL quickly took control of the provincial capitals of Bukavu and Goma, and moved further west and south. Despite a counter-offensive from Mobutu’s government, the rebels quickly took control of much of the country. When the strategically important cities of Kisangani and Lubumbashi fell, the UN drafted a ceasefire plan, but this was rejected by the insurgents, who continued the march towards the capital Kinshasa.

To end the war, the United States urged Mobutu to step down. Also South Africa under the leadership of Nelson Mandela attempt to mediate forward a negotiated solution, but the talks did not succeed. The cancer-sick Mobutu went into exile to Morocco on May 16, 1997, and the day after, the AFDL captured the capital Kinshasa. The rebel leader Kabila appointed himself president, and the deposed dictator died in exile later that year.

Laurent-Désiré Kabila established a presidential government and abolished the prime minister’s post; political parties were banned for a transitional period. The country’s old name Congo was taken back and added to the Democratic Republic, although it was neither democratic nor particularly Republican, since Kabila was neither elected nor governed by state law.

Kabila’s takeover of power temporarily led to relative stability, but the situation remained uncertain, partly because hutum militia from Burundi and Rwanda still remained in the country. So did armed groups from Uganda, while Angolan forces stayed in southern Congo.

It was Tutsi forces that had lifted Kabila to power, causing distrust among many Congolese. He struggled to gain support in the population because many believed he was a puppet ruled by the powerful warlords in Rwanda and Uganda, and that the Tutsi groups banyamulenge and banyarwanda in eastern Congo gained benefits in terms of access to land and mineral deposits.

Kabila thus faced a dilemma: Should he continue to be dictated by Rwanda and Tutsi forces in eastern Congo to retain power, or should he cut ties and win the people’s support in Congo? He chose the latter, and in 1998 – one year after he came to power, he broke the ties with supporters in Rwanda and Uganda. That led to a new war – this time of international size.

The rebellion that started against Kabila in eastern Congo in 1998 quickly developed into a far more extensive war than the one he had led from the same area two years earlier. Congo was in practice divided into three: In the west, Kabila’s government ruled, in the east Rwanda and their allies ruled, and in the northeast, Uganda and their allies ruled. Rwanda and Uganda were allies, but also had different interests and groups they supported.

Several Congolese groups participated in the uprising. Particularly the Rassemblement congolais pour la démocratie (RCD), which consisted of soldiers of Tutsi origin and supported by Rwanda and Uganda, among others, threatened the Congo’s regime in the west.

Congo has virtually no coastline, and as many as nine neighboring countries – many with major internal conflicts. Most major cities in the Congo are bordered. This makes the country both vulnerable to and totally dependent on neighboring countries, both when it comes to trade and the economy, as well as conflict and population movements.

The government forces were too weak to fight the rebellion, and as the Rwanda and Uganda-backed RCD forces approached Kinshasa, Kabila sought support from Angola, Namibia, Chad, Zimbabwe and Sudan, which sent military units to Congo.

Contributions from Angola, Namibia and Zimbabwe came through the Southern African Development Community (SADC) regional organization, which Congo joined in 1997. Zimbabwe President Robert Mugabe was the driving force behind the SADC initiative and sought to join several countries in a government effort in a Member State, which he believed was subject to aggression from other states.

In particular, the French-speaking countries of Central Africa supported Kabila politically. They feared that the new and militarily strong Tutsi-dominated regime in Rwanda, closely linked to Uganda, would become too dominant and that they would develop a new center of power in central Africa, where eastern Congo, or the entire Congo, would incorporated.

Congo’s large deposits of sought after minerals helped to intensify the conflict. Control of mineral extraction was important in financing the war, but many also saw an opportunity to make big money in a chaotic situation.

State-owned and foreign companies received licenses for mineral extraction by both Kabila’s government and the rebel groups. This has created conflicts of ownership for a long time. The UN has documented that particularly Angolan, Rwandan, Ugandan and Zimbabwean interests have been particularly active; Angola, Rwanda, Uganda and Zimbabwe were also the most active countries in the war.

The war in Congo, which lasted from 1998 to 2003, was therefore a complex conflict, which was not only about Congo’s own contradictions and future, but also involved several old conflicts in other African countries, which were now being fought on Congolese territory.

The human cost has been very high. The death toll is uncertain due to a lack of statistics both before, during and after the war. In addition, people in the region are generally vulnerable even in the absence of war. Mortality, and especially child mortality, is normally high. However, conservative estimates indicate that between one and two million people died as a result of the war.