In 2000, President Kabila gave in to pressure and announced political reforms. Nevertheless, both military and political opposition to him grew. In January 2001, the president was killed in an assault by a member of his own security forces.

The president’s inner circle appointed his son Joseph Kabila as his father’s successor. He set a more conciliatory tone to the regime’s opponents and agreed to negotiations on Congo’s future, with international mediation. In 2002, he established the Party Parti la la Reconciliation et le développement (PPRD), and entered into an agreement on the distribution of power with other parties, notably the Uganda-supported Mouvement de libération du Congo (MLC), but was rejected by the Rwanda-supported Rassemblement congolais pour la democracy (RCD).

He also signed peace agreements with Rwanda and Uganda so that the military forces from these two countries were withdrawn from the Congo. Other countries’ soldiers also left Congo in 2002. However, in the east, fighting between the government forces and rebels, including neighboring countries, continued. The UN force MONUC, which had been in the country since 2000, reinforced its presence in eastern Congo and became involved in combat operations. 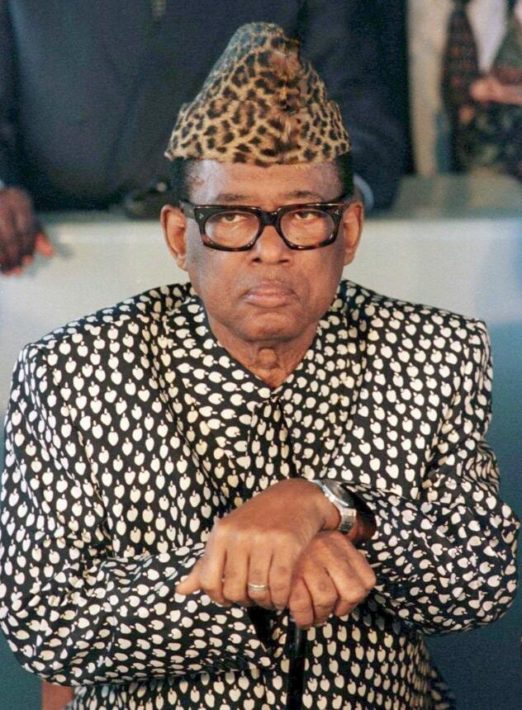 Dictator Mubutu Sese Seko ruled Zaïre until Laurent Kabila took power on May 17, 1997. Here, Mobutu is pictured during a meeting with Kabila and South Africa’s President Nelson Mandela on May 4, twelve days before the cancerous dictator went into exile and never came back.

In June 2003, the government and rebel groups finally reached an internationally negotiated peace agreement. It laid the groundwork for the distribution of power and gave way to insurgents in the Congolese army. Under the agreement, Kabila was elected president for two years, and a two-chamber parliament, with wide participation, opened in August. Some groups stood outside the peace process or broke with the government, continuing their military operations, especially in the Kivu provinces, but also in Ituri, Katanga and Kasai.

In 2006, a new constitution was passed, which required democratic elections every five years. The first parliamentary elections were held in 2006, with great financial and logistical assistance from the UN through MONUC, and a number of parties and candidates voted for the election. The biggest was Joseph Kabila’s Party of Reconstruction and Democracy (PPRD).

In the presidential election, 32 candidates ran for election, and in the second and decisive round, Kabila won over Jean-Pierre Bemba from the MLC. After both rounds, violence broke out between Kabila and Bemba supporters, especially in Kinshasa. The violence underlined the fragile peace and the still unstable conditions in Congo. The presidential election also showed a regional and partly ethnic divide in the population, with Kabila gathering the largest support in the Swahili-speaking eastern part of the country, while Bemba dominated in Kinshasa and Western Congo, dominated by lingala speakers. After the election, Bemba went into exile in Belgium, and was later extradited to the International Criminal Court in The Hague, where he was indicted and convicted war crimes and crimes against humanity.

Five years later, Kabila won the presidential election again, this time against Etienne Tshisekedi. Both Tshisekendi himself, other parts of the opposition, international press and researchers thought the election was characterized by cheating and irregularities. However, the African Union, which monitored the election, found no significant irregularities. There is little doubt that there were both technical and political challenges in this election. Technically, there were particular problems associated with getting polling stations, ballots and other registrations in place in demanding terrain. But politically, there was also a strong media presence for Kabila and a lack of transparency in the Election Commission voting count.

According to the plan, a new presidential election was to be held in 2016, where Kabila did not have the right to stand after the constitution because he had already been elected for two terms. However, the election was postponed indefinitely, and Kabila has been seated. In 2017, many, especially young, Congolese took to the streets to demonstrate against the regime. Police and the military used some brutal means to put an end to the riots. Establishing a real democracy in the Democratic Republic of Congo has thus proved difficult.

A very controversial election was held in December 2018 and the Election Commission announced that Felix Tshisekedi had won on January 10, 2019. Several opposition politicians were excluded from the election, parts of the North Eastern provinces did not get a vote and independent sources show that Martin Fayulu won the election with large margin. Still, Tshisekedi was deployed as DR Congo’s president. 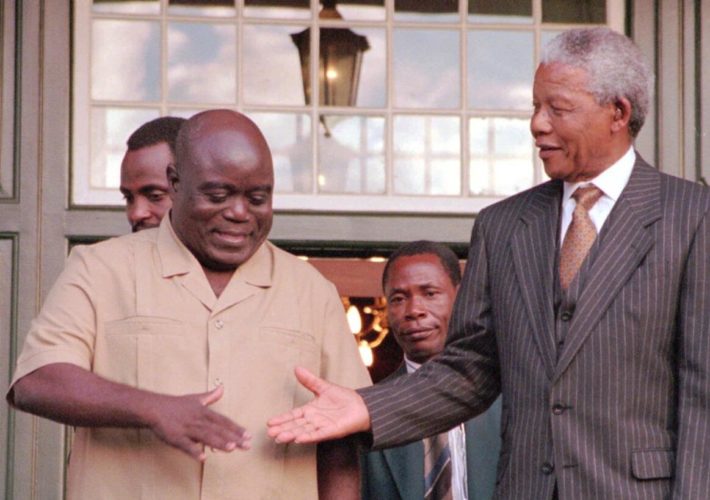 South African President Nelson Mandela (right) assisted in mediation between rebel leader Laurent Kabila and dictator Mobutu Sese Seko. Here, Mandela and Kabila meet in South Africa on April 16, 1997, one month before Mobutu went into exile and Kabila took over power in Zaire, which he soon named the Democratic Republic of Congo.

Neither the local nor the regional power struggle in eastern Congo really ended the peace treaty in 2003. Both Uganda and Rwanda continued to support militia groups active in the Congo, and the latter in particular contributed to the leadership of the Congrès national pour la défence du peuple (CNDP) under leadership by General Laurent Nkunda grew up big and powerful. Kabila signed an agreement with Nkunda at the turn of the year 2006/2007 to integrate the military soldiers into the Congolese army. The deal was broken and the fighting continued. In 2009, Rwanda withdrew its support for the rebel leader, and when Nkunda was arrested in Rwanda, Bosco Ntaganda took over the leadership of the CNDP.

In a new attempt to halt the civil war in eastern Congo, the CNDP and the Kabila government signed another peace treaty on March 23, 2009, which included, among other things, an amnesty law for former military soldiers. But several dissatisfied CNDP members decided in 2012 to form their own group called the Mouvement du March 23 (M23), named after this agreement, and started their own revolt against the government demanding political reform and democracy. On November 20, they entered the capital of North Kivu Goma and the UN’s main base. The government soldiers chose to either flee or join the rebellion. This was dramatic, and the M23 now posed a real threat to the Kinshasa government. The government had to make concessions at the negotiating table, and M23 withdrew from Goma after ten days.

In February 2013, eleven African countries, including Rwanda and Uganda, signed a comprehensive peace agreement. The agreement required Congo to implement security reforms and state-building. At the same time, neighboring countries should secure and help Congo where needed.

Congo’s elite has shown both little will and inability to cope with the enormous structural and economic problems facing the country. This is particularly true of land rights and people’s livelihoods, which in turn create enormous potential for the mobilization of armed groups for larger geopolitical interests, often based on ethnic identity. In October 2015, the Congo Research Group spoke to eighty armed groups and factions in North and South Kivu.

Riots have also spread to other parts of the vast country. In August 2016, clashes broke out between the government army and a group in the Kasai region south-west of Congo, closer to Kinshasa. Two international representatives from the UN expert group in Congo were sent to investigate human rights violations on both sides, but ended up being killed in March 2017. The riots continue in both Kasai and the Kivu region.