The Democratic Republic of Congo (abbreviated DR Congo) is a republic in Africa that encompasses most of the Congo Basin. DR Congo borders the Central African Republic and South Sudan in the north, Uganda, Rwanda and Burundi in the east, Zambia and Angola in the south and the Republic of Congo in the west.

DR Congo is among the four most populous in Africa and the ten most populous in the world. The country has a very diverse population with over 250 different ethnicities, with no one in the majority. Most of the people groups are bantu, but there are also Hamitic peoples and San people. DR Congo is very rich in natural resources, both minerals and agricultural products, but many decades of repressive governance and armed conflicts have led to poor utilization of resources. 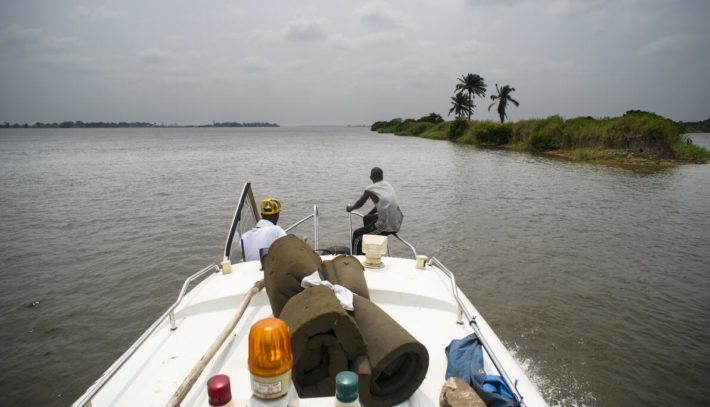 The first traces of people in the area that is today DR Congo are 80,000 years old. The first Europeans came in the late 1400s. From 1877 the country was directly subject to Belgium’s King Leopold 2, under the name Congo Free State. In 1908 Belgium took over as a colonial power, and in 1960 the country became independent. Between 1996 and 2003, the country was hit by two devastating wars, involving many of the neighboring countries.

Congo lion between Kinshasa and Lukolela. The Congo River is the world’s second largest river measured by water flow.

DR Congo is located in Central Africa, with a third of the country located north of the equator. The country has a 37-kilometer coastal strip on the Atlantic Ocean. Most of the country is low-lying and includes large parts of the Congo Basin, the area that carries water to the Congo River. To the east, towards the border with Uganda, lies the Rwenzori mountain range. The highest point, Mount Stanley at 5109 meters above sea level, is Africa’s third highest mountain and lies on the border with Uganda.

The Congo River is after the Amazon world’s second largest river measured by water flow. On average, 42,000 cubic meters of water per second flow out of the estuary. At most, the convoy has a depth of over 220 meters and is the deepest river in the world. 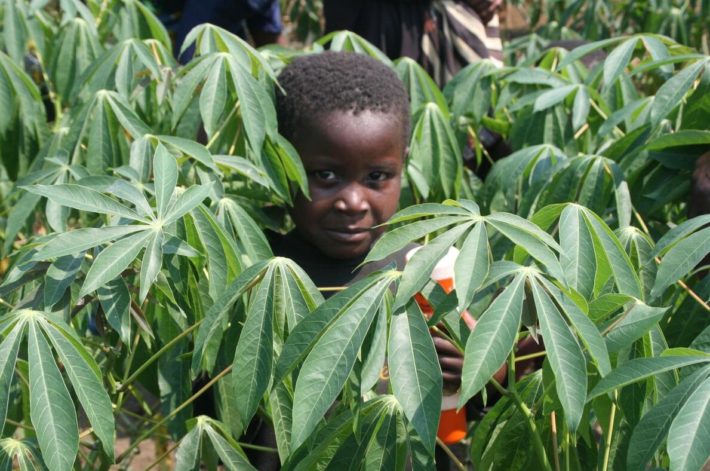 With 2,345,410 square kilometers, DR Congo is the second largest country in Africa after Algeria, and the largest sub-Saharan African country.

The climate is tropical : warm and humid in the lowlands, cool and dry in the southern highlands and cold in the Rwenzori mountains. The Congo Basin consists mainly of tropical rainforests. DR Congo has a rich wildlife, with over 400 different mammals and almost 1200 bird species. Several of the animals are endangered, such as the mountain gorilla and the forest elephant.

DR Congo has 84 million inhabitants (2018), spread over more than 200 different ethnic groups. The country is thus among the four most populous in Africa and the ten most populous in the world. The four largest ethnic groups are Mongo, Luba, Congo and Mangbetu-azande. These make up a total of 45 per cent of the population.

There are over 200 different languages ​​spoken in DR Congo. French is the official language, while lingala, kikongo, Swahili and tshiluba have the status of national language. Lingala was the official language of the army under President Mobutu Sese Seko, and is the lingua franca among large sections of the population. 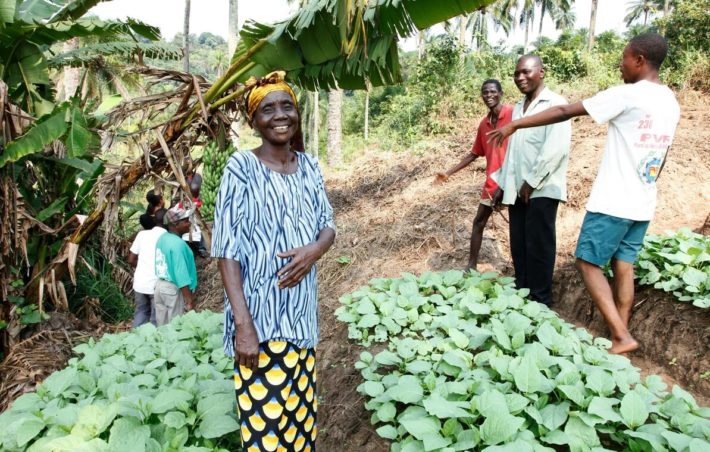 Today’s constitution was passed after a referendum in 2005 and came into force on February 18, 2006. The legislative power lies in parliament, which has two chambers. The lower house is elected directly in referendums, while members of the Senate are elected by provincial assemblies.

The judicial system is largely based on the Belgian judiciary. According to the new constitution, the courts are independent of the other state apparatus, but the judges of the local magistrates’ courts, who first judge, are appointed by the president. There are separate appeals courts for civil and military cases, and ultimately a Supreme Court ( Cour de Cassation), a Constitutional Court and a Supreme Judicial Council, which, among other things, proposes candidates for judicial positions both locally and nationally.

Politics in DR Congo is relatively decentralized. Much of the power lies with local governing powers. The country’s size, weak infrastructure and ethnic diversity have ensured that DR Congo has always had a weak central power. Under the new constitution, the state is divided into 25 provinces, as well as the metropolitan area. The scheme replaced the former division into eleven regions, including the capital.

DR Congo is a member of, among others, the UN and the UN’s special organizations, including the World Bank, and the World Trade Organization, the African Union and the Cotonou Agreement, among others.

Tools have been found to indicate that people have lived in the Congo Basin for at least 80,000 years, but little is known about the first inhabitants of the area. The first Bantu people came from the north in the 400s. By then, there were already San people living in Central Africa and southern Africa.

In the 1400s, people groups in the area around Lake Upemba, in the region today known as Katanga, developed advanced social structures. The extraction of iron and copper and trade produced a financial surplus. This laid the foundations for the growth of the kingdoms of Luba (founded in 1585) and Lunda (from the mid-1600s). Both existed until the end of the 19th century.

On the Atlantic in the west, in the area south of the Congo River, the Kingdom of Congo grew from around 1380. When the first Portuguese arrived in the kingdom in the late 1400s, the capital M’banza-Congo was probably the largest city in sub-Saharan Africa. The Portuguese compared it to the home country of Évora.

The first European to find the Congolese was the Portuguese explorer Diogo Cão during an expedition in 1482–1483. The crew of his ship were empty of drinking water when they discovered a brown stream coming from shore. They followed the stream and found the mouth of the river.

King Leopold 2 of Belgium sent the American journalist Henry Stanley on two expeditions to the Congo, the first lasting from 1874 to 1877, the second from 1879 to 1884. At the Berlin Conference in 1885 the Congo Free State was established, with King Leopold as sole owner. Under the guise of having philanthropic motives, the king began a brutal exploitation of the Congo Free State. It is estimated that around ten million people lost their lives as a result of King Leopold’s rule.

After a series of atrocities in the Congo Free State were revealed, King Leopold had to relinquish control of the colony to the Belgian parliament, and the country was named Belgian Congo. Belgium ruled as a colonial power until the country became independent in 1960 and was renamed the Republic of the Congo.

After the 1960 parliamentary elections, Patrice Lumumba became the country’s first democratically elected prime minister while Joseph Kasavubu became president. On July 11, 1960, the Katanga region detached itself from the rest of the Congo. Lumumba turned to the Soviet Union for support, while Kasavubu wanted Congo to ally with the West. With the help of the CIA, Colonel Mobutu Sese Seko conducted a coup and deposed Lumumba. Mobutu sent the Prime Minister to Katanga where he was killed. A 2001 Belgian investigation concluded that Lumumba was murdered while Belgian officers were present. His body was parted and dissolved in acid.

President Mobutu changed the name of the country to Zaire in 1966, and started a nationalization process he called zairization. During Mobutu, Zaïre evolved into a kleptocracy, with the president and a small group of his relatives robbing most of the country’s values.

In 1996 Laurent-Désiré Kabila started a revolt against Mobutu, with support from neighboring Rwanda. After Kabila’s forces reached the capital of Kinshasa, Mobutu left the country in May 1997. Kabila appointed himself president and changed the name of the country to the Democratic Republic of Congo.

In 1998, a new civil war started in the Congo. This time, too, Rwanda, who had become dissatisfied with Kabila’s government, supported rebel groups fighting against the Congolese government. On January 16, 2001, Kabila was killed by one of her bodyguards. The son Joseph Kabila took over as president.

The war eventually became a battle for the country’s natural resources. A number of other countries were involved in the fighting, including Uganda, Burundi, Angola and Zimbabwe. South Africa’s President Thabo Mbeki brokered the conflict, and in 2003 most foreign forces withdrew. A study by the International Rescue Committee estimates that 5.4 million people died as a result of the war.

Measured in the amount of natural resources, DR Congo is one of the world’s richest countries, yet has one of the world’s lowest gross domestic product, GDP, per capita ($ 562 in 2018). The country has experienced high economic growth since the end of the war, but corruption, poor functioning of the judiciary, lack of transparency and poor infrastructure are slowing growth. In 2012, growth was 7.1 per cent. Much of the economy is informal and is not captured by public statistics.

As of 2016, 77 per cent of the population over the age of 15 can read and write. The country has a school system with six years of primary and six years of upper secondary school. The language of instruction is French. Civil war and armed conflicts have caused many children not to attend school.

DR Congo has statutory freedom of the press, but in reality the media is under the strict control of the authorities. Radio is the most important medium, and the state broadcaster RTNC dominates the television and radio markets. Elima and Courrier d’Afrique are among the biggest newspapers, while Salongo is a popular magazine that comes out every other week.

The many peoples groups make DR Congo rich in traditional arts and crafts. The country is known for, among other things, masks, woodcuts and tapestries. The Académie de Beaux-Arts de Kinshasa is the only institution of higher art education in Central Africa.

DR Congo has several writers who have made their mark internationally. Among the most famous are Pius Ngandu Nkashama (1946–) and Paul Lomami-Tshibamba (1914–1985). The latter was one of the founders of the magazine Salongo, and won an award for the novel Ngando, in the Norwegian Crocodile, at the 1948 colonial fair in Brussels.