Djibouti has very limited economically exploitable natural resources. The desert climate provides poor conditions for agriculture, which accounts for only a small part of economic value creation, even though it employs the majority of the working population. With its location at the entrance to the Red Sea, Djibouti has a strategic position, both security policy and financial. The service sector accounts for most of the economic activity, and the formal part of the economy is to a large extent linked to Djibouti’s port operations and income from goods in transit, especially to and from Ethiopia. The presence of French military forces, and in recent years also troops from other countries, is of great importance to the country’s service industries, and an important source of income. Djibouti has developed a growing financial sector,

Political developments in the Middle East and the Gulf, as well as in the Horn of Africa and in Djibouti itself, have for several periods had a significant negative impact on the country’s economy, including the closure of the Suez Canal (1967-75), the war between Ethiopia and Somalia in the late 1970s. , the war between Eritrea and Ethiopia in the late 1990s, the two allied invasions of Iraq, as well as the civil war in Djibouti in the 1990s.

Agriculture is important because it employs approx. 70% of the working population, but plays a modest role in terms of economic value creation, with the sector (including fisheries) accounting for approx. 4% of GDP. With its warm climate and dry, volcanic landscape, Djibouti is little suited to agriculture; only 3% of the country’s food needs are covered by its own production. A significant part of food imports comes from Ethiopia. About half of the country’s population is nomads, and a significant portion of agriculture is based on nomadic animal husbandry, with goats, sheep and camels. The livestock population has declined during periods of drought. By means of artificial irrigation dates and vegetables are grown. Drilling for water aims to increase the area cultivated. 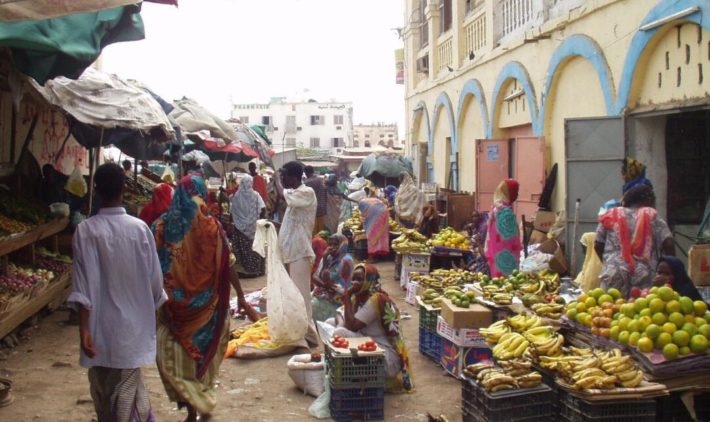 Offshore, there is limited fishing and some pearl diving.

Djibouti is believed to have a number of mineral deposits, which have only been mapped to a limited extent. of gold, silver, copper, lead and zinc. Salt is extracted from several salt lakes, especially Lake Assal, and is a significant export product to Ethiopia.

Industrial development is hampered by a small domestic market, the political turmoil in the region, as well as by relatively high production costs. Industrial production is largely limited to small industries with the production of food, mineral water, mechanical equipment and various craft products. A petroleum refinery was opened in 1990, with support from Saudi Arabia. Since the mid-1980s, efforts have been made to exploit Djibouti’s geothermal potential, with the ambition to make the country self-sufficient in energy.

Djibouti is an important transit country for trade in the region, but has low exports itself, creating a deficit on the trade balance with abroad. Just about all consumables must be imported, including most of the food consumption. Live animals (including camels and cattle), hides and skins are exported. Main trading partners are Ethiopia, Somalia, Yemen and France.

Djibouti, with its international port and railroad, has a central position in trade on the Horn of Africa, and represents a significant contribution to the country’s national economy. The port of Djibouti was made a free port in 1981 and is of particular importance to Ethiopia’s foreign trade. After Eritrea’s independence in 1993, Ethiopia was left without its own access to the sea, and after the war between the two countries in 1998, Ethiopia no longer used the Eritrean ports of Assab and Massawa, but increased the use of Djibouti port, which, due to. greatly increasing volume strengthened its capacity.

From Djibouti, the railway goes to Addis Ababa in Ethiopia, which was taken over jointly by Djibouti and Ethiopia in 1982, from the former Franco-Ethiopian ownership. Well over 100 km of the track at a total of 781 km is located in Djibouti. Increased transit trade to and from Ethiopia has made it necessary – and financially sound – to invest in physically upgrading the track. A large part of the transport also takes the country road to Ethiopia. Djibouti has a road network of approx. 2900 km; only a minor part has fixed cover. The national airline Air Djibouti ceased operations in the late 1980s and was privatized in 1997. In 1985, an undersea telecommunications cable was stretched to Saudi Arabia, and in the late 1990s Djibouti was envisaged as the regional and international transit hub for communications between Africa and Asia.