Equatorial Guinea includes the mainland Mbini (Río Muni), the islands of Bioko (Fernando Póo) and Annobón (Pagalu) as well as some smaller islands. The mainland part of Mbini has an area of ​​26 000 km2. The area consists of a plateau, approx. 600 m., Which falls steeply down toward the coastal plain of vest that covers about 1/3 of the area. The largest river is Mbini (formerly Río Benito).

Bioko (2017 km2) is located in the Gulf of Guinea, approx. 40 km off the coast of Cameroon. The island is of volcanic origin. From a narrow coastal plain it rises steeply towards Pico de Santa Isabel (3008 masl).

In addition, the smaller islands of Corisco, Great Elobey and Little Elobey come off the south coast of Mbini.

Both Mbini and Bioko are located in the tropical rainforest belt, and receive large amounts of rainfall year round. On the mainland, the coastal plain receives between 2400 and 4600 mm of precipitation annually with two peaks a year; the plateau is somewhat drier. At Bioko, the precipitation can exceed 5000 mm annually, with one rainfall peak in the summer. The average temperature is around 26 ° C, the annual temperature variations are small and there is a constant high humidity throughout the year. However, the daily variations are greater; daily maximum is 34 ° C, daily minimum 17 ° C.

Most of the mainland (Mbini) is covered by dense tropical rainforest. There are more than 140 different tree species; the most commercially important are okoumé, mansonia and various mahogany species. At Bioko, the vegetation alternates with the height above the sea, and includes both tropical rainforest, forest water and mountain forests.

Equatorial Guinea includes the mainland Mbini (Río Muni), the islands of Bioko (Fernando Póo) and Annobón (Pagalu) as well as some smaller islands. 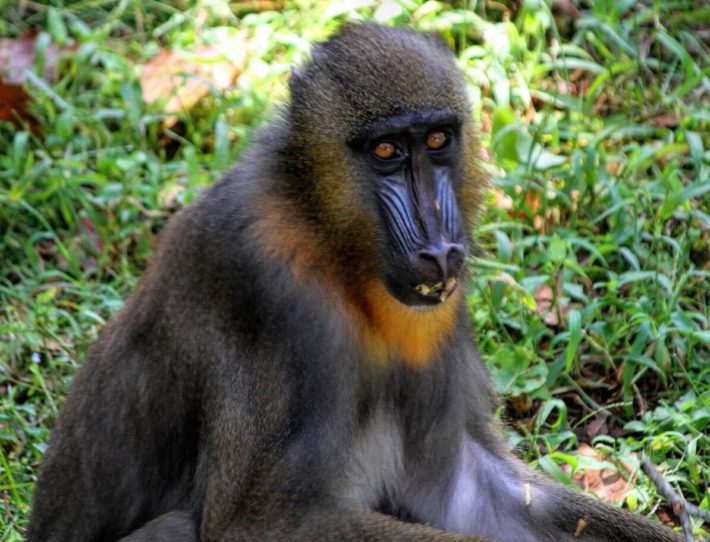 Mbini has a rich wildlife even though distinct savanna species such as lion, zebra, giraffe and wildebeest are missing. The largest animals in the rainforest are forest elephant and red buffalo. Shellfish, brushes and divers (small antelopes) are common. The primates are particularly richly represented: lowland gorillas, chimpanzees, mandrill, manga bees, maracats and half-monkeys. Several of them are endangered species.

Bioko may not exhibit such a rich wildlife, but again there are different monkeys, half apes and a diver.