The first inhabitants of today’s Equatorial Guinea are believed to have been pygmy people, of which only a few isolated groups remain. Archaeological excavations at Bioko have shown settlements from ca. 560; on the mainland, villages from the Iron Age have been identified.

The majority of today’s residents are descendants of bantufolk who immigrated between the 1600s and 1800s, including the the largest of today’s ethnic groups, fang.

The Portuguese Fernão do Po (Fernando Póo) was the first European to explore the coast of today’s Equatorial Guinea and discover the island of Bioko in 1472. The Portuguese were soon followed by British and Dutch slave traders, but the Treaty of Tordesillas of 1474 gave Portugal the right to the area.

In 1778, Portugal renounced the islands of Fernando Póo (Boiko) and Annobón and a stretch of mainland coast to Spain. The purpose was to provide Spain with its own source of slaves for use in Spanish America – Portugal, in return, gained control of parts of today’s Brazil. Spain withdrew from Fernando Póo in 1781.

The British navy used the island as a base in stopping the slave trade in the Gulf of Benin, and in 1827 the United Kingdom took over the administration by agreement with Spain. From 1844 it came again under Spanish sovereignty, and in 1879 Fernando Póo was taken into use as a penal camp for Cubans. On the mainland Spain kept only one area around Cabo San Juan, while France controlled the rest of the mainland area.

The Paris Conference of 1900 set the boundaries of the Spanish colony Río Muni on the mainland, but Spanish authority was not recognized by the dominant prisoners, and effective control was not achieved until the 1920s. After the end of the Spanish Civil War in 1939, an economic development program for the colony began based on cocoa cultivation, with the cultivable land concentrated on Spanish hands.

In 1959, the colony was made an integral part of Spain, where all the inhabitants were also made, technically, to the citizens of Spain, and could elect six representatives to the Spanish parliament. The colony was given some degree of inner self-government in 1963, with its own government and president. 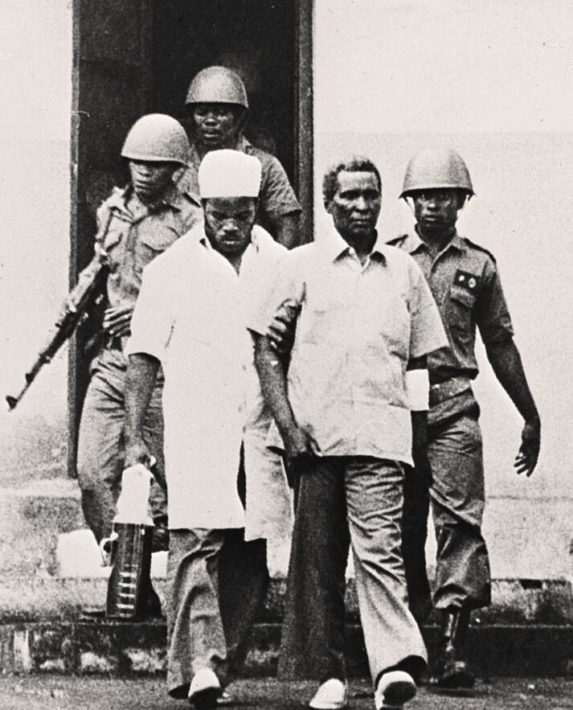 Equatorial Guinea became an independent republic on October 12, 1968, and Francisco Macias Nguema was elected first president. In 1972 he was proclaimed president for life, and Equatorial Guinea evolved into an isolated country with little contact with the outside world. Nguema’s regime was one of the most brutal in Africa, with mass executions, incarceration and torture. Approximately 1 / 3 of the population fled the country. The regime was sustained thanks to assistance from Spain, Cuba, China and the Soviet Union, as well as French commercial activities, while relations with the old colonial power of Spain gradually deteriorated.

In 1979 Macias Nguema was deposed in a coup by his nephew, Colonel Lieutenant Teodoro Obiang Nguema Mbasogo, and the president was executed. Political repression continued, and in 1983 an exile government was formed by oppositionists in Paris. Failed coup attempts were reported in 1981, 1983, 1986, 1988 and 1994. In 1989, Obiang Nguema was elected president without a counter-candidate.

In 1991, democratic reforms were carried out following opposition from the opposition, as well as France and Spain, and more parties than the state-backed Partido Democrático de Guinea Ecuatorial (PDGE) were allowed after a constitutional amendment passed by referendum.

Several parties were formed in exile, but in the new electoral law, candidates must have lived continuously in Equatorial Guinea for the past ten years. This effectively excluded most of the opposition, and the three most important opposition parties therefore boycotted the elections in 1993. PDGE gained a pure majority in the National Assembly, as was the case in 1999, 2004 and 2008. In parallel, Obiang Nguema was re-elected in 1996 and 2002, partly after that the opposition boycott elections, partly after opposition candidates are prevented from voting

In 1997, opposition leader Severo Moto was sentenced to 101 years in absentia for alleged coup attempt, and his party was banned. From his exile in Spain, in 2004, he became involved in a mercenary affair that became the subject of international attention: During a stopover in Harare, a group of mercenaries en route from South Africa were arrested by Zimbabwean authorities. They claimed to be en route to a security mission in Congo, but were suspected of being on their way to Equatorial Guinea to overthrow President Nguema. Those arrested in Zimbabwe were tried and sentenced there, the other interveners were sentenced to up to 34 years in Equatorial Guinea.

After completing his sentence in Zimbabwe, among others, the principal, Simon Mann, was extradited to Equatorial Guinea in 2008, where he acknowledged that a coup was planned to put Nguema out and deploy Moto. Severo Moto was arrested in 2008 by Spanish authorities, suspected of trying to ship weapons to his home country. Also implicated in the affair in 2004 was Sir Mark Thatcher, son of Britain’s former prime minister Margaret Thatcher.

In 1998, three attacks against military targets were carried out in Bioko, allegedly carried out by the Movimiento para la Auto Determination de la Isla de Bioko (MAIB), which was formed in 1993 to fight for independence of Bioko Island – and for its rights. indigenous population, the bubians, who, after independence, had been marginalized by the majority group.

Since then, several organizations, including the UN, have demonstrated, in part, serious violations of human rights. The Norwegian research vessel Fridtjof Nansen was shot down in June 2004, under the auspices of the UN, outside Equatorial Guinea, which led to a protest from the Norwegian authorities.

Obiang Nguema’s regime is accused of widespread corruption, augmented by the discovery of extensive oil and gas deposits in Equatoria-Guinea’s waters. After uncovering widespread abuse of aid, several donors have reduced or suspended development aid, including the UN and the EU. At the same time, the large oil deposits, with prospects for exports of goods and services, as well as oil imports, have contributed to some countries curbing criticism of the regime.

Equatorial Guinea’s foreign policy has been oriented towards the old colonial power of Spain, but from the 1980s increasingly towards France, as Spain has criticized human rights violations. In 1983, Equatorial Guinea became a member of the French-dominated West African Economic Cooperation in the Community Economic and Monetary and African Center (CEMAC), the following year in the Banque de états de l’Afrique centrale (BEAC).

Equatorial Guinea then participated in the Franco-African summits and in 1998 made French the official language alongside Spanish. Relations with neighboring Gabon were poor in the 1980s and 1990s due to extensive equatorial oppositional activity in Gabon, and due to cross-border discrepancies. The conflict intensified in 2003, when Equatorial Guinea reiterated a previous claim that Gabon occupy three small islands (Mbanie, Cocotiers and Congas) in the potentially oil-rich Corisco Bay – and officially claimed it. Equatorial Guinea and Gabon then agreed to leave the dispute to the UN for mediation.

Equatorial Guinea and Gabon agreed in 2004 to cooperate in oil exploration in the disputed waters between the two countries. In 1988, Nigeria threatened to invade Bioko after it became known that technical personnel from South Africa were there. Cooperation with South Africa came at a time when the country was internationally isolated, and Equatorial Guinea became, after 1985, the closest ally of the apartheid regime in Africa.

Cooperation was strengthened following the regime change in South Africa, and Equatorial Guinea has received both South African assistance and investment. Relations with Nigeria improved from 1990, and the two countries agreed to work together to draw up a demarcation line between them in the oil-rich Guinea Bay.

Several borders in the region are disputed, and Equatorial Guinea has taken Nigeria’s side in its border dispute with Cameroon over the Bakassi Peninsula. Relations with the United States were also tense in the 1990s, and the United States closed its embassy in the country in 1996. After the equatorial Guinea oil business accelerated, dominated by US companies, the US opened its embassy again – and also assisted with military assistance.

Equatorial Guinea froze diplomatic relations with Spain in 1997, when Spain did not want to revoke opposition leader Severo Moto’s status as a political refugee. Equatorial Guinea accused Spain of supporting the failed coup attempt in 2004, which was linked to Moto. Relations with Angola and Libya were strengthened only in the 2000s.