Equatorial Guinea is a republic in West Africa. The country consists of the mainland Mbini (formerly Río Muni), the islands of Bioko (formerly Fernando Póo) and Pagalu (formerly Annobón) as well as some smaller islands. The mainland borders adjacent to Cameroon in the north and Gabon in the east and south. Bioko, Pagalu and the small islands are located in the Gulf of Guinea. The capital is Malabo. Equatorial Guinea has become one of the largest oil producers in sub-Saharan Africa, but dictatorship and corruption have led most of the population to live in poverty.

The name is a Portuguese distortion of “Ganuya”, which was a kingdom on the west coast of Africa in the 1400s.

The country consists of one mainland and five islands. The mainland part of Mbini consists of a plateau about 600 meters above sea level with a steep fall in the west towards a coastal plain that makes up about one third of the area. The largest watercourse is Mbini (formerly Río Muni).

Bioko about 40 kilometers off the coast of Cameroon is volcanic. From a narrow coastal plain, the terrain rises steeply towards the island’s and the country’s highest point of Pico de Santa Isabel, 3008 meters above sea level.

Pagalu about 150 kilometers southwest of Bioko is volcanic and wooded.

Off the south coast of Mbini are the smaller islands of Corisco, Elobey Grande and Elobey Chico.

Despite the name Equatorial Guinea, no part of the country lies on the equator.

The country has a tropical rainy climate where every month is warmer than 26 ° C. The annual temperature variations are small and the humidity is high. The coastal plain on the mainland receives 2400-6400 millimeters of rainfall annually, while Bioko’s annual rainfall can exceed 5000 millimeters. There is less rainfall inland. The daily diurnal variations are more significant with the daily maximum of 34 ° C and the daily minimum of 17 ° C. From June to August it is dry in Mbini and wet at Bioko, in December – February it is the other way around.

Most of the country has tropical rainforests with okoumé, mansonia and several mahogany species as the most commercially important tree species. In many places there is a large logging of trees. At the coast, mangrove forest turns into dense rainforest. At Bioko, the vegetation with the height above the sea varies from tropical rainforest to forest water and mountain forests ; In the lowlands there are cocoa plantations and on the slopes coffee plantations.

Bird life is very rich; about 835 species have been detected.

Equatorial Guinea’s reptiles include crocodile and many snakes, including several python snakes.

Insect life is very rich with, for example, tsetse fly and malaria mosquitoes ( anopheles ), which are the cause of many diseases, as well as many species of butterflies, beetles, ants and termites.

67.6 per cent of the population speak the official language Spanish and 32.4 per cent other languages, including fang and bubi (1994). In Mbini, special catches and other tribal languages ​​are spoken, and in Bioko, bubi is the most important language. It also speaks ibo, french and pidgin english. In Pagalu, a Portuguese mixed language is spoken.

Most of the inhabitants are Roman Catholics. Traditional tribal religions are also widespread.

Malnutrition and malaria are very widespread, and the health and health conditions in the country are poor.

Equatorial Guinea is a presidential republic. The president has the executive power, is elected to the general election for seven years and can be re-elected. Legislative authority is the two-chamber Assembly, the 70-member Senate and the 100-member Chamber of Deputies. These are elected in general elections for five years.

The country is divided into seven provinces.

It is selective compulsory military service for men from 18 years. Service time is two years. The country has a small army, air force and navy. There are also paramilitary forces.

Equatorial Guinea is a member of the UN and most of the UN’s special organizations, the African Union and the Cotonou Agreement.

The earliest inhabitants appear to have been pygmies. Archaeological excavations have shown settlement from about 560, and on the mainland, rural communities emerged in the Iron Age. The Portuguese Fernão do Po probably came to Bioko in 1472, and Ruy de Sequeira came to Pagalu between 1472 and 1475, most likely in 1474. From the 1600s to the 1800s immigrated lap Bassin to the mainland (Mbini).

Under the Tordesillas agreement, Portugal was granted exclusive rights in Africa under colonialism, but it was not until 1778 that the country relinquished the islands of Bioko and Pagalu, as well as the mainland between the Ogooué and Niger rivers, to Spain in a barter trade with Spanish territories in Brazil. Thus, Spain became a source of African slaves for transportation to Spanish America. The Spanish population of Bioko became fewer after being affected by yellow fever, and the remaining ones left the island in 1781. Bioko was later sought out by British, Dutch, German and French slave traders. There was no Spanish settlement on the mainland.

Bioko was, by agreement, administered by the British authorities from 1827 to 1844, when the colony once again came under Spanish colonial rule. From 1879 Pagalu was used as a penal camp for Cubans. On the mainland Spain controlled only one area around Cabo San Juan, while France controlled the rest of the mainland.

In 1900, the borders of the Spanish colony on the mainland were set, but the prisoners did not accept them, and it was not until 1926 that Spain gained effective control over the mainland (Río Muni). The colony was called Spanish Guinea until the mid-20th century. The introduction of foreign workers made the colony an important producer of cocoa and timber. After the end of the Spanish Civil War in 1939, an economic development project based on cocoa was started, and the arable land was owned by Spaniards. In 1959, the colony became an integral part of Spain, and in 1963 it gained a degree of inner self-government with its own president and government.

In 1968, the country gained full independence and Francisco Macias Nguema became the country’s first president. In 1972 he became president for life. In the 1970s, the president’s opponents were persecuted through terror, persecution, murder and mass executions. The terrorist regime lasted from 1968 to 1979, during which time a third of the population fled the country. The regime received assistance from Spain, Cuba, the Soviet Union and China, but relations with Spain gradually deteriorated. In 1979 Macias Nguema was deposed in a coup by nephew Teodoro Obiang Nguema Mbasogo. The president was executed. Political repression continued, an exile government was set up in Paris and several failedThe coup was carried out between 1981 and 1994.

Following pressure from the opposition, Spain and France, democratic reforms were introduced in 1991, and several parties were allowed. The main opposition parties were boycotted at the elections in 1993. The situation for the country’s economy has changed since large deposits of oil and gas were discovered in 1996, but dictatorship and corruption are among the factors that have led to the income not benefiting most of the people.. In 1997, diplomatic relations with Spain were frozen, and the same year the government and some of the opposition parties signed a cooperation agreement. Two new coup attempts were unveiled in 2004. The same year, the Norwegian research vessel Fridtjof Nansen was shot under a mission for the UN off the coast of Equatorial Guinea.

Obiang is Africa’s longest-ruling dictator. A new constitution was introduced in 2011, including a Vice-President (two were appointed) and a Senate with 70 members. 55 are elected by the people and 15 are appointed by the president. In 2011, plans for a new capital, Oyala, were announced.

Agriculture accounts for 5.1 per cent of GDP. Coffee is a significant export item in addition to the production of palm oil, bananas, sweet potatoes, cassava, rice, yams and corn. Agriculture, forestry and fishing were reduced after independence, but timber harvesting has recovered. Lumber, coffee and cocoa are the most important export items after oil and gas. About 70 per cent of the working population is employed in agriculture and forestry.

Industry accounts for 85.7 per cent of GDP. Oil and gas extraction on the continental shelf began in 1991 and Equatorial Guinea has become the third largest oil exporter in sub-Saharan Africa. Industry outside the oil sector is mainly limited to the processing and processing of products from agriculture and forestry. The service industries account for 9.2 per cent of GDP. 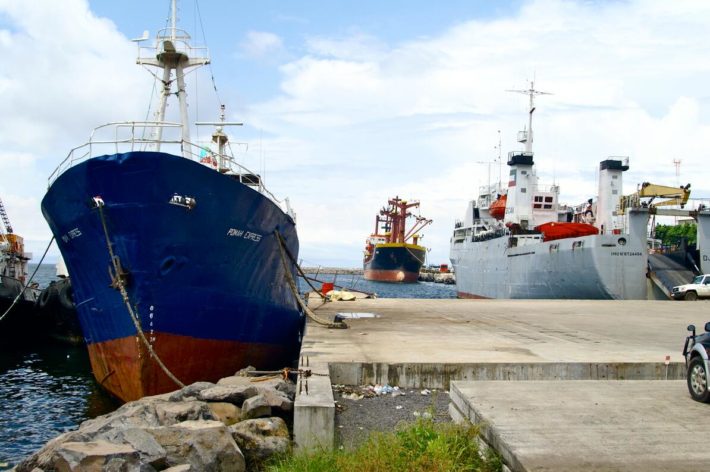 Schooling is free and compulsory for children between 6 and 14 years. The country has a university in Malabo and a medical faculty in Bata.

Sculptures and masks are made. Fang art is known for its abstract character.

Music and dance are central to cultural life. Many of the songs and dances have religious significance. Balélé dancing is performed at Christmas and on holidays, and ibanga, a fang dance, is popular in coastal areas. The female and male dancers cover the body with white powder.