About half of Eritrea’s residents are Christians and half are Muslims. Traditionally, there is a lament between the various religious groups. The constitution guarantees freedom of religion, but in reality it is heavily circumscribed. Both Christian and Muslim groups that are not approved by the state are persecuted and many people are imprisoned for religious reasons.

Four faiths are officially recognized: Sunni Islam and three Christian churches – the Eritrean Oriental Orthodox Church, the Roman Catholic Church and the Eritrean Evangelical Lutheran Church. In practice, the state banned all other religious groups in 2002. Some communities, such as Jehovah’s Witnesses, were outlawed even before.

It is mainly the majority of the tigreans in the Central Highlands who are Christians, but there are also tiger-speaking Eritreans who profess Christianity as do many kunama and blind people. Most Christians belong to the Orthodox Church, which came to the then Aksum kingdom as early as the 300s (see Ancient History). From the 6th century the church was subordinate to the Coptic church in Egypt.

Of the Muslims, the vast majority belong to the Sunni. They are found mainly outside the highlands: along the coast, in the highlands in the north and in the lowlands in the west. The Eritrean Muslims have close ties to Muslims in Sudan and in the Arab world. 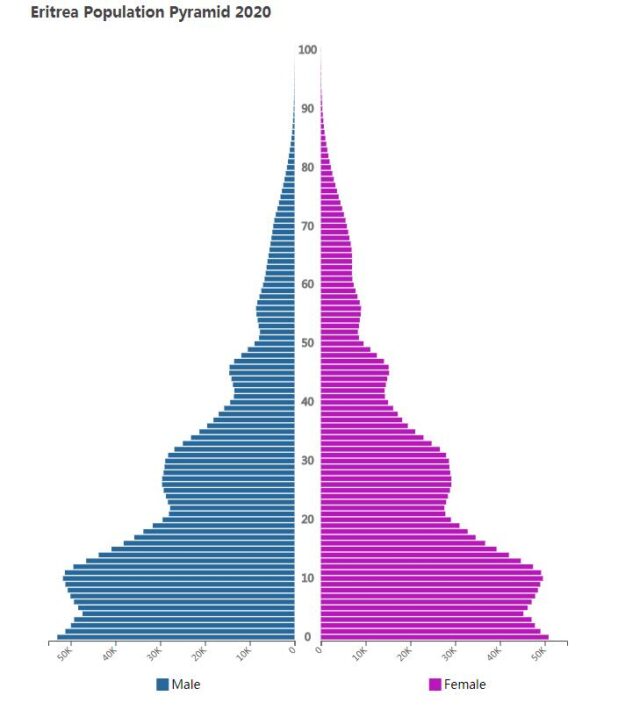 From about 2005, supporters of the recognized religions have also been subjected to arbitrary arrests and abuses by the regime. Both the Mufti of the Muslims and the patriarch of the Orthodox Christians are now appointed by the authorities. The third Patriarch of the Eritrean Orthodox Church, Abune Antonios, was deposed in 2007 after refusing to accept the regime’s involvement in the Church’s business. Replacement Abune Dioskoros was appointed even though he was not ordained and was not recognized by other Coptic/African Orthodox church communities. Since he died in 2015, the place as a patriarch has been vacant.

The state accuses “non-traditional” Christian communities, and “foreign” Muslim groups of engaging in strenuous and socially disruptive missions, which they claim violate cultural traditions. Some small Christian communities are particularly harassed. Jehovah’s Witnesses are imprisoned for refusing to do military service. Systematic persecution and torture are reported, as well as deaths among prisoners.

In June 2019, the authorities took control of all health clinics run by the Catholic Church, which meant that thousands of patients were left without care. In September of that year, the authorities also took over seven middle schools run by Christian or Muslim communities. Among other things, several Catholic schools were affected. Assessors felt the measures were a consequence of the Catholic Church criticizing President Afwerki and calling for political reform.

UN Security Council tightens sanctions on Eritrea following reports that Eritrea continues to support al-Shabaab and other armed groups in Somalia. The resolution requires foreign companies operating in the mining industry in Eritrea to ensure that money from this sector is not used to “destabilize the region”. All members of the Security Council vote in favor of the resolution except China and Russia, which abstained.