Ethiopia is one of the oldest Christian countries in the world. As early as the 300s, Christianity became the official religion of the then Aksum kingdom. Nowadays, Ethiopia lacks state religion, and the proportion of Muslims is estimated to be greater (about 45 percent) than the proportion of residents belonging to the Ethiopian Orthodox Church (around 40 percent). At the same time, the proportion of Protestants has increased.

Ethiopia and after independence 1993 also Eritrea are the only sub-Saharan countries where Christianity is not a colonial heritage. Syrian missionaries brought with them the Christian faith early and King Ezana was converted around 330 (see Ancient History).

From the 6th century the Ethiopian Church was subordinate to the Coptic Church in Egypt. It was not until 1948 that the Christians in Ethiopia decided to choose their patriarch among their own bishops. The Ethiopian Orthodox Church places great importance on the Old Testament and on customs associated with Judaism. Old Testament dietary rules are followed, boys are circumcised on the eighth day after birth and both Saturday and Sunday are rest days.

For Amharas and Tigers, the Orthodox Church has throughout history served as a unifying force. In 1974 it lost its status as a state church and was equated with other communities. Among Christians, the proportion of Protestants has increased rapidly in recent years, not least the Pentecostal movement. The Lutheran Mekane Yesus Church was founded in the 1950s after a mission from, among others, Sweden. 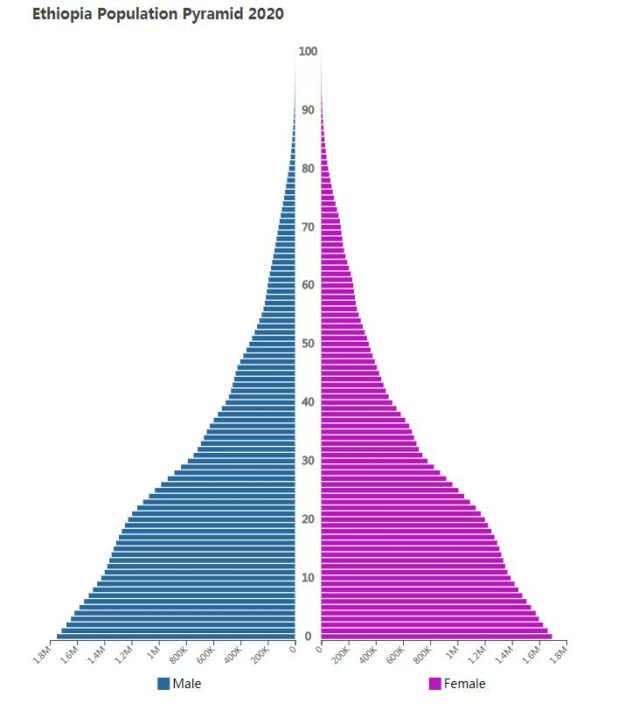 Although Ethiopia is often associated with Christianity, almost every other resident is Muslim. In eastern Ethiopia, especially among Somalis and Afars, Islam dominates. Most are Sunni Muslims.

Historically, Christians and Muslims have lived peacefully side by side for centuries. According to tradition, Prophet Muhammad was sheltered from persecution in Christian Ethiopia, and therefore declared the country protected from Muslim holy war. Freedom of religion prevails according to the constitution and a law from 2008 makes it forbidden to name one religious group against another.

In the 2010s, before the change of government in 2018 (see Current policy), concerns about radical Islamism and the possible presence of Islamic terrorist networks in the country increased. This led to tougher attacks and harassment by the state against Muslims. Some Muslims also accused the government of interfering in religious issues.

In particular, following the Abiy government’s takeover in spring 2018, the contradictions between Muslims and Christians have increased. Prime Minister Abiy, himself a Muslim, was accused in the fall of 2019 by leaders of the Orthodox Church for ignoring the dozens of churches attacked during Abi’s time in power. Both mosques and churches have been vandalized during the period. Religious violence has been particularly noticeable in the northern region of Amhara, where around 80 percent of the population is Christian.

Some smaller groups practice traditional indigenous religions, often with elements of religious belief and ancestral worship. There are also Catholics, Hindus and Sikhs in the country.

A small group of Ethiopian Jews can be found in the city of Gondar in northwestern Ethiopia. Previously, the group was considerably larger, but most have emigrated to Israel since the 1980s. Tens of thousands were evacuated by Israel from starvation and civil war in two major evacuation efforts in 1984 and 1991. Nowadays, around 7,000 Jews remain in Ethiopia.

Ethiopia is central to Rastafarianism, a religious movement that originated in Jamaica in the 1930s and whose followers worship Ethiopia’s former emperor Haile Selassie as a manifestation of God. Rastafari comes from “Ras Tafari”, where breed is a kind of prince title. In Ethiopia there is only a small colony of Rastafarians.

Several human rights groups, including Amnesty International and Human Rights Watch , are calling on the government to put a stop to the security forces’ harsh crackdown on protesters. According to HRW, at least 75 people have been killed during recent weeks’ protests against plans to expand the capital of Addis Ababa into areas that traditionally belong to the Oromo people group (Addis Ababa is located in the Oromia region). Among the concerns, there is concern that agricultural and pasture lands are being seized by the state.

Save The Children warns of starvation disaster

Save the children appeals to the outside world about $ 100 million to help Ethiopia avoid a famine disaster. According to the organization, the country is suffering from its most severe drought in 50 years, partly caused by the weather phenomenon of El Niño. The government estimates that 10.1 million people are threatened by severe food shortages in 2016 and that over half of them are children. The Ethiopian government has allocated $ 192 million for emergency work.

Four bloggers and journalists who have been detained for 18 months are released from charges of terrorism. They were prosecuted for planning attacks in cooperation with the US-based opposition movement Ginbot 7.

The People’s Representatives Council, Parliament’s House of Commons, is electing Prime Minister Hailemariam Desalegn for a second term. He is forming a new government.

The US President is visiting the country

In his visit to Ethiopia, Obama praises the country for its efforts against Somali al-Shabaab, but he adds that the Ethiopian leaders have much to do to learn how to respect fundamental human rights.

A few weeks before US President Barack Obama comes to visit six journalists who have been in prison for more than a year are released. One of them, journalist Reeyot Alemu, was sentenced in 2011 to 14 years in prison, after an appeal reduced to five years. The charges against the other five are closed.

Ethiopia and 25 other countries agree on a new free trade agreement, the Tripartite Free Trade Area, which covers most of Africa from Egypt in the north to South Africa in the south. However, before the agreement can come into force, negotiations are required and the agreement is approved by the parliaments of the countries.

Prime Minister Hailemariam Desalegn, together with Djibouti President Guellehi, will attend a ceremony as the new 75-mile-long railway between the country’s capitals is inaugurated. The railway built with Chinese financing reduces the transport time from two days via the highways to less than ten hours.

Elections are held for Parliament. Prior to the election, Amnesty International, in a critical report, pointed to extensive and systematic abuses against citizens. A large number of members of registered political parties have been arrested, as have journalists, bloggers and government critics. Independent media has been silenced by threats and laws that cut freedom of expression. The Blue Party states that more than half of its candidates have been refused registration.

Land grief after IS executions

Three days of country mourning are announced after at least 30 Ethiopians have been killed by the Islamic State (IS) extremist group in Libya. IS has published a video showing how Ethiopians are accused of being “Christian crusaders” and have their throats cut off on a beach. In Parliament, some MEPs demand that Ethiopia respond with air strikes against the Islamists in Libya, as Egypt had previously done after a similar incident.

Human Rights Watch reports on how systematic persecution of free media has increased since 2010, judging by the aim of silencing all criticism of the regime before the May elections.