The Constitution guarantees religious freedom and is largely respected. Nearly three-quarters of the population is Christian, according to official data. Christianity is strongest in the south, where European influence has been strongest since colonial times.

Most Christians are Protestants, divided into hundreds of different communities. There are also a number of indigenous African churches, which have grown substantially since independence in 1957.

Nearly a fifth of Ghanaians are Muslims, according to a 2000 census. Muslim organizations believe that the proportion in reality is higher. However, Population growth has been higher in the south than in the north, where Islam is strongest. In the cities in the south there are many immigrant Muslims. Most Muslims belong to Islam’s main Sunni.

Especially in northern Ghana, many people cling to traditional indigenous religions with elements of animism (apostasy and ancestral worship). More than one-twentieth of the population is estimated to belong to these religions.

Tensions have occurred between Christians and Muslims, but the religious tolerance is usually great. By contrast, Muslims have slipped after the Christians in social and economic development. This is partly due to the fact that Muslims did not send their children to the Christian mission schools, which have long been a crucial part of education in the country. 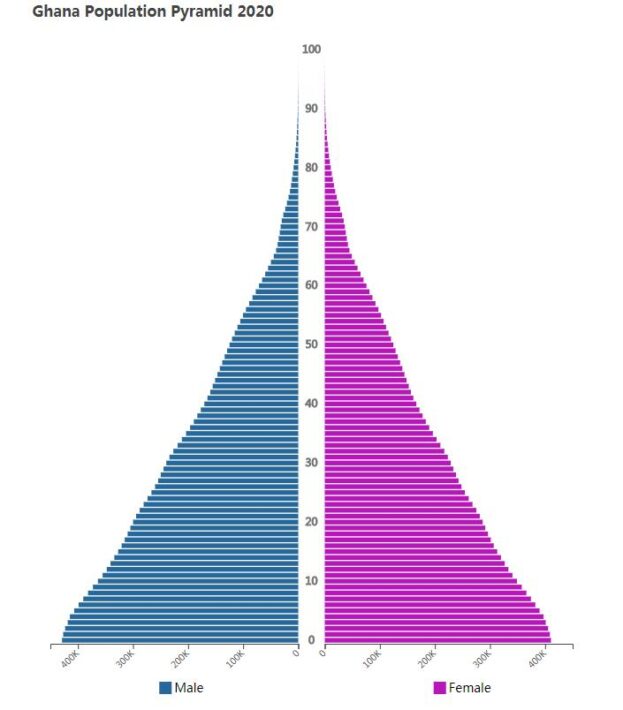 Ghana is a multi-ethnic state. More than fifty ethnic groups live here. The Akan make up the largest group with a share of 52%. They also include the Fanti and Ashanti. The Mosi and the Dagomba in the north make up 16% of the population, the Ewe in the south 12%. About 2 million Ghanaians live abroad.

The official language is English. The Christian religions dominate the country. 20% of the population profess African religions. 16% are Muslim.

The main settlement areas are in the south in the coastal areas and in the Ashanti mountains. Around 36% of the population live in cities. In addition to the capital Accra, there are numerous large cities with more than 100,000 residents, such as Kumasi, Tamale and Tema. The illiteracy rate is around 35% despite compulsory schooling.

A coup attempt is averted

At least three people have been arrested in connection with security forces averting a planned coup attempt, the government announces. According to the Ministry of Information, the target makers of the coup makers were the president. Behind the coup attempt is a group, called TAG (Take Action Ghana), whose goal is to recruit and radicalize young people in order to destabilize the country. Militants must also have been involved. In the assault against TAG, the police must have found small arms, home-made explosives and other chemicals. One of the arrested is reported to be a doctor.

NDC chairman is suspected of kidnapping

Samuel Ofosu-Ampofo, chairman of the country’s largest opposition party NDC, is arrested in connection with the police investigation of a series of kidnappings. Among other things, two Canadian relief workers, an Indian man and an Estonian consul, have been kidnapped. Ofosu-Ampofo, who has previously been both a prime minister and a member of parliament, is released on bail pending further investigation into the suspicions of the crime against him. Abductions and violent crimes against foreign nationals are relatively uncommon in Ghana.

Around 80 are arrested for separatism

Police arrest 81 people (including two women) suspected of supporting the planned declaration of independence for Western Togoland (see Calendar 5 May 2019). All arrested are reported to be members of the Foundation for the Homeland Study Group (HGSF), which works for a free Western Togoland. As a result, 89 people have been arrested for separatism in just a few days.

Eight men are arrested in the city of Ho, 15 miles northeast of Accra, suspected of leading a campaign for the proclamation of the independent state of “Western Togoland” in eastern Ghana. The police must have seized the constitution of the planned state and national anthem from the men. According to the police, the arrested belong to a group called the Homeland Study Group Foundation (HGSF) and must also have trained a militia force. HGSF was formed in 1994. Among the arrested are group leader Charles Kormi Kudjordji, 85 years. He is released on bail because of his high age.

John Mahama is running for the 2020 presidential election

John Mahama, who was Ghana’s president between 2012 and 2016, is elected to the opposition party NDC’s candidate in the 2020 presidential election.