The coasts of Guinea began to be known by Europeans only in the mid-fourteenth century, thanks to the Portuguese navigators, or others, however always in the service of Portugal. According to Abbreviationfinder, an acronym site which also features history of Guinea, the first explorer to arrive in the area was Tristao Nunez in 1446 in that part which was then French Guinea. Then came Alvaro Fernandes and Diogo Gomes. But the first more exact news came when Alvise Cadamosto, Venetian navigator, in 1456 discovered the Cape Verde Islands and the coast which then became Portuguese Guinea.

But the recognition of the Guinean coast continued by many other famous explorers including Diogo Cao, Mungo Park and the American Stanley, who then went inland and arrived at the great rivers: Volta, Niger, Ogouè and Congo. These explorers were the main architects of compiling the geographical maps of Africa that have come down to us.

At the beginning this, which is one of the most picturesque areas of Africa, was called “Rivieres du Sud” (Rivers of the South). In 1634 the French cardinal Richelieu commissioned the Cape Verde Company for exploration, assigning it privileges. Other privileges were given by Louis XIV, the Sun King, to the Senegal-Guinea Company and still others in the 18th century to other Companies for the subsequent completion of the exploration.

But the real stable conquest of the colony occurred in the second half of the nineteenth century, during the period of the II Empire, when General Faidherbe studied a penetration project in the area which was then implemented parallel to that of Senegal, through military missions and struggles bloody, which eventually rewarded the preponderance of French forces.

At the time of the Third French Republic, the military work begun by General Faidherbe was completed with the annihilation of the rebel forces, led by the barbarian leader and slaver Sampry, who until then had brought scrolls throughout Eastern Guinea.

In 1890 the French founded the city of Konakry, on the island of Tumbo, connected to the mainland with an artificial casting.
In 1904 he ceded the Los islands to France and, therefore, they too became part of French Guinea.

The colonization was intense and did not stop even with the passage of the two world wars. In 1920, many completely reclaimed territories allowed vast cultivations of rice and bananas, with exports at special rates applied to France. From 1947 to 1957 all exports tripled. In 1952 the port of Konakry assumed a lot of importance because iron exports started from there.

In 1956 the African Socialist Movement, led by Lamine Gueye, arose in Konakry, the capital. The Movement’s program was aimed at obtaining the revision of the 1946 Constitution. In particular, it asked for: 1) an Association of France and the overseas territories, in which there were equal rights and duties for all citizens; 2) – a territorial government, responsible before an Assembly endowed with legislative powers.

The elections of March 31, 1957 were won by the Democratic Party of Guinea, formed under the direction of Sekou Tourè, who, together with L. Senghor, President of Senegal, took charge of requesting a Federation of the eight territories of French West Africa, with an executive in Dakar, united in the Confederation with France.

When, in 1958, President C. De Gaulle proposed the formation of a Franco-African community, Tourè called a popular referendum for September 28 and, with the favorable result acquired, on October 2, rejecting the proposal of De Gaulle, he proclaimed the ‘independence. France threatened the withdrawal not only of officials but also of all financial subsidies; despite this, 40 states recognized the free state of Guinea.

On the following 23 November Tourè took the first political step by signing a union agreement with Ghana as the first nucleus of the United States of West Africa. And with this agreement, Ghana immediately provided ten million pounds to Guinea and all the technical and administrative assistance that had become necessary.

In January 1959 the Paris government returned to its decisions and started negotiations with Konakry. In the meantime, Tourè made several trips from October to December 1959: to Great Britain, Czechoslovakia, the Federal Republic of Germany, the Soviet Union and Morocco to enter into commercial agreements in order to overcome the difficulties of the first phase of settling.

The communist countries, in particular the Soviet Union, provided aid to the young republic of Guinea, which went from the French franc to the Guinean franc. But between 1962 and 1964 relations with the Soviet Union were interrupted, with the expulsion of Ambassador Solod, guilty of having been involved in a strike against the government. Instead, collaboration with popular China was strengthened. In 1963 all slopes were settled with France, with which relations were broken two years later. In the same year, the United States took over financial aid to Guinea.

After De Gaulle’s death, contacts were resumed with France and with other African Francophone states. In 1970 Guinea suffered a military attack from abroad, which caused serious damage to government structures and freed many Portuguese soldiers from prisons. For this the Lisbon government was accused of the attack, so a wave of arrests, with death sentences and life sentences, hit the country.

In 1972 Sekou Tourè ordered the release of a part of the detainees, renewed the Party structures of which he remained Secretary General; he offered aid to Portuguese Guinea in his struggle for liberation¸ he performed acts of relaxation and friendship with the other states of West Africa with which the following year he came into conflict by reopening old controversies.

In 1975 Tourè was confirmed for the third seven-year term as president of the republic and the following year he signed the Lomè Convention and restored relations with France.

Tourè, after having wanted at all costs to build a socialist state, had to acknowledge the company’s failure. And then in 1978 he started a wide liberalization of the economy. In the 11th Congress of the “Democratic Party of Guinea” he declared socialism formally abandoned; he approached France and the moderate French-speaking African countries; he solemnized reconciliation with France by welcoming French President Giscard d’Estaing in Konakry in December 1978 and returning the visit to Paris in 1982. Tourè also visited many countries in Africa and the Middle East, offering himself a mediator in inter-African conflicts.

Struck by a heart attack he died on March 26, 1984 in a hospital in Cleveland, Ohio, during an operation. And on April 3, while the succession was being organized, the military, with a coup, deposed the president “interim” Lansana Beavogui and assumed power by proclaiming the Second Republic.

The two military leaders: Colonel Lansana Contè and Colonel Diarra Traorè became President of the Republic and Head of Government respectively. They immediately joined the International Monetary Fund and granted a wider liberalization of the system.

In December 1984 Traore was deposed and on 4 July 1985 he attempted a coup that failed, and in December of the same year more civilians than military entered the government. Elections were held in April 1986 to bring the government to civilians and on a democratic basis.

In December 1990 the new Constitution was promulgated and with it ended the one-party government. In January 1992, Lansana Contè was forced to resign following repeated protests by the opposition that had long called for the separation of legislative and executive powers, and the convening of a national conference of all the political forces in the country. But it was also the blatant discrimination that fueled the ethnicity of the “Sussu” that fueled the dissensions. In fact, the most prestigious state and military assignments had always been reserved to this one, which was the one to which Contè belonged. 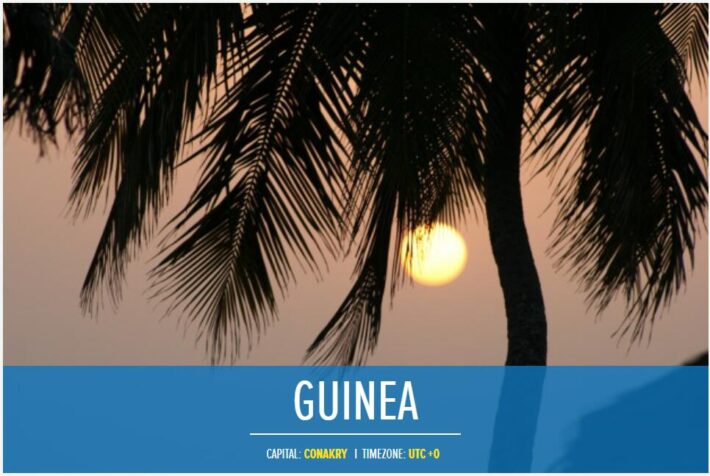 To try to quell tensions, the government then anticipated some political reforms and multiparty was immediately applied in the presidential elections of December 1993. The main parties that had formed in the meantime were: the “Party of Unity and Progress”, of military origin. which belonged to Contè, and those of opposition “Guinea People’s Union”, “Union for the New Republic” and “Party for Renewal and Progress”.

Contè’s party prevailed and, consequently, he was re-elected. The subsequent elections of January 1995 confirmed that party’s dominance. All this kept politics in a precarious state so that in 1996 another military coup had to be foiled. Contè then decided to entrust the two highest government offices to two civilians: in 1996 a Prime Minister was appointed; in 1997 an Interior Minister was appointed.

In September 1998 two opposition parties unified to form the Union for Progress and Renewal, and this brought its own candidate, M. Bath, to the presidential elections, who was defeated by Contè, still confirmed president.
For foreign policy, Guinea maintained ever closer economic and military relations with France.