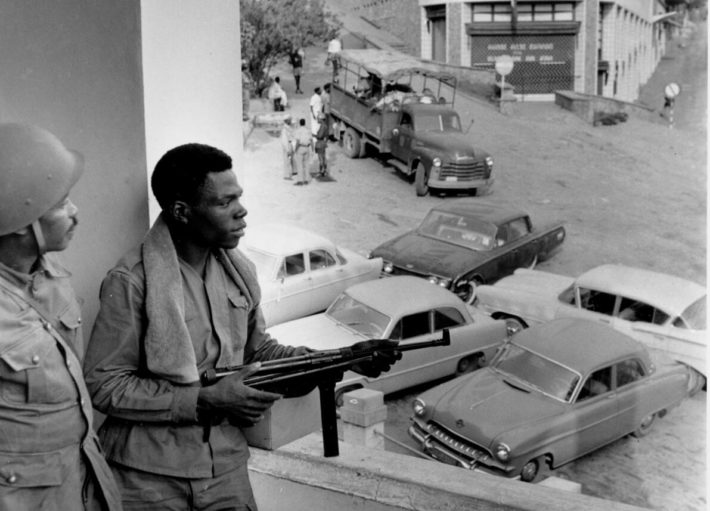 A Congolese soldier is guarding cars left by Belgian owners who left Congo when the country became independent from the colonial power in 1960.

Trade and mission opened the Congo to Europeans without directly colonizing it. Journalist and discoverer Henry Morton Stanley, who in 1877 followed the Congo River from the east to the outlet in the west, was one of those eager for Britain to take control of the area. Britain was not interested, but France established itself on the north side of the river in what became Congo (Brazzaville). This spurred Belgium’s King Leopold 2 in his efforts to procure his land a colony, but neither were the Belgian authorities interested. This led to Leopold, including with the support of Stanley, who the King engaged for new missions in Africa, even set out to establish a colony in the Congo. After a political game in which he expressed his interest as a humanitarian, he received support from Germany and the United States, among others, and secured control of the Congo during the Berlin Conference in 1884-1885. From 1879 the king set up a number of trading stations along the Congo River, and his intention was always to make the greatest profit possible from the engagement in Africa.

The prerequisite for the great powers’ support for his colonial advance was that Congo should be a free trade area, and the colony was established as the Free State of Congo (État Indépendant du Congo) in 1885. Equally, Leopold succeeds in establishing a trading monopoly in Congo, where Belgian companies – where the king himself was the dominant owner – received a license for trade, as well as for mineral extraction. In order for the Congo to earn the king the largest possible profit in the shortest possible time, a ruthless government was set up in the lives of colonial officials who worked largely for private companies, but ultimately under the control of the king. A prerequisite for profitable utilization of resources was the construction of a railway, which was carried out with the help of forced labor, and the establishment of shipping traffic on the Congo River. Particularly intense were the yields from the 1890s, when demand for raw rubber increased sharply and before plantations could supply the market with this product to a greater extent.

Systematic use of forced labor was used both to collect wild rubber and to provide carriers for transport. The use of violence, especially whipping, was very widespread, and murder was also common. Prisoners were taken and villages destroyed to force chiefs to provide the necessary number of carriers; hands were cut off to scare the forced laborers into doing their utmost. Central to the control of the colony was military power, from 1888 organized as the king’s colonial army in the Force Publique. It consisted of African soldiers, but was led by European officers and deployed both to cushion the population and to defeat the colonists. The resistance was considerable from several peoples, and in parts of the country there was guerrilla war against the colonial power, partly over several years.

One argument King Leopold used to get support in Europe and the United States about his colonial project was that he would fight the slave trade run from Zanzibar; in the late 1800s led by the best known of them, Tippu Tip. Slave traders from there controlled large parts of eastern and southeastern Congo, and in 1892–1893 the Free State went to war against them to regain control. The use of slave labor and violence was known in Europe, including through revelations from missionaries and civil rights defenders, but was not abolished; those in Congo were rarely held accountable. Dividends in the Free State of Congo are among the best-documented examples of the most serious forms of exploitation in colonial history, but also occurred in other colonies, including in neighboring French Congo.