Congo was the personal property of Belgian King Leopold II, and large parts of the country were licensed to large companies. 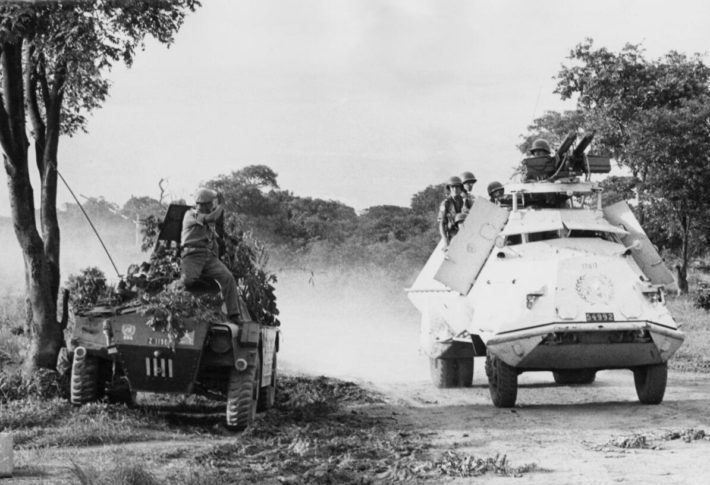 Swedish UN soldiers advance in Katanga, southern Congo, during the crisis that occurred after the country gained independence in 1961.

International protests led the Belgian state to take over responsibility for the territory, and Congo became a Belgian colony by parliament annexing the country in 1908 as Belgian Congo. By then King Leopold had made sure that the Free State archives were destroyed, to erase most traces. Some of the worst abuses ceased after the Belgian state took over, but the economic activity was still based on forced labor. As in other colonies, one way was to force the local people to work for the colonial rulers to impose taxes – which meant they had to take paid work or produce goods that Europeans would pay for. Accordingly, the exploitation continued under Belgian rule, and mineralsgradually replaced rubber as the main export product. It is estimated that the Congo population was halved as a result of the brutal colonial rule in the years around 1900, and that around ten million people died as a direct result of this.

King Leopold’s Congo was largely ruled from Brussels by a private colony administration. A large part of this was occupied by personnel recruited from several European countries, including around 1500 from Scandinavia. Also 200–300 Norwegians served there, many of them sailors and officers. These acted as ship officers and officers in Force Publique or the mining companies’ security forces, respectively. Norwegians were also involved, directly or indirectly, in the abuses that took place in the colony. The Belgian consul in Norway, the industrial leader Christian Thams, participated in the recruitment from Scandinavia. Norwegian missionaries have served in the Congo from around 1920; Baptists in the North, Pentecostals in the East.

Belgium ruled its Congo colony with an extensive degree of paternalism – and separated whites and blacks in a segregated system based on race. The Belgians themselves believed that they developed a model colony with the establishment of their own suburbs for blacks, with health and schooling – the latter right probably to a considerable extent driven by missionaries. Like the Portuguese in their colonies, the Belgians were not receptive to the idea of ​​independence for the colonies. They were, therefore, against developing an African middle class or educated elite who would demand independence. While the primary school was well developed, few further education programs were available. By independence, there were therefore only 17 Congolese with a university degree. Belgians occupied most positions in public administration. The lack of Congolese people withhigher education, and gaining experience from higher positions in modern administration, contributed to the major problems Congo faced with independence, and which the country has been characterized by ever since. Political and regional contradictions that emerged under Belgian rule have also persisted, and foreign interests have helped to keep them equal.

As one of Africa’s most mineral-rich states, Congo has attracted foreign mining interests from the colonial period to the present, and these have significantly contributed to conflicts and wars in the country; both in the civil war immediately after independence and in the civil war which in the second half of the 1990s developed into a regional war. The presence of several strategic minerals such as copper, cobalt and uranium contributed to the West supporting a dictatorial regime in the 1970s and 1980s. The great natural riches were the main reason King Leopold secured control of the Congo, and why Belgium did not want to give the colony independence.

Unlike France and the United Kingdom, Belgium was not prepared to facilitate future independence; Like Portugal, Belgium envisaged holding on to the territory. As in the large Portuguese colonies of Angola and Mozambique, a large number of Europeans had settled in the Congo, and to a large extent dominated public administration and occupied leading positions in the private sector. Only in the 1950s was political organization allowed. The Alliance des Bakongo (ABAKO) was founded in 1950 as a cultural organization, to strengthen the language of the Bakong language and culture. Under the leadership of Joseph Kasavubu, it was turned into a political party in 1954.

In 1958, the more radical Mouvement National Congolais (MNC) was formed by Patrice Lumumba. The MNC advocated for a unified Congolese state after independence and advocated pan-Africanism. Other groups, such as the Rassemblement Katangais, wanted local autonomy for the different regions within a federation. Belgium had envisaged a protracted process before Congo gained autonomy, but nationalists pushed for speed, and in 1957 Belgium began preparing for the transition to independence, including through local elections. Riot in Kinshasain January 1959 demanded a number of human lives and helped to accelerate independence; Immediately after the violence, for the first time, Belgium recognized independence as the ultimate goal. A conference to discuss independence was held in Belgium in 1960, where the Belgians gave in to the demands of the nationalists. In the subsequent elections in May, to the surprise of the Belgians, the MNC became the largest party, with a majority in Congo’s first national assembly.