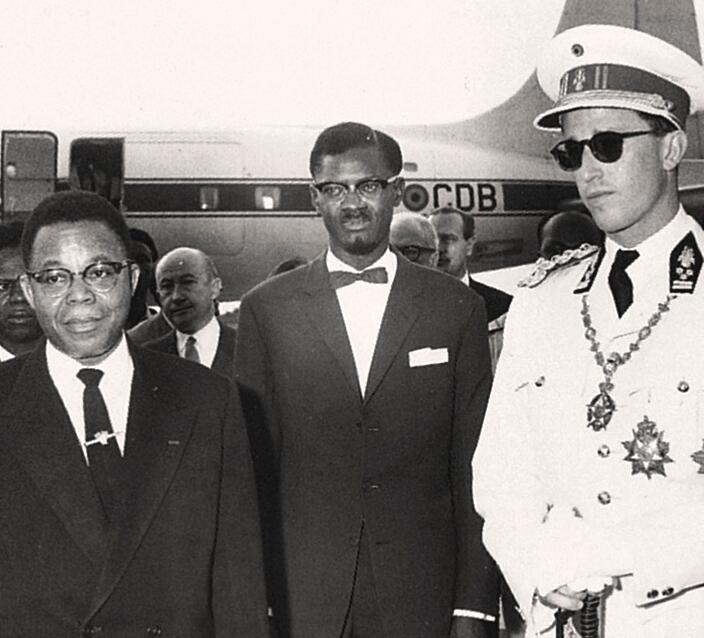 In connection with the solemnity of the transition from colonial rule to independence on June 30, 1960, King Baudouin 1 of Belgium came to Léopoldville (Kinshasa). Here he was welcomed at the airport by Congo’s first President Joseph Kasavubu (left) and the country’s first Prime Minister Patrice Lumumba (center).

After General Mobutu conducted a coup in the fall of 1960, arrested Prime Minister Lumumba and handed him over to the rebel Moise Tshombe in Katanga (where he was assassinated), Mobutu was formally appointed commander of the armed forces by President Kasavubu in January 1961. From 1965 until he was toppled in May 1997, Mobutu was president of the Congo, which he renamed in Zaire in 1971. In the photo from 1961, Kasavubu stands in the middle and Mobutu on the left.

Congo became independent on June 30, 1960, ruled by a coalition government with Lumumba as prime minister and Kasavubu as president. The army was still led by Belgian officers, and mutiny broke out in the armed forces. Belgium immediately sent troops to strike down the rebellion; officially to protect Belgian citizens. The majority of the European population fled the country in panic. Protected by Belgian soldiers, Moïse Tshombe declared Katanga’s independence on July 11, 1960, with himself as head of state. This happened in agreement with Belgium, South Africa and the United States, and with the support of the mining companies, who had great interests in the province’s mineral wealth.

In August, the province of Kasaï also broke out and declared its independence, but this rebellion was turned down. The demolition of Katanga weakened Lumumba’s strategy for a united Congo, and the prime minister brought the crisis to the United Nations, which sent a peacekeeping force, the Opération des Nations Unies au Congo (ONUC) in 1960–1964, with, among other things, Norwegian participation. With ONUC in place, the Belgian forces were eventually sent home. The UN operation became one of the most comprehensive and demanding ever, and the UN force was involved in direct combat operations, including some of the many mercenaries fighting on both sides. The conflict took place at the height of the Cold War, and Lumumba received support from the Soviet Unionafter the United States would not assist him in securing Congo’s unity. The conflict was first and foremost a struggle between those who wanted real independence for the Congo, represented especially by Lumumba, and those who wanted a neo-colonial solution, such as Moïse Tshombe – where the West still controlled the raw materials. As a result, Belgium and the United States, among others, opposed Lumumba, who was considered a dangerous demagogue and portrayed as a Communist.

President Kasavubu deposed Prime Minister Lumumba as a result of dealing with the Katanga crisis, but the National Assembly refused to approve the provision. It supported Lumumba, who then deposed the president. In this political crisis, the military power seized on September 14, 1960, under the command of the colonelJoseph-Désiré Mobutu. All political activity was suspended and Mobutu set up a commission to govern the country. At the same time, some of Lumumba’s ministers formed a new government led by Antoine Gizenga in Stanleyville (Kisangani) and claimed to be the only legal. Lumumba was arrested and beaten several times until he was murdered on January 17, 1961. The killing was carried out in Katanga on the basis of Mobutu’s decision and Tshombe’s order; by Katangan soldiers and Belgian police officers in Katanga’s service. Then the US intelligence agency had the CIAlong planned to kill the prime minister. The body of Lumumba and two other nationalists who were killed with him were parched and dissolved in acid to erase all traces. It was only in 2002 that Belgium acknowledged its involvement in the killing and assumed a moral responsibility for the murder of the elected Congolese prime minister.

The killing at Lumumba was a setback for both Congolese nationalism and continental pan-Africanism, and the political development in Congo after his death consisted of decades of internal strife, civil war and foreign military interference. Lumumba’s supporters were persecuted and several revolts against Mobutu and Kasavubu fought; several thousand were killed in the first half of the 1960s. In 1966, Lumumba was proclaimed a national hero, while Mobutu started its national authentication policy. In 1961, UN Secretary General Dag Hammarskjöld died when his plane crashed over Northern Rhodesiawhile traveling in an attempt to mediate in the conflict. Lumumba’s political goal of uniting the vast land, much of which is inaccessible, into a unified state was not achieved. The absence of a strong central government, a clear policy and a democratic tradition from the first time after independence has been a major cause of Congo’s major problems since. Another cause is the country’s wealth, which has led to widespread corruption and foreign interference.

Congo Parliament met again in 1961 and appointed a new government led by Cyrille Adoula, still with Kasavubu as president – and with Mobutu as the strong man. At two conferences in 1961, it was decided to establish a confederation of Congolese states, without this being implemented. Under pressure from the central government, Tshombe expressed his willingness to give up Katanga’s independence, but did not give up his position until he left in exile in 1963, when Katanga also ceased as a state. The following year, Tshombe was invited to form a unifying government, and faced military opposition to the government in several parts of the country. In 1964, he summoned Belgian forces in support of fighting the uprising led by the Marxist Conseil National de Libération (CNL), the so-called Simba; established in 1963 by, among others, later President Laurent-Désiré Kabila. The government also engaged a large number of foreign mercenaries. The rebels were supported by countries such as Algeria and Egypt, which provided weapons and advisers. Ugandan troops entered eastern Congo to support the rebels. This scenario repeated far and wide three decades later, during the next civil war in Congo – when the uprising in the east led to Uganda, among others,intervened, and the authorities hired mercenaries to strengthen a weak government army.

A new election in 1965 was won by the Tshombe Convention National Congolaise (CONACO). The opposition gathered in the Front Démocratique Congolais (FDC). Supported by the FDC, President Kasavubu went against the majority in parliament and appointed Évariste Kimba as prime minister. This determined parliamentary situation ended with the military, led by General Mobutu, seizing power in November 1965. Insurgency in the Kwilu, Kivu and Katanga regions was defeated. Rebellion in Kisangani in 1966 and 1967 was initiated by followers of Tshombe, who in 1967 were sentenced to death in absentia for treason. After the coup, Mobutu himself took over as head of state and soon banned all party political activities. In 1967, he formed his own state party,Movement Popular Revolution (MPR). A new constitution from 1967 gave the president executive power. In Kivu and Katanga there were new revolts. An Angola force entered Katanga in 1967 in an attempt to reinstate Tshombe. One of CNL’s rebel leaders, Pierre Mulele, was executed in 1968. Tshombe died of natural causes in 1969.