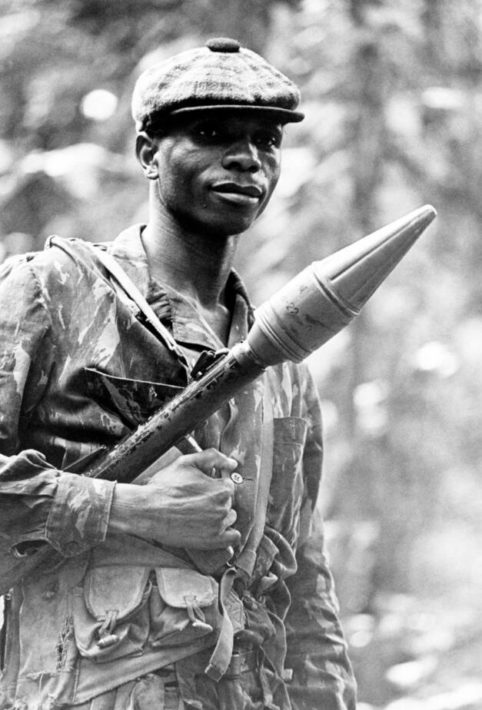 Various liberation movements fought against government forces in the Portuguese-dominated areas of Africa in the 1960s and 1970s. The fight in Mozambique was led by FRELIMO, who succeeded in bringing independence to the country in 1975.

The oldest signs of people in Mozambique are 100,000 years old. In 2007, stone tools were found that show that humans were eating wild sorghum at that time. These are the oldest traces of the use of grain found.

The Khoisan people have lived in the area that is today Mozambique for thousands of years. Sometime between the year 0 and 500 immigrant bantu from the north. Unlike the Khoisan people, who were hunters and gatherers, the bantu farms. The coast of Mozambique was a meeting place between African Bantu people and Arab and Persian traders for more than a thousand years. During the following centuries, Swahili, Persian and Arab businessmen established trading stations along the coast. The Arabs also brought Islam. The Arab historian al-Masudi described African Muslims in Sofa (today called Sofala) as early as 947.

At the beginning of the 15th century, the kingdom of Mutapa arose, which extended over a large area between the Zambezi and Limpopo rivers and covered parts of what is today Zimbabwe, Mozambique, Swaziland and South Africa. The king of Mutapa had the title of mwenemutapa (the prince of the conquered land). Mutapa had gold mines, which European powers showed great interest in.

The Portuguese explorer Vasco da Gama was in 1498 the first European to come to the area, and Mozambique later became a Portuguese colony. The name Mozambique is probably a Portuguese rewrite of Ali Musa Mbiki, an Arab sultan who ruled parts of the area when the Portuguese arrived. The national anthem is Pátria Amada (Beloved Fatherland).

At the same time, an extensive slave trade began. The slaves were mainly sent to plantations in the French islands of Mauritius and Reunion. Towards the end of the 19th century, Portugal handed over much of the administration of Mozambique to private companies, such as the Mozambique Company and the Zambezi Company, many of them controlled by the British. From the 1900s, the immigration of Portuguese to Mozambique accelerated, making Mozambique a settler colony of settlements throughout the territory of today. At the beginning of the century, the Portuguese state fought the last resistance of the African kingdoms inland and introduced a series of laws and regulations such as the memory of the apartheid system. 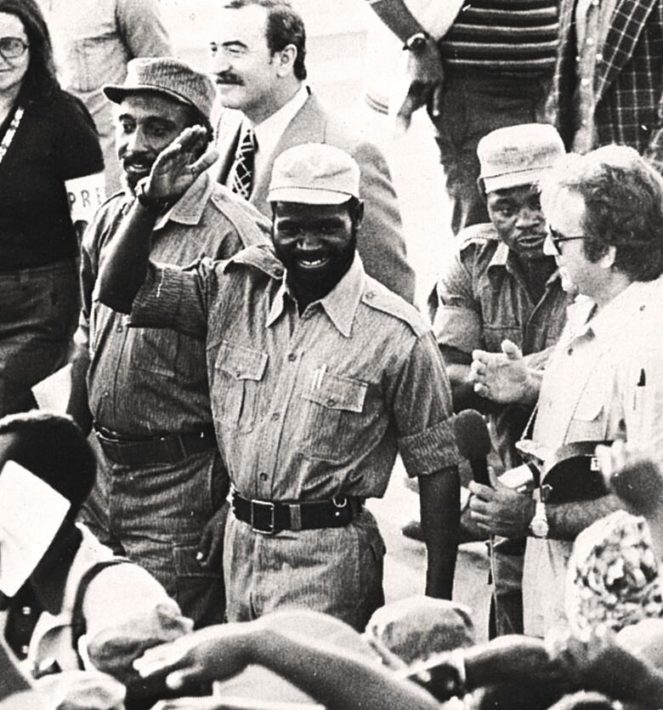 On June 25, 1975, Mozambique became independent under the leadership of FRELIMOS. In the photo, President Samora Machel, leader of the 1966 guerrilla forces, beckons to the people on Independence Day. To his left is Vice President Marcelino dos Santos.

In 1951, Mozambique gained the status of overseas province in Portugal. The citizens – after a lengthy civilization process – would become full citizens. In practice, the majority of Africans were excluded from participating in the modern economy. They lacked education and few could be Portuguese. Although there was no officially discriminatory apartheid policy, as it was in Rhodesia and South Africa, the natives were often seen as underdeveloped.

In 1964, Frelimo started a guerrilla war for independence. Portugal, then a dictatorship ruled by António de Oliveira Salazar, held its African colonies longer than other European countries, but after a coup in Portugal in 1974, Frelimo took control of Mozambique. The following year, the country became independent. The vast majority of the approximately 250,000 Portuguese left the country.

Immediately after independence, Mozambique was thrown into a civil war between Frelimo and the anti-communist Resistência Nacional Moçambicana (“Mozambique’s National Resistance Movement”, RENAMO), which was supported by Rhodesia and South Africa.

On October 19, 1986, the plane crashed on President Samora Machel in South Africa, en route from Zambia to Mozambique. Joaquim Chissano took over as president. He continued the economic reforms that Machel had initiated and negotiated a peace agreement with RENAMO. In 1992, the civil war officially ended with a peace treaty between the parties. From the 1990s, the country was characterized by Frelimo’s continued dominance in state and society, but also by the economic and political power of a large number of foreign aid organizations. 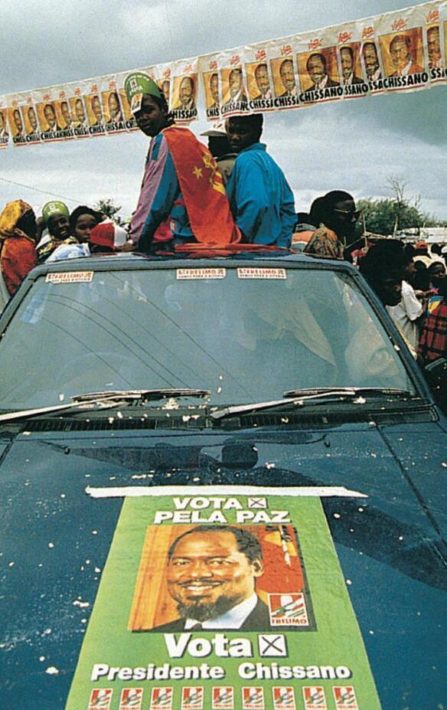 During the October 1994 election campaign and the subsequent multi-party elections, Mozambique’s voters were given the opportunity to participate for the first time. The photo shows FRELIMO supporters with pictures of President Joaquim Chissano, who was re-elected as the country’s president.