The area that is today the Central African Republic was populated by humans early on, but the population was relatively isolated from the outside world until the 17th century. From the early 1800s, Arab traders established contact in the area, and slave trade increased from the mid-1800s. France annexed the area in the 1880s, and in 1891 it became a French colony. In 1946, the colony became an overseas territory of the French Union, and in 1958, the colony gained the status of an independent republic within the French community. The Central African Republic became independent in 1960. The country’s modern history has been characterized by violence and a number of coups. 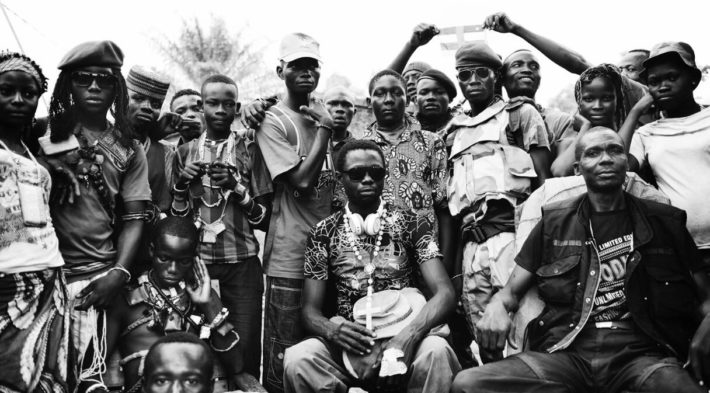 The tool finds evidence of human existence in the area from at least 8000 years back. The country’s original population is babinga, a people who lived in the southern part of what is today the Central African Republic. From around the year 1000 BCE. there was an immigration of other people groups, and there are indications of social formation around 2500 years ago. Up until the 1400s, the various ethnic groups that are present in the country moved in.

Until the 17th century, the area was relatively isolated from the outside world, neither covered by the successful Islamization nor the European and Arab trade that took place in much of Africa.

From the early 1800s, Arab traders established contact in the area, and slave trade increased from the mid-1800s. Also, several African states were involved in the slave trade, which led to depopulation especially in the eastern part of the country, and contributed to the establishment of strong state formation in this area than elsewhere in Africa. One of the most prominent states was Zande; an area that was geographically divided between France and Belgium’s King Leopold when colonial borders were drawn up.

It was not until the end of the 19th century that colonial power France became interested in this inner part of Africa, after the coast was colonized. Savorgnan de Brazza, who secured the Congo for France, sent expeditions up the Ubangi River to expand the French sphere of interest, eventually linking French Congo with French possessions in western, northern and eastern Africa.

During three military expeditions, more and more parts of the area were subject to French control. In 1889 a station was established at Bangui, the future capital, and from 1891 the territory became French colony. In 1899, the boundaries of other colonies in the region were established, and the later Central African Republic was cut off from extending eastward toward the Nile – thus affecting its economically disadvantageous geographical boundaries.

In 1911, parts of the country were surrendered to Germany and incorporated into the German colony of Cameroon, in a political barter where France gained free hands in Morocco. The area was taken back during the First World War. France had little direct control of – or investment in – the country, where large areas were leased to commercial companies, which in practice received large authorizations. As in neighboring Belgian Congo, and French Congo further south, forced labor was introduced, including for the collection of rubber, ivory and leather, as well as work on European plantations.

The plantations used forced labor for the cultivation of cotton and coffee, as well as food for the French staff and soldiers. As in the Congo and the Belgian Congo, brutal punishment methods were applied to the local population, not least by the private companies.

The conquest met with great local resistance, but in 1912 the country was incorporated into French Equatorial Africa as Oubangui-Shari. France launched several military operations in the early 1900s to defeat resistance. The so-called Congo-Wara uprising (1928–31) was the most extensive of a number of uprisings. It was also knocked down, the leaders executed and people forced into villages where the colonial power could oversee them. Some economic development, with the construction of roads and other infrastructure, as well as the introduction of new agricultural growth, took place after the First World War.

After the collapse of the rubber market around 1920, cotton became the most important export product. At the same time, forced labor continued, including for the construction of the railway in Congo. Central African men were enlisted in the war service for France during World War II, which contributed to increased national consciousness. With the new French legislation after the war, Barthélemy Boganda became the first Central African elected to the French National Assembly. In 1949 he formed the country’s first party, the Mouvement d’evolution Social de l’Afrique noire (MESAN), which won the first general elections in the country in 1957.

Barthélemy Boganda became prime minister when the country gained internal autonomy within the French Commonwealth in 1958. He died in an airplane accident the following year, and David Dacko became the country’s first president at independence in 1960. Dacko’s foremost rival, Abel Goumba, was arrested and in 1962 MESAN was made the country’s only permitted party and Dacko was elected president without a counter candidate in 1963.

On New Year’s Eve 1966, the commander of the army, Colonel Jean Bédel Bokassa, came to power in a military coup. Bokassa governed unanimously and in 1972 proclaimed president for life. In 1977, he was crowned emperor during a grand and costly ceremony that garnered international attention. The country changed its name to the Central African Empire at the same time. Bokassa became known for its despotic regime. Comprehensive demonstrations against the emperor took place in 1979, beaten down with the help of Zaire forces.

During 1979, there was a constant clash between protesters and police, and an opposition gathered in exile in a front against Bokassa. In September 1979, Bokassa was toppled in a coup supported by France and the republic reinstated with former President Dacko as president.

A new constitution with multi-party government was passed in 1981, and free presidential elections were held. Dacko won in front of Ange-Félix Patassé. The same year, after pressure from France, Dacko transferred power to a military government, led by General André Kolingba. Kolingba was elected president for six years in a 1986 referendum and mandated to form a new party as the country’s only allowed; Racial Assembly Democratique Centrafricain (RDC). Resistance to the military regime was great, and in 1984 several opposition leaders established an exile government in Libya.

Following French press negotiations between the parties in 1991-1992, the democratization process led to a constitutional change in 1992 that paved the way for multi-party government. In the 1993 presidential election, Ange-Félix Patassé won, re-elected in 1999. He was deposed in a coup in 2003 and the man who then seized power, François Bozizé, was elected president in 2005. The 1993 parliamentary election was won by Patassés Mouvement pour la libération du peuple centrafricain (MLPC) ; at the 1998 elections, RDC became the largest party. The election in 2005 was won by the coalition group Convergence Nationale.