In the second half of the 1990s, political turmoil led to international military intervention. The riots were mainly revolts from parts of the armed forces, which had not been paid their salaries. This also applied to other groups of public servants, with extensive strikes as a result. A group of opposition parties were behind demonstrations in the capital Bangui in 1996. Subsequently, parts of the army revolted and demanded payment of payroll. The rebellion died down, among other things after French troops were deployed to protect the presidential palace, but a new army riot broke out and French troops deployed again before the army rebelled. 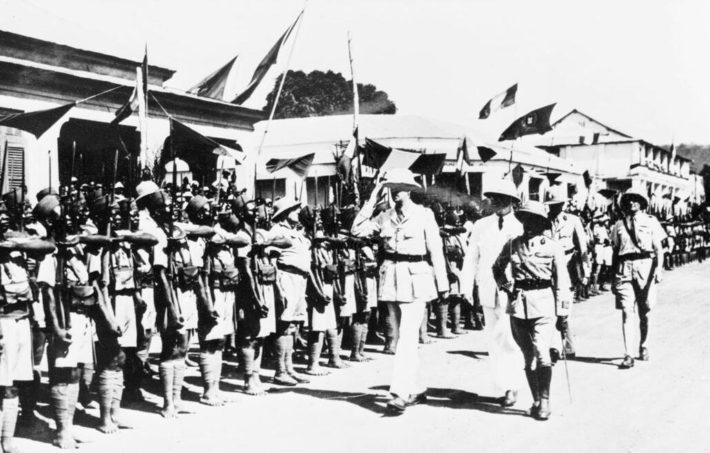 In December 1996, several African heads of state brokered a ceasefire, which was monitored by a Mali brigade. Following new clashes, the so-called Bangui Agreement was signed in 1997. This laid the groundwork for political reforms, the establishment of a national unity government and a multinational African peace force, Mission Interafricaine de Surveillance des Accords de Bangui (MISAB) – deployed with around 700 soldiers.

There were several clashes between MISAB and rebels, and French forces were again deployed in 1997, following attacks on the French embassy. In 1998, the UN Security Council decided to establish a peacekeeping force to replace MISAB; Mission des Nations unions en République centafricaine (MINURCA), consisting of up to 1300 soldiers. In particular, the force would restore security in Bangui, but also assist in the holding of new elections. MINURCA was withdrawn in 2000 and replaced by a new UN office in the country; The Bureau des Nations unions en Centrafrique (BONUCA) – a civilian instrument with military personnel only as advisors – to support the government’s work for peace and national reunification, democratic development and economic reconstruction.

After a failed coup attempt in 2002, General François Bozizé fled to Chad, from where he initiated a new action. Although President Patassé received support from Congolese and Libyan soldiers, he could not prevent Bozizé from seizing power in 2003. The general established a government with broad political participation, and he was himself elected president in 2005.

Following the coup attempt in 2002, the economic cooperation organization Communauté économique et Monétaire de l’Afrique centrale (CEMAC) deployed a smaller peace force, the Force Multinationale en Centrafrique (FOMUC). This was, among other things, mandated to contribute to the security of the country in general and the president in particular, as well as to national reconciliation. The force remained until it was replaced in 2008 by the Mission de consolidation de la paix en Centrafrique (Micopax), issued by the Communuté Economique des etats d’Afrique centrale (CEEAC), with 395 soldiers and 170 police officials from five countries.