After several years of lack of stability, another new dimension of conflict emerged from 2006. At that time, riots broke out in the north of the country related to the conflicts in neighboring countries Sudan and Chad. The rebels, who claimed to fight corruption and ethnic discrimination, took control of several cities in the north in the second half of 2006. Under a defense agreement, France intensified its support for the government, and French forces fought with the rebels at Birao; French fighter aircraft then attacked rebel bases in the north. French forces were also involved in clashes with rebels in 2007.

The conflict in the Central African Republic has both a national and a regional dimension; a local in the north, an international in the east. Initially behind the uprising in the north were supporters of the ousted president, Ange-Félix Patassé, through the Union des forces democratiques pour le rassemblement (UFDR), in a fight to regain power. The conflict is further linked to the conflict in neighboring countries Sudan (Darfur) and Chad, and the Central African government accused Sudan and Tjsad of supporting the rebels, including the Front démocratique du peuple centrafricain (FDPC). At the same time, several groups have been active, even in parts of the country that are not adjacent to Sudan or Chad. 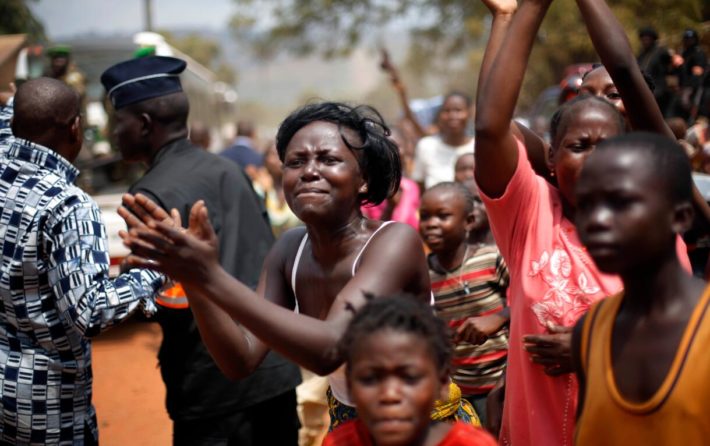 Next to the UFDR is the largest Army populaire pour la restoration de la Republique et la Democracy (APRD), operating northwest of the country, consisting essentially of personnel from Patassé’s former presidential guard. While the UFDR argues that they are fighting for the marginalized northeast, APRD does not have the same political roots. In addition to more organized militia, there was increasing activity from armed bandits, so-called zaraguina, from 2007, which is notorious for kidnapping women and children and demanding ransom – especially from nomadic people in the north and northwest. Several human rights organizations have pointed out that all parties to the conflict are responsible for serious abuses against the civilian population. Since 2005, about 300,000 people have been displaced from their homes as a result of the violence, many as refugees to neighboring Chad.

In 2006, the government also requested the UN to send troops, and this was accomplished in 2007, following an escalation of the conflict in both the Central African Republic and the region – with fear of further regional escalation. In August, President Bozizé made an official visit to Khartoum and signed a peace agreement with Sudan, which assured that the country had no intention of destabilizing the neighboring country, after which the border between the two countries reopened.

In September, the UN Security Council decided to send a multidimensional peace force to both Central African Republic and Chad, consisting of both a UN force and an EU force. The former, Mission des Nations Unies au Chad et a République centrafricaine (MINURCAT), headquartered in Abéché, Chad and a liaison office in Bangui, was originally established with a force of 50 officers and 300 police officers, deployed in the fall of 2007.

The Council of Europe, with the authorization of the UN, decided to establish EUFOR Chad / CAR with 3700 soldiers, including 2100 from France, deployed for one year from early 2008. EUFOR supported the UN force and was to secure an area along the Chad border, Central African Republic and Sudan, including contributing to the protection of civilians as well as humanitarian efforts. In the autumn of 2008, the UN Security Council decided to extend the force with a military component, then MINURCAT from March 2009 took over the security mission after EUFOR, which was withdrawn. MINURCAT’s mandate ended at the end of 2010, when the force was withdrawn. Like the Chad authorities, the government of the Central African Republic expressed reluctance to deploy an international military force in the country.

Peace agreements between the government and the rebel groups FDPC and UFDR 2007 did not stop the use of violence. New peace treaty was supplemented in 2008 by an amnesty law passed by parliament. This laid the foundation for a political congress in December, with the decision to form a broadly composed government and hold elections in 2010. Former President Patassé returned after five years of exile to take part in the peace talks.

In July 2008, the conflict in the Central African Republic took on another dimension as soldiers from the Ugandan militia group Lord’s Resistance Army (LRA) attacked a village south of the country from bases in Congo, fearing that another front would open. In 2008, Congolese militia leader and politician Jean-Pierre Bemba was arrested in Belgium, to stand before the International Court of The Hague (ICC) – accused of assault when he and his soldiers in 2002–2003 assisted President Patassé rebellion. In 2007, the ICC decided to investigate possible war crimes committed in the Central African Republic in 2002–2003, following the failed coup against Patassé.

Due to many years of lack of political stability, the Central African Republic is regarded as a failed state, where the authorities have little control – and to a very limited extent, the ability to offer citizens basic services, including personal security.