Almost all Libyans are Sunni Muslims. Some groups within the Berber minority in the north-west belong to ibadi, a small branch of Islam that is neither Sunni nor Shia and otherwise mainly found in Oman. In the past, there were also small Jewish and Christian minorities, but basically all of them left the country during the Gaddafi holiday. Virtually all who profess a religion other than Islam are of foreign origin.

According to the temporary constitution that was adopted after the 2011 uprising, Islam is state religion and should form the basis of the legislation, while non-Muslims should have the right to practice their religion. In recent years, militant Islamists have, among other things, subjected Christian Copts from Egypt to massacres and destroyed Sufic sanctuaries which they consider pagan to Islam.

Sufi brotherhood in Islam has played a major role in the country’s history, especially the so-called Senussi order. It was founded in Mecca in 1837 by Algerian Sidi Mohammed bin Ali al-Senussi and received its first lodge in the eastern Cyrenaika region in 1843. The task of the order was to revive classical Islam and strengthen the unity of Muslims against the growing European influence. Senussi played a leading role in the fight against Italy, especially in eastern Libya around al-Bayda and Benghazi. At that time, the leader of the Order, Idris, was appointed Libya’s first king by independence.

Libya is a conservative and tradition-bound country, where Islam and politics have always been closely intertwined.

After Muammar Gaddafi’s takeover of power in 1969, many Christian churches were closed down or rebuilt into mosques. The new regime was determined to allow Islam to characterize the entire society, even though religious freedom was formally prevalent. In time, Gaddafi came to make an increasingly personal interpretation of Islam, which rejected the traditional Islamic law schools. Among other things, he stuck to the social message of Islam and introduced several new arrangements, such as restrictions that made polygamy more difficult. 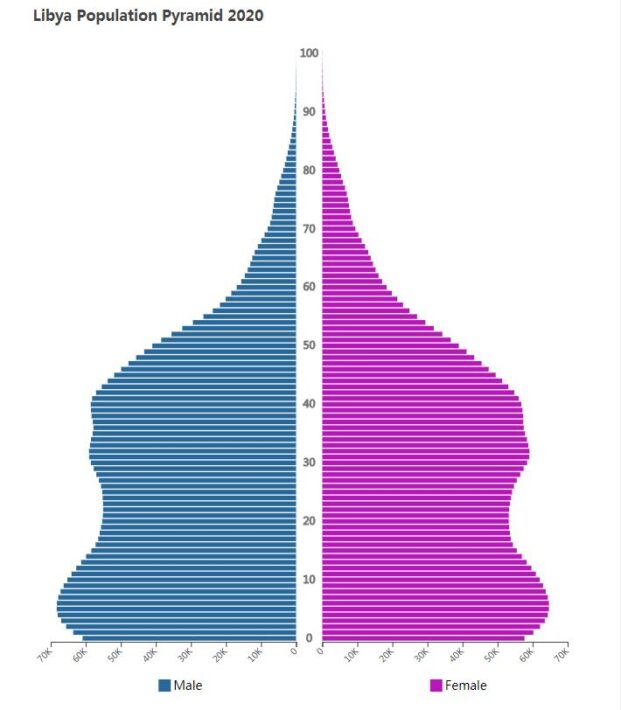 This led to conflicts with conservative groups. In the 1990s, militant Islamist groups launched an armed uprising against Gaddafi in mainly eastern Libya, which was defeated by brutal methods. Gaddafi eventually made some concessions to the country’s conservative opinion and, from the 1990s, allowed the traditional values ​​to characterize the country to a greater extent.

Islamist groups played a significant role in the uprising in 2011. They enjoyed strong support, especially in conservative eastern Libya, and were organized unlike other resistance groups.

In the fragmented political situation that has arisen in the years following the uprising, the picture is more fragmented. But religion is not a major dividing line, the disagreement is more about power struggles and who should have the right to be included in future government formation. From 2014, the International Islamic Terrorist Organization Islamic State (IS) has also gained a foothold in Libya, although the group has subsequently been pushed back.

Both where IS governs and elsewhere, strict interpretations of Islam’s rules have increased space and, among other things, has meant that women’s right to move outdoors without male companionship is limited.

The new UN envoy Kobler calls the agreement signed in Skhirat (al-Sakhirat) in Morocco historically. But it is not the leaders of the rival parliaments who sign without other representatives, and no other armed groups are involved. The agreement nevertheless sets the point for more than a year of negotiations under the UN mediation.

Around a third of Benghazi schools re-open, after being closed for a year and a half.

IS leaders allegedly killed in US air strike

The US Department of Defense states that US combat air strikes on November 13 attacked a facility in Darna and likely killed IS Libya leader Abu Nabil.

León is accused of conflicts of interest

The Tripoli government faces charges against the outgoing UN envoy when it turns out he goes straight to a well-paid job in Abu Dhabi. The United Arab Emirates supports the government in Tobruk.

UN envoy León says the parties have agreed on a unifying government. But he is immediately bribed by members of both rival parliaments, who say they do not support the proposal.

Parliament is voting to extend its mandate after October 20 when it really expires, in order to avoid “a vacuum” in the country.

According to the UN, 1.2 million Libyans suffer from food shortages and 435,000 have been forced to flee their homes. At the same time, 250,000 migrants from other countries are estimated to be in the country, en route to Europe.

A court sentenced Saif al-Islam Gaddafi and eight others to death in a mass trial against 37 people who have been held since April 2014. Most others are sentenced to prison, some on life. Saif al-Islam Gaddafi is still held by the al-Zintan militia, which is loyal to the internationally recognized government. However, the others are in the Tripoli government’s repository. The UN Commissioner for Human Rights voices sharp criticism of the judicial process.

IS is being driven out of Darna

Local Islamist fighters and civilians in the area are driving IS, which is suffering its first clear setback in Libya.

At least 14 are killed and about 50 injured in fighting in Benghazi, between a militia group and forces loyal to the internationally recognized government.

Dozens of IS members are said to have been killed during a day’s fighting in the city, where a local militia is trying to drive IS away. Later this month, more than 20 soldiers are reported to have been killed in fighting with Islamists, in an attempt by the government army to advance against the Islamist-controlled Darna.

Tripoli calls for “mobilization” against IS

The call will then kill five members of Libya’s dawn in a suicide attack in northwestern Libya, which IS says is behind it.

Struggles between IS and Libya’s dawn

Hard battles are fought south of Sirte. IS claims to have taken over the city’s airport, and taken control of the irrigation project “the large artificial river” (see Agriculture and Fisheries).

Five journalists who worked for a local broadcaster are found dead eight months after they were abducted. A day later, the government states that five detainees have acknowledged the murders of the five and of two other Tunisian journalists whose bodies have not been found.

UN envoy León states that a draft has been reached during the negotiations in Morocco and that it is “very close” to a definitive agreement.

Omar al-Hassi, who was deposed by the Tripoli government in March, hands over to First Deputy Prime Minister Khalifa al-Ghawail.

UN resolution against IS

The Security Council unanimously adopts a resolution on increased efforts against IS in Libya, however, without raising the arms embargo on the country that has existed since 2011.

Representatives of the two rival governments meet for the first time directly, under the mediation of Bernardino León, in Morocco.

The decision by the Tobruk government is controversial: Haftar was Gaddafi’s chief of staff until 1987, when he was captured in fighting against Chad. Since his release in the early 1990s, he lived in the United States. He is said to have had close ties to the CIA and spent two decades trying to overthrow Gaddafi. Detainees returned to Libya in connection with the 2011 uprising.

This is the first time the jihadist group has taken control of an entire city outside Iraq and Syria. This is partly done by local jihadists belonging to Ansar al-Sharia declaring themselves loyal IS.

At least 40 people are killed and dozens injured in what appear to be three concerted assaults in al-Qubbah near Darna, at a gas station, a police station and a parliamentarian’s home. IS supporters say they have avenged Egypt’s air strikes.

Egypt is bombing IS scaffolding

Only a few hours after the video publication, Egypt launches air strikes. Libya’s Air Force chief states that at least 50 people are killed.

IS publishes a video recording showing how 21 abducted Christian cups were beheaded on a beach. They were guest workers who were kidnapped in Sirte around New Year.

Parliament in Tobruk abolishes the law that banned those who had government services during Gaddafi’s time in power from participating in politics (see May 2013).

IS attack in Tripoli

At least twelve people, including five foreign nationals, are killed when a hotel in Tripoli is stormed by armed men who are reported to belong to an IS-affiliated group.

Libya dawn announces ceasefire and announces opening of passage for humanitarian aid. Two days later, the government-controlled army also calls for a ceasefire, with the reservation that it is still intended to chase “terrorists”.

The suspected al-Qaeda leader (see October 2013) dies in the New York detention center, just days before the trial against him would begin. al-Libi, who turned 50 years old, is said to have suffered from liver cancer.