Since 1994, basic education has been free in Malawi. Most children of school age begin their education, but the dropout rate is large. The country’s foremost places of education are the universities of Lilongwe, Zomba in the south of the country and Mzuzu in the north.

Despite far-reaching poverty, Malawi has a rich cultural heritage. This applies to building custom, way of life and storytelling traditions with singing, dancing and clothing. Some cultural expressions were suppressed during the dictatorship from 1964 to 1993, but today they are again part of a popular culture. During the dictatorship, many of the country’s intellectuals and writers traveled in exile. Since then, the situation has improved, but in recent years, human rights in Malawi have again had increasingly tight conditions. This has been reflected in the lack of freedom of expression and in more difficult working conditions for journalists. The change of government in April 2012 provided temporary improvements in these areas. In the fall of 2016, the Center for the Development of people (Cedep) twice directed a request to the UN High Commissioner for Human Rights and asked the High Commissioner to monitor developments in the country more actively. 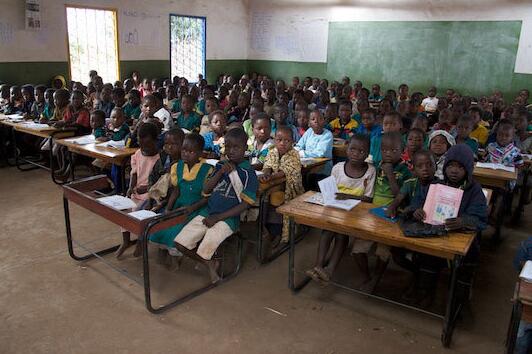 There are often many students in each class. The picture was taken at an elementary school outside the capital Lilongwe.

Malawi has a new young literary environment, with an active writers’ association and several local publishers. A central figure in the country’s literary life was the author Steve Chimombo (1945–2015).

The music ranges from traditional music to modern western oriented beats. Increasingly, the country’s radio stations have been playing foreign music, and in response to this, in 2016 Parliament passed a law imposing on radio stations that 70 percent of the music they transmit must be of local origin. At the same time, hopes were expressed that Malawian musicians and singers are being paid royalties.

Theater tradition is important in Malawi, and even during the dictatorship, sensitive questions were raised and given an artistic form at the theaters.

The country’s two leading daily newspapers are The Nation and The Daily Times, both English-speaking. In addition, several smaller newspapers, many of them in Chichewa or other local languages, are published. Malawian TV, which broadcasts in both English and Chichewa, is to a considerable extent government-controlled.

Cultural and historical connections link the traditions of the different peoples to neighboring countries as well as to each other. Music and dance are traditionally associated with religious and social rites. In both traditional religions and syncretist churches, song dance is practiced as part of healing rituals.

Kalimba (thumb piano ), mambirira, mangolongondo and ulimba (xylophone types) are found in various forms and have roots in traditional local culture, while zeze (citrus type) and mngoli (single-string fella) have probably been spread along caravan and trade routes from the coast.

New forms of music and dance have been developed in the 20th century. after the influence of British military parades, Christian mission and school as a result of widespread commuting to neighboring countries. Newer urban forms are influenced by pan-African and Western pop music.