Mali is named after the Mali kingdom, which flourished between about 1250 and 1450, and was one of the world’s largest states in the 1300s. By occupation and internal dissolution, the Mali kingdom was reduced in extent and importance.

In the 19th century, French military and economic influence became evident, and in 1895 the colony of French Sudan was established. It covered the territory that the nation-state of Mali today covers. At independence, Mali and Senegal joined forces in the Mali Federation in 1960, but after collapsing after two months, the Republic of Mali was proclaimed September 22 of that year. In the 1960s, Mali pursued a strong socialist policy and cooperated with the Soviet Union and China.

In 1968, a group of officers did a coup that brought Moussa Traoré to power. In the 1970s and 1980s, Mali was severely affected by the drought disaster in the Sahel area. After a rebellion in 1991, Traoré was deposed in a military coup and multi-party government and democracy established. A new constitution was passed and the country’s first free elections were held in 1992.

In January 2012, a riot broke out among Tuaregans belonging to the MNLA (National Movement for the Liberation of Azawad). They fought for an independent state in northern Mali, Azawad. Since the beginning of the 2000s, Islamist groups from Algeria had also entered Northern Mali. These groups eventually built up by taking Western hostages for which they were paid ransom. In addition, they have been involved in smuggling cocaine and cigarettes through the Sahara into Europe. Islamist groups such as AQIM, Ansar Eddin and MUJAO have partly competed and partly collaborated. In 2012, the Islamists quickly placed the secular Tuareg rebels on the sidelines and introduced a strict interpretation of Sharia law. This led to hundreds of thousands of Malaysians fleeing to Bamako and Mali’s neighboring countries.

Captain Amadou Haya Sanogo in the Malian army led a coup d’etat and removed President Amadou Toumani Touré from power on March 22, 2012. The coup was motivated by great dissatisfaction in the army with how the president has handled the crisis in the north of the country. Sanogo handed over the presidential power to the head of the National Assembly after 20 days of state of emergency. During this chaotic period, the rebels declared northern Mali as an independent state, Azawad, (April 6, 2012). But Azawad has never been recognized by any other state.

At the turn of the year 2012-2013, the rebels moved south towards the capital Bamako. French forces intervened, under UN Security Council Resolution 2085, to stop them before they reached the capital. A total of 4,000 French soldiers were sent to Mali in this operation, called the Opération Serval. Afterwards, 6,000 African soldiers from ECOWAS and Chad also participated in the operation. In April 2013, the UN took over responsibility for the peacekeeping operation in Mali, MINUSMA. On June 18, 2013, some of the parties, but not the Islamists, signed a ceasefire agreement that also included the promise of a new presidential election. The presidential elections were held in July and August and Ibrahim Boubacar Keita won clearly in the second round and was inducted as Mali’s President on September 4, 2013.

The Islamist groups AQIM and MUJAO were temporarily weakened and withdrew to the north in Mali as a result of the strong presence in the country from the UN peacekeeping force MINUSMA. However, they continued with kidnappings, road robberies and killings in the areas around and north of Kidal town. Throughout 2014, occasional but fierce fighting took place between the rebels and the government. Both groups took several French nationals hostage throughout the year.

While the Islamist invasion south was militarily fought back in 2013, the Islamists began to return to the central Mopti region from 2015. But this time they did not come as an invading army. Instead, they have gradually and in smaller groups taken control of villages in the region, so that in 2017, all of central Mali is controlled by Islamist militant groups, while the army and the state have control over the cities only. Many in the countryside have joined the Islamists, because they are pretending to hire the state’s government and corruption. At the same time, Islamists have marketed themselves as a movement that is against corruption and the privileges of the state elite. It is therefore more economic and political than religious reasons why many join these groups. 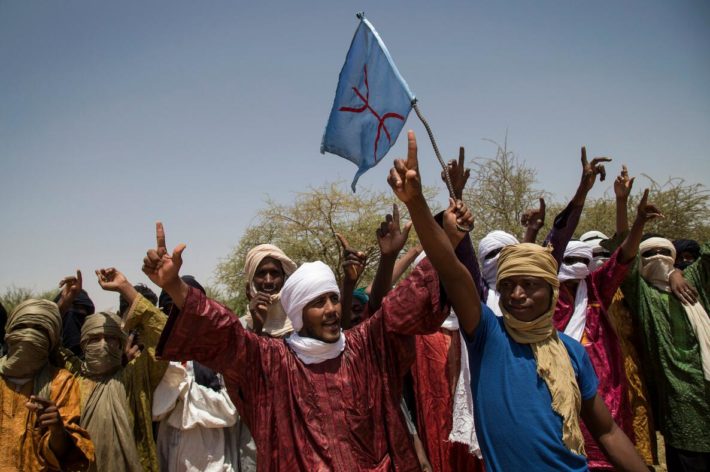