Islam is state religion in Mauritania and almost the entire population is Sunni Muslims. Many of them are supporters of Sufis fraternities, especially Qadiria and Tidjania. The desert city of Chinguetti is locally called the seventh holiest site of Islam.

According to Mauritanian law, missionary activities are prohibited and foreign missionaries have been arrested and expelled several times. Only Muslims can be citizens.

There are a few thousand Christians in the country. In the countryside, small groups of adherents to traditional African religions live. 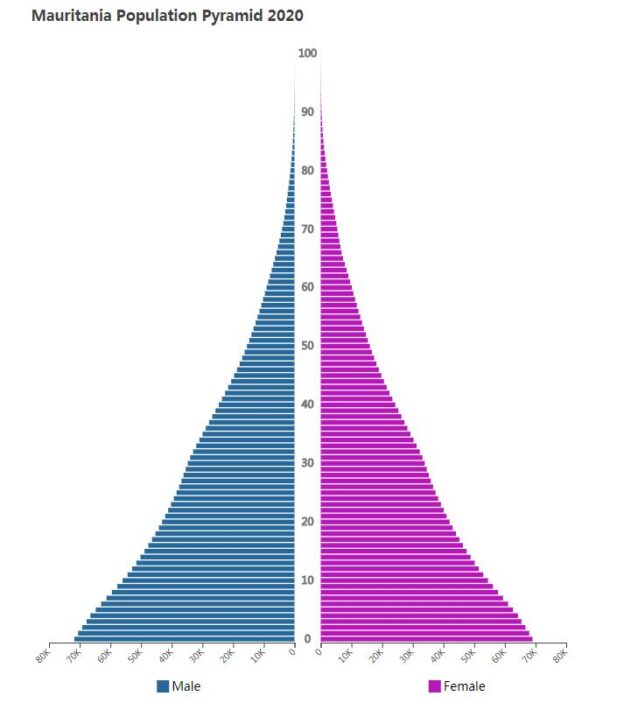 West African leaders agree to jointly invest $ 1 billion over the period 2020-2024 to combat violence from militant Islamist groups in the region. The decision is made at a meeting in Burkina Faso’s capital Ouagadougou. Attending the meeting are political leaders from the 15 countries that are part of the West African cooperation organization Ecowas as well as the Mauritanian and Chad presidents. The money should be invested in a common fund. How they are to be distributed will be presented at a forthcoming summit in December. Ecowa’s leader Jean-Claude Kassi Brou says that jihadists has carried out 2,200 attacks since 2015, which claimed a total of about 11,500 casualties and driven hundreds of thousands of people to flight. He calls on the UN to strengthen its peacekeeping force, Minusma, which has been stationed in Mali since 2013. There is also a special force, the G5 Sahel, which Burkina Faso, Mali, Chad, Niger and Mauritania, launched together with France in 2017. But it suffers from a great lack of resources, and the force so far only consists of 4,000 soldiers instead of 5,000 as planned.

The candidate of the ruling party wins the presidential election

The opposition split before the election

The election campaign for the June 22 presidential election begins. The opposition has failed to agree on a joint presidential candidate. Instead, five opposition candidates challenge the military-backed General Mohamed Ould Cheikh el Ghazouani, who is running for the ruling UPR. According to the constitution, President Abdel Aziz is not allowed to stand for re-election. Among the opposition candidates are Mohamed Ould Maaloud, supported by Tawassoul, the anti-slavery movement’s candidate Biram Dah Abeidwho and former Prime Minister Sidi Mohamed Ould Boubacar. The opposition has complained that there are too few independent election workers and accused the UPR of engaging in voice buying in the countryside.

A new round of conversation about Western Sahara concludes with the finding that the parties are far apart. Foreign ministers from Morocco, Algeria and Mauritania and the Saharan Liberation Movement Polisario’s negotiating head have agreed, after a two-day meeting, that the UN-led talks – which resumed in December after six years fully on ice – should continue “before the summer”. The Polisario continues to demand that the Western Sahara be given a referendum. Morocco, which keeps Western Sahara occupied, says no.

Sidi Mohamed Ould Boubacar is running as an independent candidate in the presidential election to be held later in 2019. He is, however, backed by the opposition Islamist party Tewassoul. Boubacar was Mauritania’s prime minister in 1992–1996 and 2005–2007.

The Mauritanian Ministry of the Interior dissolves via a decree 76 political parties that did not participate in municipal elections in 2013 and 2018 or who failed to get more than 1 percent of the vote in these elections. This means that 28 political parties remain ahead of the presidential election to be held in 2019. In addition to UPR’s candidate Mohamed Ould Cheikh el Ghazouani, opposition MP and anti-slavery activist Biram Ould Dah Abeid has also said he is running for election.

The UPR government presents General Mohamed Ould Cheikh el Ghazouani as its presidential candidate in the upcoming elections. No election date has been set yet, but elections will be held in 2019. Ould Ghazouani was the army chief of staff until October 2018 when he was appointed Minister of Defense. He stands close to President Ould Abdel Aziz, who he helped implement two coups in 2005 and 2008 that brought Ould Abdel Aziz to power. The president has probably appointed Ould Ghazouani as his successor after the army opposed the president’s attempt to be re-elected in violation of the constitution.