Morocco is deeply influenced by Islam, which is the country’s state religion. The royal family claims kinship with the Prophet Muhammad and religion is an important basis for the historical and political legitimacy of the monarchy. Almost the entire population is Sunni Muslims.

Many different Sufic fraternities (who practice different kinds of Islamic mysticism) are active in Morocco, but their influence varies between different countries. The Shi’a Muslims in the country are mainly immigrants from other countries.

The monarch is, according to the Constitution, the spiritual leader of the Moroccan Muslims – amir al-mu’minin, a very old title that is often translated “the ruler of the faithful”. The government supports the practice of Islam financially and politically and presents itself as a protector of Morocco’s Islamic heritage. In 1993, one of the world’s largest mosques in Casablanca was completed, the Hassan II Mosque. In 2005, a state TV channel was established for reading from the Qur’an and religious programs.

Islamist groups, however, who want to build a state based on religion have often questioned the legitimacy of the monarchy. Some expressly turn to the King’s claim to be amir al-mu’minin, for example the illegal (but peaceful) fundamentalist group Justice and Spirituality (al-Adl wal-Ihsan). The government oversees mosques and religious groups, and has often resorted to brutal means against Islamist groups, whose members have been arrested and tortured.

The increasing popular support for the Islamists under King Mohammed’s rule has forced the government to make concessions to religious movements, while at the same time harsh measures have been taken against more uncompromising or violent groups. After terrorist attacks in Casablanca 2003 (see Modern history) the authorities tightened the control of several thousand unofficial mosques. In the 2011 election, for the first time, the moderate Islamist party won PJD, whose chairman Abdelilah Benkirane became the country’s first Islamist prime minister.

Christians in small numbers have been in Morocco since Roman times. Today, the Catholic Church, which is clearly the largest of the Christian communities, is believed to have up to 35,000 followers. During the colonial era (until 1956), Christians were outwardly ten times as many. Students and migrants from sub-Saharan countries have replaced Christians of European origin; that it is precisely the groups that have grown up have caused the average age of the church activists to be relatively low. There are between 40 and 50 churches left, and two bishop’s seats, Rabat and Tangier. 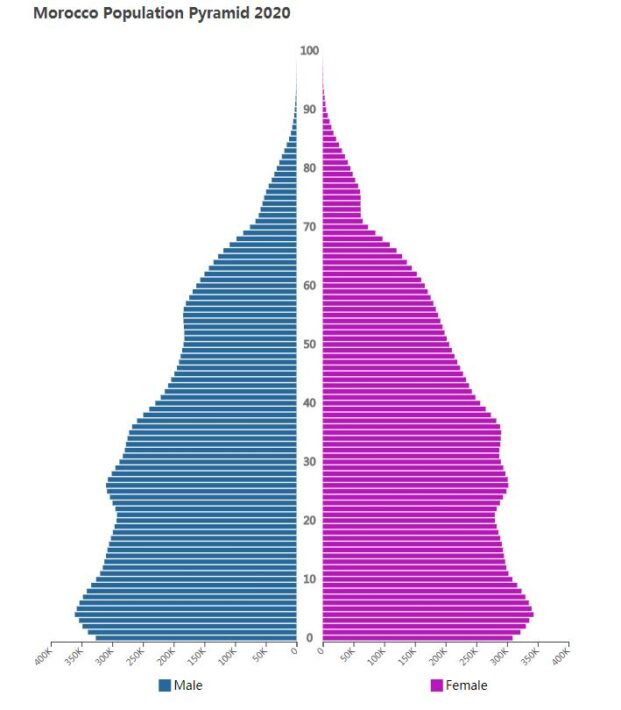 The Jewish presence goes far back in time and grew when Spain’s Catholic rulers expelled Jews from Spanish soil in 1492. In the mid-1900s, there were about 300,000 Jews in Morocco, but after the founding of modern Israel and Morocco’s independence, most emigrated to Israel. Today, up to 4,000 Jews are estimated to live in the country, most in Casablanca. Morocco’s Jewish cultural heritage has begun to gain more attention in recent years (see Calendar).

The religious minorities are in principle free to exercise their faith. Unlike in countries with stricter laws, such as those in the Persian Gulf, those who leave Islam do not risk the death penalty, but it is forbidden to mission among Muslims. It happens that the police seize Bibles and other writings suspected of being converted to Muslims, and foreign Christians have been expelled for suspecting to be missionaries. The authorities have in recent years persecuted and harassed Shia Muslims, which seems to be linked to Morocco’s poor relations with Shia Muslim Iran. Prejudice against Jews occurs, usually related to the Israel-Palestine issue, and Islamist groups have often expressed themselves hostile to Jews. Terrorist attacks in Casablanca in 2003 targeted Jewish institutions.

A man is arrested who is suspected of conspiring with IS and of having participated in planning an attack in Paris. French security services must have arrested several others who were part of the same group. Recently, eight people were arrested in Fès and Tangier, also suspected of being linked to IS, according to information from the Interior Ministry.

Morocco and several other Arab countries are holding a summit with African and Arab countries in Equatorial Guinea, in protest of the participation of a delegation from Polisario.

Unusual protest wave in the north

Thousands of Moroccans are taking part in protests in northern Morocco following a call on social media against government violence. The background is a fish vendor who was crushed to death in a garbage truck in the city of Al Hoceïma, when he tried to retrieve fish that police seized. Many draw parallels to the vegetable vendor in Tunisia, which in late 2010 triggered the so-called Arab Spring (see Tunisia-Modern History).

Benikrane has the task of forming a government

The King assigns the PJD leader the task of forming a new government. But it should prove difficult. He is supported by Istiqlal and PPS. But RNI, MP and CU demand to participate as a single bloc, which Benikrane rejects. Cooperation with PAM is excluded.

Election to the House of Representatives

The PJD strengthens its position in the election to Parliament’s directly elected chamber and remains the largest party. PAM is progressing strongly and pushing Istiqlal to a third position.

The African Union confirms that Morocco has formally requested to re-join, after 32 years. The AU Commission must approve the request.

The UN chief calls for calm in Western Sahara

UN Secretary-General Ban Ki-Moon calls on Morocco and Polisario to withdraw troops from the normally deserted Guerguerat zone near the border with Mauritania, where the parties are now fighting close to each other. The location is tense in the area. Earlier this month, the Polisario made a protest to the UN against the Moroccans’ construction of an asphalt road in the area.

PJD conductor is switched off

Two high-ranking PJD representatives are suspended after being arrested after being found in a “sexual position” on a beach in Rabat. The man and woman, both over 60 years old, are both vice-chairmen of PJD’s ideological and religious branch. The incident, which is troublesome for the Islamist party, occurs just over a month before the parliamentary elections.

The King calls for religious tolerance

King Mohammed urges Moroccans abroad, mainly in Europe, to distance themselves from extreme forms of Islamism. People of Moroccan origin have been involved in several recent terrorist acts in Europe. In his speech, the king mentions in particular the murder of a priest in a church in France.

A formal proposal will be presented to the parties involved and neighboring countries, says a UN spokesman, and the envoy Christopher Ross is ready to travel to the region to bring new life to the negotiation process, it states. Relations with the UN continue to be strained and only some of the UN employees ordered have been allowed to return (see also March and April 2016).

Authorities say 52 people have been arrested on suspicion of planning to establish a Moroccan branch of IS and carry out terrorist acts in the country.

Decides to raise the retirement age for civil servants from 60 to 63 years; The change will be introduced gradually from 2017. Trade unions have protested against the plans throughout the year, but the government says the reform is necessary as the state pension fund is close to collapse, with a debt of around $ 56 billion.

King Mohammed said in a statement in connection with an AU summit in Rwanda that it was time for Morocco to regain its place. He urges the AU to re-evaluate the “phantom state” of Western Sahara membership.

Five UN employees return to Western Sahara since Morocco has given the go-ahead for 25 out of a total of about 75 expelled to return (see March 2016).

Morocco receives $ 100 million for better education for girls, in an aid package presented by US President Wife Michelle Obama, who is visiting with her two daughters and actress Meryl Streep, among others. The rate of illiteracy among women is high in Morocco, and the proportion of women in the workforce is among the lowest in the world.

The secretary general of Polisario as well as president of SADR, Mohamed Abdelaziz, dies in the suites of lung cancer, 68 years old (see also December 2015).

The Foreign Ministry is calling on the US ambassador to Rabat to protest against the US Foreign Ministry’s annual report on human rights in the countries of the world, where Morocco is criticized for corruption and illegal actions by the security forces.

Around 150 convicted salafists and their family members are demonstrating outside Parliament demanding a new investigation into the suicide attacks in 2003 (see Modern History). They call it the biggest lie in Morocco’s history. Many of the more than 1,000 people arrested after the attacks are still in prison.

The Security Council extends Minurso’s mandate by one year. At the same time, it is decided that Minurso will once again become “functional”. It is unclear whether Morocco will allow civilian UN personnel to return to the area. Nevertheless, the UN states in its resolution that the parties must prepare for a fifth round of talks. Four rounds have been held since 2007, with no progress.

Around 80 civilian UN employees are forced to leave the country immediately. Three days later, the World Organization withdraws the three military observers and closes its liaison office in Dakhla, also at Rabat’s request.

No break with the EU

Relations with the EU should be resumed, the government says, after Mogherini promised during his visit earlier this month to resolve the conflict.

The Foreign Ministry’s threat to withdraw Moroccan soldiers and Moroccan funding from peacekeeping efforts is a protest against Ban Ki-Moon’s speech about “occupation” of Western Sahara.

The Secretary-General expresses “deep disappointment and anger” over the demonstration against him and feels the lack of respect for him personally and for the UN.

the 13th of March

Hundreds of thousands of Moroccans demonstrate in Rabat against Ban Ki-Moon because of statements he made about Western Sahara. According to the official MAP news agency, more than three million people are participating in the protest. Ban has stirred up emotions in Morocco by visiting a refugee camp for Western Sahara in Algeria and using the word “occupation”, as well as talking about new peace talks between Rabat and Polisario.

Federica Mogherini meets with Foreign Minister Salaheddine Mezouar to discuss relations since Morocco has broken with the Union (see February 2016). The EU has said that the court’s decision has been appealed.

Subjects seized by the arrested jihadists (see February 2016) are classified as potential biological weapons and can be used to cause nerve damage and death, the Ministry of the Interior said.

Morocco breaks with the EU

The decision to freeze all ties with the EU follows the ECJ’s ruling on the agricultural agreement (see December 2015). According to Morocco, the decision is “very political” and violates international law

Jihadist cell is reported to be detonated

The Ministry of the Interior reports that ten members of a terrorist group have been arrested. They are suspected of having ties to IS and planning attacks in Morocco.

The furniture giant has now been given a clear sign to open its department store in Casablanca. The Swedish government made it clear in January that it is not relevant for Sweden to recognize Western Sahara (see September and October 2015).