Morocco is a kingdom in North Africa. The country borders east to Algeria and south to Western Sahara, a disputed area that Morocco claims and has occupied since 1976. Morocco has a long coastline to the Atlantic, a smaller one to the Mediterranean in the north, with a sea border to Spain. Official languages ​​are Arabic and Tamazigh (approved in 2011); French and partly Spanish are widespread.

Morocco consists of former French and Spanish protectorates, the former international zone of Tangier and the former Spanish enclave Ifni. Morocco, which became an independent kingdom in 1956, claims the cities of Ceuta and Melilla as well as some small islands off the Mediterranean coast that still belong to Spain.

Morocco’s older history is significantly linked to the Berber population (amazigh) and the influence of trade and immigration, both from the south, east and north. The greatest impact has been the immigration of Arabs in the 600s – with a persistent Arabization and Islamization. Morocco was the westernmost province of the Roman Empire, and has historically formed the western border of the Arab world. Today’s Alawi dynasty traces its roots back to Prophet Muhammad.

The name Morocco is derived from the city name Marrakech, “the jeweler”, via Marruecos and Marrocos in Spanish and Portuguese. The Arabic name of the state means “Western kingdom.”

Morocco’s national anthem is Manbit al-ahrah, Masriq al-anwar (“The Source of Freedom, the Source of Light”).

Located on both the Atlantic and the Mediterranean, Morocco is topographically dominated by the alpine Atlas Mountains that extend through the country in the southwest-northeast direction. The Middle Atlas mountain range rises to over 3000 meters above sea level. In the southwest, it runs alongside the High Atlas, where the country’s highest mountain Jabal Toubkal projects 4,165 meters above sea level. To the south of these lies the Antiatlas Mountains; towards the Mediterranean Rif mountain e. In western Morocco there is a plateau cut by river valleys.

Geography and topography contribute to Morocco having good rainfall in the form of both rain and snow. Large parts of the country have a Mediterranean climate.

Morocco’s nature is composed in a geological transition zone between Africa’s plains and the alpine mountain system. In the north there is Mediterranean vegetation, including cork oak and rock oak, with aleppo fur and cedar in the mountains. Eucalyptus is planted.

In addition to forests there are large steppe areas as well as desert. Southeast of the mountains there is pure desert vegetation. Many large mammals, including elephant and lion, were exterminated hundreds of years ago. There are just over a hundred species left. The bird fauna is Mediterranean in character with species that are otherwise only found south of the Sahara. Among the migratory birds that go to Morocco is the stork. 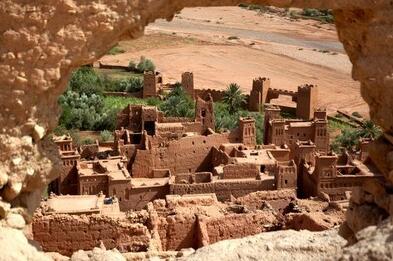 Morocco has in recent years reduced the birth rate, and has a lower population growth than most African and Arab countries (about one percent). About a quarter of the population is under 15 years of age.

The population is particularly concentrated in the plains and mountains in the north and west, with a concentration on the big cities. About 63 percent live in cities (2019), and the population there increases with migration from the countryside. The largest cities are Casablanca, Rabat, Fès and Marrakech. High unemployment has led to extensive labor migration to Europe, especially France.

The once-significant Jewish minority has mainly emigrated. Practically the entire population is Muslims (Sunnis) and Islam is state religion. 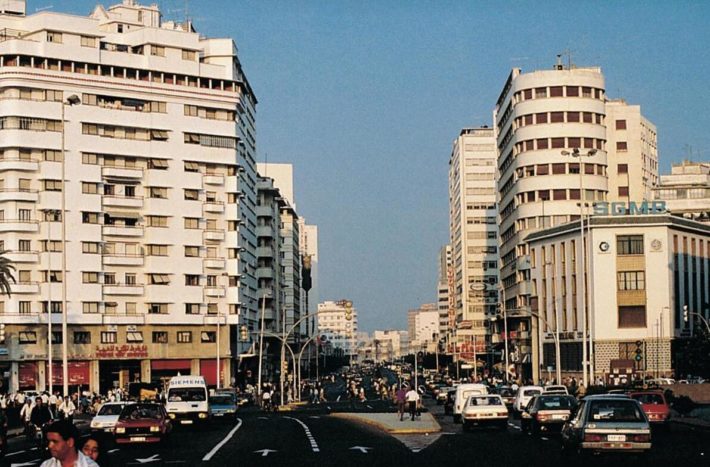 On the west coast lies the country’s largest city, Casablanca. The city has larger areas of European high-rise buildings side by side with neighborhoods with traditional Arab settlement.

Morocco as an independent state was created by merging territories controlled by France and Spain into one state. Formally, these had had the Moroccan king as ruler.

By the independence of 1956, Morocco became a constitutional monarchy. The country is considered a relatively democratic society that allows multiple parties and holds free elections. Following the new constitution passed by referendum in 2011, the king is obliged to appoint a prime minister from the party with the greatest support in parliament. The Constitution stipulates that coalition governments must be established. The king still has extensive power.

Morocco has significant internal tensions, and experienced a number of demonstrations during the Arab Spring in 2011-2012. The protests were aimed partly at restrictions on civil rights and widespread corruption, and partly at financial challenges and increasing social divisions.

The conflict over Western Sahara has dominated Morocco’s foreign policy, and has contributed to a partial isolation both in Africa and the Middle East, and to a closed border with Algeria. Morocco has traditionally good relations with the West, and close cooperation with the EU.

Morocco’s oldest history is documented, among other things, by approximately 400,000-year-old fossil bones from human ancestors. The group that is considered to be the region’s original population, the Berbers (imazighen), then came to the area about 5,000 years ago.

Morocco traded among other Phoenicians and Carthage, and parts of the country were a Roman province. The later Morocco is especially shaped by the Arab influence of the late 600s. Several Berber dynasties emerged, two of which became dominant throughout the region: the Almoravids and the Almohads.

Morocco was subject to European influence especially from the 17th century, but both Englishmen and Spaniards were expelled from the area. The Alawitt dynasty managed to maintain independence, but today’s Morocco became partly a French and partly a Spanish protectorate in 1912. Resistance to these was defeated, but the Moroccan king retained his throne. Allied troops landed in Morocco in 1942, accelerating independence in 1956.

Morocco has occupied the former Spanish colony of Western Sahara, opposed to its independence, and waged war on the liberation movement there. 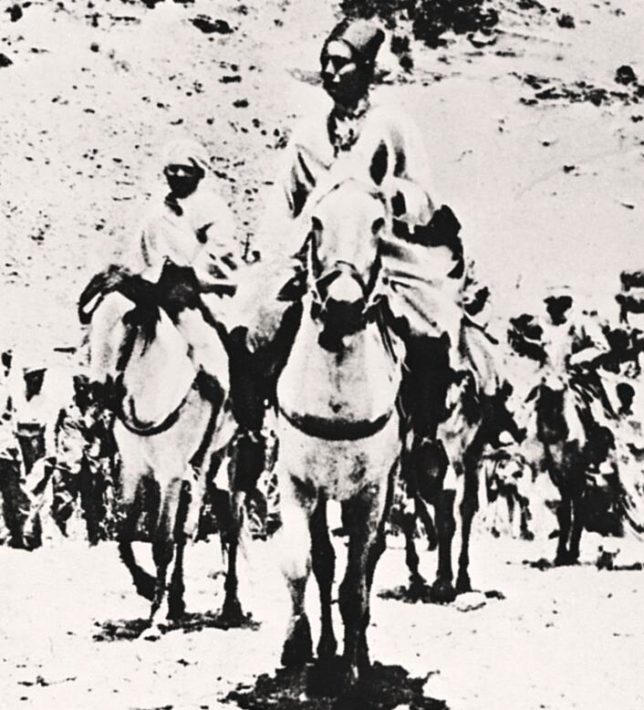 In 1912, Morocco was divided into a French and a Spanish protectorate. In the period 1919–34, French and Spanish forces fought the resistance of Berbers inland. The picture shows the rebel leader Abd al-Crimea, who rides into the French commander’s camp, after surrendering in 1926.

Morocco has a complex economy with a significant element of industrialization and a large service sector, including the tourism industry. Agriculture has remained important in terms of both employment and exports. None of these sectors are capable of generating enough employment, and a lack of jobs has led to unemployment and emigration.

The country has significant, untapped potential for electricity generation. Ample water supply for irrigation also raises the potential for agricultural growth, with opportunities for self-sufficiency in food.

Morocco mainly produces and exports agricultural fruits and vegetables, and produces meat to meet its own consumption, mostly sheep and cattle. Fishing, especially of sardines and tuna in the Atlantic, is significant, but is best exploited by EU trawlers. Mineral exports, essentially phosphate – including illegally exported phosphate from Occupied Western Sahara – are crucial to government revenue.

Money transfers from Moroccans abroad are also an important source of income. The economy has been liberalized since the 1980s, partly through the privatization of state-owned enterprises. 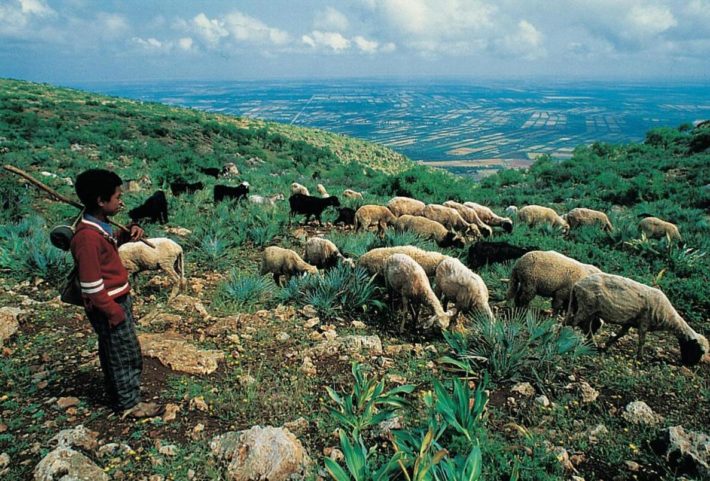 The livestock sector in Morocco is substantial, and despite the fact that in many places it produces low returns, the country is almost self-sufficient with meat.

Morocco is part of the Arab culture, but, like other countries in North Africa, is influenced by the European colonial era – both from France and Spain. At the same time, the country is characterized by the traditional Berber culture and the influence of Islam, including the large Moorish population who settled in the country after being banished from Spain.

The country has several well-known authors in both the Arabic- and French-speaking cultural circles. Traditional art is inspired by both Arabic, Islamic Arabic and Western art; Islamic crafts – as well as the music form maghrib – from Andalusia.

Following independence, Morocco has developed a modern education system with compulsory schooling for the age group of 7 to 13 years. Not all children attend school, and fewer girls than boys. Relatively few young people take higher education, and illiteracy has remained relatively high; about 1/3. Morocco has a number of universities and other colleges.

The country has a varied media image, dominated by state broadcasting, and a relatively free press; Most newspapers are affiliated with a party.