Niger was a colony of West Africa and became “Separate Colony” in 1922. Capital was first Niamey, then Zinder, then again Niamey.

With the referendum of 28 September 1958 it had autonomy but always within the French community. According to Abbreviationfinder, an acronym site which also features history of Niger, he gained complete independence on August 4, 1960, President H. Diori and on September 20 of the same year he was admitted to the United Nations.

On April 24, 1961 several treaties were signed with which, in union with France, collaborative relationships were established in the field of economics, finance, forests, military, cultural and administrative cooperation and also customs union with all countries. of the former French West Africa, excluding Guinea.

After the proclamation of independence there was a period of political stability; but in April 1974 there was a military coup and power was managed by Colonel Seyni Kountchè. Under this regime there were two subversive attempts, one from 1975 and one from 1976; both failed.

Instead, it was possible to count on a certain economic stability, imposing restrictions on certain foreign activities, changing agreements for the exploitation of uranium, and even in the agricultural field some progress was achieved despite the damage caused by a terrible drought.

In 1980, applying a reconciliation policy, Kountchè authorized the gradual release of political prisoners, including former President Diori, who remained under house arrest until 1984, and D. Bakary, leader of the Sawaba party.

In the same year, when Libya invaded Chad, he loosened relations with Tripoli and forged stronger relations of friendship with the conservative Arab states and with Tunisia, Algeria and Morocco.

In 1982, plans began to be drawn up for a return to a form of constitutional government, but these had no practical application and the governmental role of the military was confirmed, even if Prime Minister O. Mamane was a civilian. And in October 1983 yet another military coup failed causing repression and purging. Kountchè entrusted the post of prime minister to H. Algabid, of Tuareg ethnicity, while leaving Mamane at the head of the “National Development Council”, and meanwhile he was preparing to prepare a “” Initial Charter “, containing new constitutional principles.

In the years 1984/85 the country experienced one of the worst droughts in its history; the main help came to the peoples of Niger from many countries of the world, first of all the United States.

In 1985, in the north-eastern part of the country, there was a clash with the Libyans due to connections of Tuareg dissidents with Tripoli. Then all the non-Nigerian Tuaregs were expelled.

In June 1987 the “National Charter” was approved which proposed undoubtedly more democratic methods of government.
In November of that same year Kountchè died in Paris; he was succeeded by a cousin, A. Saibou, who continued the policy already in place but with greater openness to the opposition.

He granted an amnesty by calling the refugees back home and in dialogue with Diori and Bakary. In 1988 he had to face student protests against cuts in education costs. Mamane returned to prime minister and was charged with drafting a new constitution. The ban placed in 1974 was removed from the political parties. In January 1989 the new Constitution was approved and in December of the same year Saibou was confirmed in office and the Second Republic was proclaimed.

Student and trade union demonstrations began again in 1990, which were repressed, but Saibou was forced to recognize some political freedoms and convene a National Conference. This began work in July 1991: first the Constitution was suspended, then a provisional government led by A. Cheiffou was appointed, while remaining president without any Saibou power and the military were exempted from any political power.

In December 1992 a new Constitution was approved and in February 1993 the legislative elections took place, followed in March by the presidential ones, and the winner of these uiltime, M. Ousmane, on April 16 was officially declared President of the Republic.

The premier, however, was M. Issoufou whose government first dealt with the areas north of the country, those inhabited mostly by the Tuareg, with whom constant armed clashes were standing.

Using also the French mediation, it was possible to formulate an agreement between the parties and the central government decreed extensive economic aid to the region at the same time as the demilitarization. And in January 1995 a special commission was set up to plan and implement a complete administrative reorganization.

But in the meantime in January 1994, after the devaluation of the currency, there had been a noticeable deterioration of the economy which also caused some political instability. This led to disputes between the President and the Premier and the latter resigned.

Early elections were held in January 1995 and the National Movement for a Development Society-Nassara won, whose secretary, H. Amadou, became prime minister and formed a coalition government.

He, aided this time, as well as from France, also from Algeria and Burkina Faso, resumed negotiations to resolve the Tuareg issue. An agreement was reached between the parties in April 1995. And with this the government committed itself to experimentally integrating the rebels into the regular forces, and to carry out a decentralization of the administrative bodies so that the north, home of the Tuareg, enjoyed a certain autonomy, all under the control of the three powers mediators.

However, persisting the old tensions between the President and the Premier, an institutional crisis occurred in July 1995 which, after several demonstrations by students, civil servants and soldiers, led to a coup d’état, in January 1996, led by Colonel I.Barè Mainassara, who suspended the Constitution, dissolved both the National Assembly and the parties, and proclaimed a state of emergency.

All this came to the attention of the western world from which, while humanitarian aid continued to arrive, other types of aid were interrupted. The International Monetary Fund also interrupted dialogue with Niger which, fearing precarious political isolationism, established a government of civilians, headed by the vice-governor of the Central Bank of West African States, B. Adij.

And in January 1996 an agreement was reached between all political forces and the path to democratization of the country was resumed. In May 1996, with a popular referendum, a new Constitution was approved, marked by a strong presidentialism.

Then Colonel Barè Mainassara in July was elected President of the Republic while the legislative elections, held in the midst of a climate of strong protest, were won by the National Union of Independents for Democratic Renewal, close to the President. 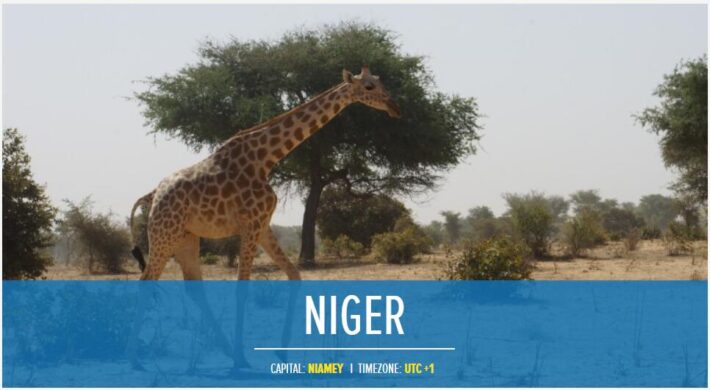 The new Premier, A. Cissè, in office since December 1996, immediately started going uphill because he had to handle a wide range of political protests. In February-March of the following year, all public services, schools and many other sectors called for strikes and street rallies, calling for new elections. At the same time, tensions with the Tuaregs had also recovered in the north, not satisfied with the treatments received so far.

In April 1999 Barè Mainassara was assassinated and then Major DM Wanke formed a National Reconciliation Council and, after having taken full powers upon himself, promulgated a new Constitution that placed a limit on the powers of the President.

Then in November 1999 new elections were held which were won by the National Movement for a Nassara Development Company, whose candidate, M. Tanja, was elected President.