In Nigeria, there are slightly more Muslims than Christians. About a tenth of the residents practice traditional indigenous religions. Islam dominates in the north and is strongly associated with the culture of the Hausa-Fulani people. Yoruba includes both Christians and Muslims, while Igbo is largely Christian.

Contradictions between religious groups have long existed in Nigeria. The 1966 massacre of tens of thousands of Christian Igbois in Muslim areas of the north was one of the factors that triggered the Biafra war (see Modern History). According to the constitution, state and religion should be separate. Despite this, religion has come to play an increasingly important role in politics since democracy was reestablished in 1999. Twelve states, in practice throughout northern Nigeria, introduced sharia laws in 2000–2001. With strict interpretation of Islamic jurisprudence, this means that stoning, mutilation and punishment are applied. Christian fundamentalism has also grown rapidly in recent years. Bloody clashes between Christians and Muslims are a recurring phenomenon.

Most Muslims are Sunnis, but there is a growing proportion of Shiites. Islam came to northern Nigeria as early as the 11th century, via trade routes through the Sahara. Religion gained an early foothold in the cities and Muslim leaders established feudal small states. It was mainly in the 19th century that Islam gained its current spread in Nigeria. The rulers of the north, the emirs, also remained under British colonial rule when they formed a powerful political elite. Even in independent Nigeria, most of the leading politicians have come from the Muslim areas of the north.

In central Nigeria, people resisted coming under Muslim rule. In the 19th century, Islam was spread by Fulani with the help of religious war, jihad, into the areas of the Yoruba people in the southwest. At the same time, missionaries in southern Nigeria preached Christianity. Adopting Islam, or being baptized as a Christian, became a way for people in vulnerable areas to save themselves from slavery, as the slave traders failed to capture and sell those who belonged to their own religion. Yoruba, like the peoples of central Nigeria, was divided into groups of Christians, Muslims and followers of traditional religions. Igbo and other peoples in the southeast became largely Christians, mostly Catholics. 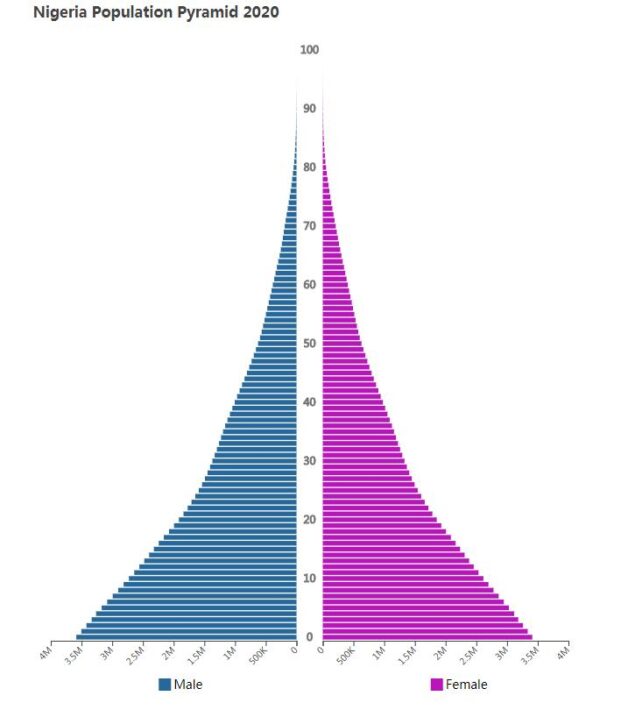 More than 400 peoples and ethnic groups with mostly their own languages ​​and different religions live together in the densely populated, multi-ethnic state of Nigeria.

The colorful mixture of different peoples and cultures in one state is the result of the colonial demarcation. Since the country gained independence in the “African year 1960”, for example, Sometimes it led to considerable political and religious tensions between the peoples.

Between 1967 and 1970 such tensions erupted in a civil war that claimed an estimated 2 million lives. Most of the victims were starving children.

With well over 100 residents / km² Nigeria is a relatively densely populated country.

The settlement focus is the region around Lagos in the southwest of the country, in which the largest Nigerian cities are located.

Almost half of all Nigerians now live in cities. Growing urbanization is the result of ongoing rural exodus, especially among younger Nigerians, who are no longer able to find a “place” in rural areas due to the high population growth. They hope for work and prosperity in the cities, but mostly only strengthen the army of the unemployed.

That is why the poor quarters in which millions of people vegetate grow around the Nigerian cities.

The country’s population grew rapidly at 2.9% a year at the end of the 1990’s. Therefore the population of Nigeria is relatively young. Despite the high child mortality rate, around half are younger than 14 years. Since the country is suffering from increasing poverty, the proportion of illiterate people has risen again from 50 to 70% in recent years, despite compulsory schooling.

Among Yoruba, Christians and Muslims are about the same number today, while a small proportion hold to their ancestral religion with its many gods. However, Yoruba is traditionally religiously tolerant. Members of the same family may belong to different religions, and Yoruba Muslims have tended to have greater affiliation with Christian Yoruba than with believers in the north. The traditional Yoruba religion, where kings play an important role, has through the slave trade got depositors as far away as Brazil (in the faith known as candomblé). So-called aladura churches mix Christianity with indigenous religion and are found mainly in Yorubaland and in non-Muslim areas in central Nigeria.

Competition with the Pentecostal churches in the mission field is believed to promote a strict Biblical attitude among Anglicans. One aspect of their conservatism is that it is a defense against Muslim fundamentalism. The Anglican attitude is, after all, more tolerant than that found in the Sharia Laws in Northern Nigeria. Many Christians are also afraid of being associated with Western immorality and decadence, since accusations in that direction sometimes result in bloody persecution.

When the Sharia was introduced in the north, many Christians who lived there protested, even though the laws were not intended to be applied to them. Severe unrest erupted in several directions (see Modern History). There were suspicions that marginalized politicians from Northern Nigeria were behind much of the unrest. Many Muslims hoped that Sharia would create justice for the poor as well, in a legal system that was otherwise permeated by corruption. By introducing Sharia, the emirs also wanted to become popular with young radical Islamists, who began to turn to their feudal rule. Nigeria’s traditional leaders have little formal power but can still have a great influence in society, especially in the northern part of the country.

In the 1990s, in accordance with the Sharia law, more than ten death sentences were sentenced through stoning, including for women accused of adultery. The judges aroused strong protests in both Nigeria and the outside world, and in all known cases, they were pardoned or sentenced to prison instead. However, at least a couple of thieves have had their hands cut off, and many Muslims who have been caught drinking alcohol have been whipped.

The conflict over Sharia law in the north gradually lost its explosive power. But as a result of conflicts between religious groups in central Nigeria, hundreds have been killed in clashes. In 2009, Islamist sect Boko Haram took up arms mainly in northeastern Nigeria, with demands for Sharia throughout Nigeria. It evolved into a bloody conflict that soon became the country’s biggest security problem (see further Current Policy).

They last until after New Year and require over 100 casualties. Boko Haram says it is behind an attack on a church that calls for some 30 casualties in the city of Maiduguri in the northeast.

Violence at the 50th Anniversary

In connection with the celebration of Nigeria becoming an independent state, two car bombs are exploding in Abuja, killing twelve people. Mend takes on what is said to be the group’s first attack in Abuja. Among several Mend leaders who refrain from the attack are Henry Okah who is nevertheless arrested again (see July 2009), in South Africa, accused of terrorism.

The Nobel Laureate in Literature plans to run for election in 2011 with the Democratic Front for a People’s Federation.

Boko Haram storms a prison in the state of Bauchi and releases 700 prisoners.

On May 6, Jonathan swears the oath and becomes President.

Jonathan appoints a new government after dissolving it earlier.

Violence between people groups in Plateau

The army is in the highest readiness in the state, since about 500 Christians belonging to the people group are believed to have been killed by Muslim Hausa-Fulani.

The president back in the country

Yar’Adua unexpectedly returns from Saudi Arabia but does not appear in public.

The Vice President takes over

Mend protests that the government side did not live up to its promises in the amnesty and disarmament agreement.

Around 400 people are reported to have been killed in new clashes between Muslims and Christians in the city.