Colony of French Equatorial Africa, it is divided from the Belgian Congo by a tributary of the Congo River, which is the Ubanghi.

The tributaries on the right represent important ways of communication with the countries of the interior, and for the fluvial transport of goods, which counts on a very well equipped navigation service, which belongs to Brazzaville, the capital. While land transport is ensured by the railway that connects Brazzaville with Pointe Noire, an important port, equipped to receive light ships.

According to Abbreviationfinder, an acronym site which also features history of Republic of the Congo, the most common goods in the trade are ivory, palm oil and walnuts, copal gum, rubber and papyrus. Important is the mining region of Mindouli and M.Boko-Songo.

Overseas territory of the French Republic was very well equipped with European farms and plantations; the cultivations and export of coffee and cocoa were always excellent. There are numerous deposits of gold and diamonds, those of lead in M’Fouati and those of zinc.

As soon as the Republic was proclaimed, a new Constitution was launched and the young state immediately became part of the Customs and Tax Unions of the other republics of French Equatorial Africa. These republics, in the Brazzaville Conference of 22/23 June 1959, established a further conference among their Prime Ministers.

The following year, again by virtue of the plan drawn up by France for the granting of autonomy to the former colonies, from August 13, 1960 the Congo was able to enjoy this privilege, while remaining in the orbit of the Community, and was admitted to the United Nations the following 20 September.

In January 1961, President F. Youlou, an authoritarian and pro-Western tendency man, in order to govern in a climate of national conciliation, elected opposition leader J. Opangault as vice-president.

On March 2, 1961 the Constitution was passed. In August 1963 both the unions and the army forced Youlou to leave office and installed Minister A. Massemba-Debat there. A single party was formed, the “National Revolutionary Movement”, which had its Congress in 1964 and its “Charter” in 1966. This party was joined by a popular militia.

Meanwhile, however, there were tensions between the various northern tribes, those of the center, the urbanized populations of the south, moderate pro-Western elements and young elements of socialist tendencies.

In 1968 there was a serious crisis; Massemba-Debat was overthrown and the armed forces, led by Marien Ngouabi, took over and on 31 December 1968 became the head of state.

In 1969 a new party, the “Parti Congolaise du Travail” replaced the “Revolutionary Movement”. The regime was of declared Marxist tendencies and on March 3, 1970 a new Constitution entered into force which made Congo a People’s Republic.
There were subversive attempts, soon silenced, and in 1973, by creating a Revolutionary Court, Ngouabi was able to convict the conspirators.

With the entry into force of the Constitution there were elections for the National People’s Assembly and for local administrations and in 1974 a Supreme Defense and Security Council was established.

Ngouabi visited several socialist countries at the time, such as the Soviet Union, Eastern European states and popular China. His Congolese government was one of the most pro-communist in all of Africa. Agreements were maintained, however, with France and also with African countries of different political systems.

In March 1977, in circumstances never cleared up, Ngouabi was killed. His successor, Colonel J. Yhombi-Opango tried to change politics, given the country’s uncertainty and instability. But it was not easy to move from the theory of socialism to practice, and with the presentation of various difficulties, an institutional crisis came again that brought Colonel D. Sassou-Nguesso to power who, with his cult of the personality of Ngouabi, wanted to continue his ‘Opera.

In July 1979 another constitution, inspired by socialism, was adopted. In 1981 Sassou-Nguesso signed a cooperation pact with the Soviet Union and organized the single party in government with a strict communist ideology. He continued to maintain active relations with France and tried to juggle the various tribes which, professing different political and economic principles, made it very difficult to govern.

The country’s economic program for 1982/86 prioritized the northern tribes. Those from the south rebelled, which caused several serious accidents in November 1985 in Brazzaville, caused by students.

And so the Congo, after 1986 was forced to the dictates of the International Monetary Fund, which imposed: the contraction of public investments; the restructuring of state-owned companies and the privilege to private capital.

Between the end of 1990 and the beginning of 1991, a very important turning point was applied to the politics of the country; Marxism-Leninism was abandoned as an official ideology, and multiparty was implemented.

In March 1992 a new Constitution was launched. In the subsequent legislative elections the Congolese Labor Party was defeated by the Pan-African Union for Social Democracy, which also won those for the formation of the Senate and still the presidential ones, leading to the charge its leader P. Lissouba, who thus passed both the President-in-office Sassou-Nguesso who the aspirant B. Kolelas, leader of the “Congolese Movement for Democracy and Integral Development”. 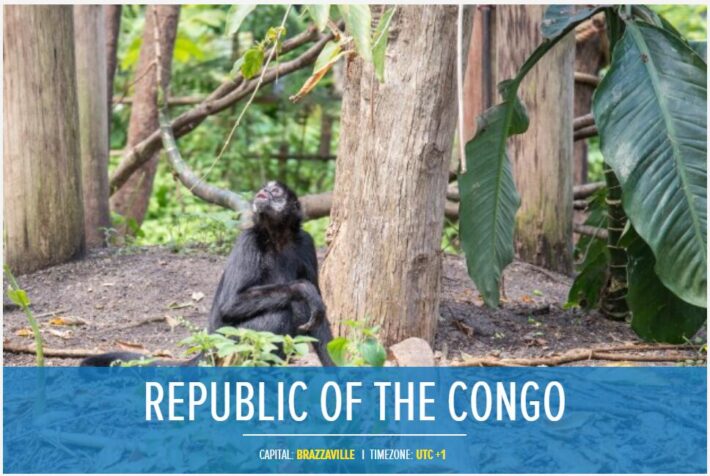 Lissouba tried to form a coalition government by joining the former single party, but instead wanted to align itself with the Union for Democratic Renewal, so that new elections had to be called for 1993. But as the leaders of the two parties ran a campaign of civil disobedience, a transitional government had to be established. Elections took place in May 1993, but were canceled following allegations of fraud. They were repeated in October.

All these episodes caused a great upheaval in the country with armed guerrilla warfare, union struggles and student protests. Only in 1996 the various conflicts were quelled and Lissouba was able to prepare new elections for 1997. And for these elections he returned to his home to stand as Sassou-Nguesso.

Brazzaville, divided into three sectors, and each of which in the hands of a faction, headed by Sassou-Nguesso, Lissouba and Kolelas, was the scene of urban guerrilla war for 5 months.

Armed forces from neighboring states, such as Angola and Gabon, also intervened, and in the end Sassou-Nguesso prevailed; took power but the guerrilla war did not end and government troops still in the first half of 1999 were engaged in the conflict.