Rwanda’s constitution provides for religious freedom, which is usually respected by the authorities. Members of Jehovah’s Witnesses are sometimes said to be subject to harassment because, among other things, they do not want to participate in civil defense exercises.

About two-thirds of Rwandans are Christians. Most are Catholics, but there are also various Protestant communities. About one-fifth of the population is believed to practice traditional African religions.

In a few countries, the church has had as strong a grip on the population as in Rwanda, but trust in the church had severe consequences during the 1994 genocide (see Modern History). Many priests, monks and nuns from the Hutu people actively participated in the Tutsis massacres and were later convicted for this.

The church’s role in the genocide for a few years led to extensive conversion to Islam, partly because Muslims often actively protected persecuted Tutsis. However, estimates of the proportion of Muslims vary widely between sources, from a few percent to as much as 15 percent. 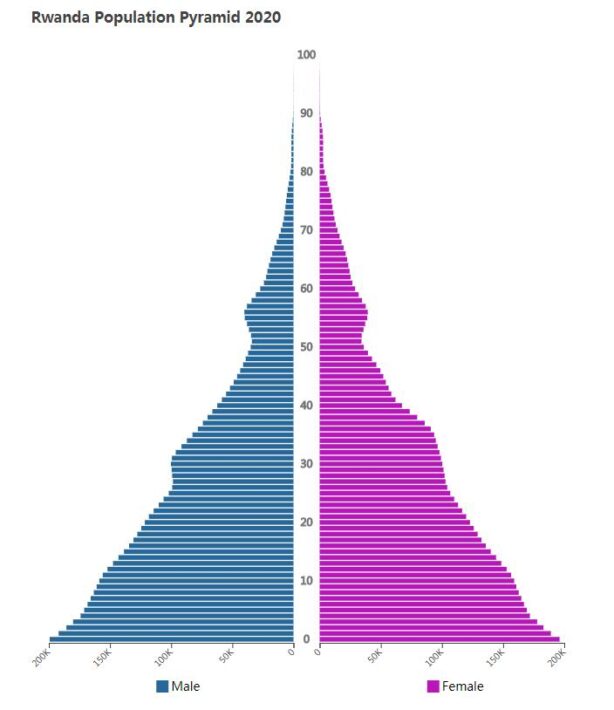 Kabuga should be tried in Arusha

Felicia Kabuga will be tried in Arusha, Tanzania, where the judicial body of the International Criminal Tribunal (MICT) has a department (see Democracy and Rights). Kabuga is charged with, among other things, genocide and crimes against humanity in Rwanda in 1994.

Called for the genocide arrested

Felicia Kabuga, one of the last internationally wanted suspects of the 1994 genocide, is arrested by police in a suburb of the French capital Paris. Kabuga was one of Rwanda’s richest people at the time of the genocide. He is suspected of having used his money and influence to finance the infamous hutumilism Interahamwe, which carried out massacres, mainly Tutsis. Kabuga also helped build the Radio-Television Libre des Mille Collines, which was called Hutus to commit Tutsis murders. Kabuga has been on the run since 1994 in Germany, Belgium, Congo-Kinshasa, Kenya and Switzerland. In the suburb of Paris he lived for three, four years. Kabuga is 84 years old at the arrest and has been hidden under false identity with the help of his children. In 1997 he was called for by the UN Court of Rwanda, among othersgenocide. The Court closed down in 2015.

Rwanda eases the restrictions imposed on society to protect the residents of the corona virus. The Rwandans are now allowed to move freely from five in the morning until eight in the evening. Business, manufacturing and construction can be resumed but with the lowest possible workforce. The grocery store may open again but only half as many sellers as usual may be in a market. Hotels and restaurants are allowed to resume operations, but they must close by 19 o’clock in the evening. Sports arenas continue to be closed. At funerals, and in schools, churches, gyms and bars, a maximum of 30 people can gather. Transport between the country’s provinces is still prohibited and the country’s borders are kept closed. Face mask must be worn in public place around the clock.

FDLR is charged with mass murder

The Rwandan government and Huturebel FDLR are blaming each other for the murders of twelve park guards and five other civilians in Virunga National Park, which is spreading in the border area between Rwanda, Uganda and Congo-Kinshasa. The murders took place on Congolese land but FDLR says Rwandan soldiers patrol the site of the murders. This is denied by the Rwandan government who says the attack was carried out by the Hutur bells. The management of Virunga National Park states for media that they have evidence that the assault was made by FDLR. In the last 20 years, 176 park guards have been killed in Virunga.

Support money from the IMF

The IMF contributes $ 109.4 million to Rwanda to strengthen the country in the fight against the corona pandemic.

The boundaries are closed

Rwanda closes all border crossings for people, unless goods are allowed to pass. All flights to the country are stopped and all bars are closed. Residents are prohibited from leaving their homes unnecessarily in an attempt to slow down the spread of the corona virus. Necessary matters outside the home are, for example, visits to health clinics, banks and in grocery stores.

Rwanda closes schools, churches and mosques and bans concerts and other entertainment and sports events that lead to larger crowds. The measures are an attempt to slow the spread of the new corona virus, which has caused a pandemic. The national airline RwandAir cancels its flights to a number of countries. The government also decides on a price control with fixed prices for goods in order to avoid rapid price increases.

Kizito Mihigo, a Rwandan singer whose music has been banned by the Kagame government, commits suicide in police custody. The singer was arrested three days earlier when he tried to leave the country. Mihigo was a tutor and survived the 1994 genocide. However, he fell out of favor when he questioned the Kagame government’s exclusive right to describe the genocide. Mihigo was sentenced in 2015 to ten years in prison for conspiracy against the government, but he was pardoned in 2018.

Rwanda and Uganda agree on a prisoner exchange. This happens after a meeting between Presidents Yoweri Museveni and Paul Kagame in Angola’s capital Luanda. It is one of the first advances reported since the countries last summer (see August 2019) agreed to try to reduce tensions between them. However, nothing is said about how many prisoners it is about and when the exchange is to take place. A new meeting between Kagame and Museveni will be held on February 21.