The Sierra Leone peninsula was sold in 1788 by an indigenous king to England, and then immediately became an English colony and protectorate. The sale had been made with a very specific purpose, that of giving refuge to homeless Africans and freed slaves.

As a British Crown colony, it had a governor in charge of appointing an executive council assisted by a legislative council. English law applied with the changes required by the environmental situation. According to Abbreviationfinder, an acronym site which also features history of Sierra Leone, the colony was divided into two provinces each chaired by a European commissioner. Each commissioner was given the task of settling all matters of a certain importance, leaving those of lesser weight to the indigenous leaders, owners of specific courts.

Colonization began and, after a series of failures, in 1791 a company was formed which in 1807 ceded all rights to the English Crown. In 1872 the Falaba region also passed under English protectorate.

In 1898 there was a rebellion of the natives against the British, but also against the Europeanized Africans; it was tamed and everything came under control.

In 1904 the Los islands were ceded to France. The development of exploration led to the discovery of some deposits of platinum, hematite and gold in 1926, and exploitation began immediately. The area of ​​the internal plateaus was the richest in minerals, especially diamonds.

At the end of the Second World War, Great Britain began a policy of preparation for autonomy in all its African colonies and did so in stages in 1946, 1951 and 1956. The intent was to form separate states but always Commonwealth members. This also happened in Sierra Leone and in 1958 an “Order of the Council” was formed which led the Executive Council to be formed entirely of Africans (1 prime minister and 7 ministers).

The Assembly of Representatives was formed with 51 elected members plus 2 appointed by the governor. Slowly many disputes previously submitted to the judgment of the governor, passed into the hands of the indigenous district commissioners, and this to get used to the Africans in the meantime to take on the administrative responsibilities, which would then be followed by the political ones.

On March 16, 1961, the British Prime Minister welcomed Sierra Leone to the Commonwealth as an independent member, starting on the following April 27. In October of the same year, the United Nations also promoted the admission of Sierra Leone.

The government of the young state was, at the time of its independence, governed by a coalition, “United Front”, chaired by the conservative M. Margai, exponent of the “Sierra Leone People’s Party”: governor general as representative of the British Crown, and therefore Head of state was the African H. Lightfoot-Boston, while the opposition was at the head of S. Stevens, head of the “All People’s Congress”.

In 1964 after Margai’s death, the government passed into the hands of his brother Albert with disastrous results, as he applied a totalitarian and inefficient regime, and this made the opposition party rise. And in the March 1967 elections, the ruling party lost the majority and while Stevens was preparing to take power, a military coup sponsored by D. Lansana occurred. The parties were abolished, the Constitution was suspended; the result was the “National Reformer Council” headed by Colonel TA Juxson-Smith, who took office with the promise to restore civilian government in a short time. As this had not yet occurred in 1968, another military command intervened and put Stevens in a position to form the government. Then the “Sierra Leone People’s Party” passed to the opposition.

Contrasts, unrest, tribal antagonisms and regress in the economy were the components for declaring the state of emergency, which began in November 1968 and closed in February 1969. In 1970 the difficulties returned, another opposition party was formed, the ” Union Democratic Party ”which was short-lived and then again returned to a state of emergency.

Stevens’ party took part in the elections of May 1973 as a single party. A change was brought to the Constitution, whereby the position of Koroma was divided into two parts: that of vice-president and that of prime minister, and he retained the first in order to eventually eventually succeed the president. However, he also held the Finance Department. Prime Minister became CA Kamara.

The 1977 elections were won by the All People ‘Congress and in March 1978 it was declared a single party, under whose wing members of other sectors also came under the government of national unity.

For foreign policy, in the late 1970s, Sierra Leone, after abandoning its pro-western ideology, forged relations of friendship and cooperation with the communist countries. First of all, popular China which committed itself to building public works and giving aid; then Libya which became the main oil supplier and Liberia.

But years of instability and unrest occurred. In 1981 it was again necessary to resort to the state of emergency which lasted until 1985, when Stevens resigned. (He died in 1989). In withdrawing from politics he, disregarding the vice-president’s expectations, appointed General JS Momoh as his successor, who was elected president in October 1985 by universal suffrage and took office in November. Although military, he formed a government entirely of civilians.

In 1987 there was an attempted coup by Vice-President F. Minah, who was sentenced to death.

In 1991 multipartism was introduced. On April 30, 1992 still a coup d’etat of young officers was elaborated by the captain VEM Strasser. Power was taken over by a Supreme State Council and a Council of Secretaries of State, mixed between civilians and military personnel. Strasser in 1993, forming the new government, promised a return to democracy within three years.

But this did not happen because the country continued to be torn apart by violence of all kinds. Strasser had to fight against the United Revolutionary Front, which after having supported the civil war alongside the Liberian guerrillas in their country, was now disturbing political life in his home, with many criminal actions, including the looting of the diamond mines, the only real Sierra Leone’s source of wealth.

These rebels, during the first half of 1995, were dangerously advanced up to a few kilometers from the capital. Many inhabitants abandoned their homes and fled but many others suffered a real massacre.

In June 1995 the country’s armed forces, together with a number of South African mercenaries and Nigerian and Guinean military forces, launched a strong counterattack and managed to defeat the guerrillas and drive them back to the areas bordering Liberia.

At the end of that month Strasser announced the first major government initiatives. First of all, it authorized the reconstitution of the political parties that had been suppressed at the time; then he announced that presidential and legislative elections would take place in February 1996. But it was destined that he should not be able to see the completion of his actions because in January 1996 he was dismissed from an operation carried out by that part of the armed forces hostile to him. His successor, General J. Maada, despite being in a rather turbulent climate, had consultations carried out.

The legislative ones assigned the victory to the Sierra Leone People’s Party, whose leader, AT Kabbah, was elected President of the Republic.

The civilians then returned to the government but did not have an easy life. The talks undertaken with the rebels met with many contrasts; however, everyone agreed to return to normal, after the civil war had cost the country the deaths of 10,000 people and 1 million refugees. So, in Ivory Coast, in Abidijan, peace agreements were signed in November 1996, but the path to the much desired peace was not entirely peaceful. In the early months of 1997 other tensions arose; there was a coup that deposed Kabbah and installed Major JP Koroma in the government, supported by the rebels. 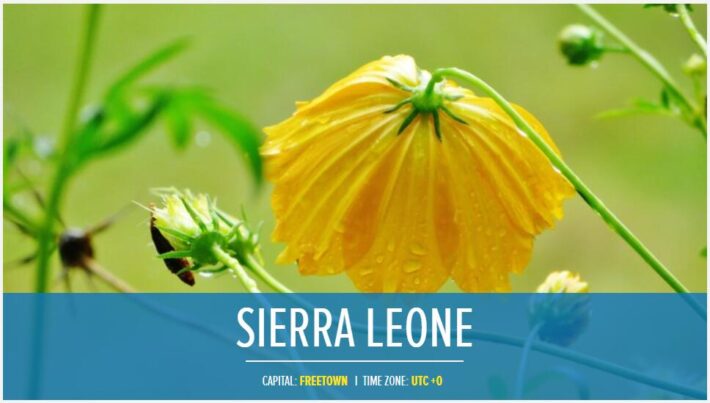 He formed a new government that was placed under constant pressure from Nigerian forces belonging to the Economic Community of West African States. The war started again; these forces, between the end of 1997 and the beginning of 1998, often bombed the airport, the port and the city of Freetown, and were preparing to launch a final deadly attack in February. And with this they ousted Koroma and resettled Kabbah to power.

But it didn’t end there. The militias loyal to Koroma, united with the forces of the United Revolutionary Front, resumed the war and during 1998 approached dangerously to the capital. They were also stained with various atrocities, such as massacres, mutilations and rapes, operated by the rebels on the defenseless populations. On July 7, 1999 in Lome, Togo, Kabbah and the rebel leader, Foday Sankoh, signed a truce. This was not respected and in May 2000 the rebels captured about 500 United Nations Blue Helmets, present in the country for a peace mission.