The vast majority of South Sudanese are Christians or supporters of indigenous, traditional religions with elements of religious belief and ancestral worship. Often the practice of religions has elements of each other. There is also a small minority of Muslims in the country.

South Sudan’s transitional constitution (see Political system) recognizes all religions and stipulates that the country should have no state religion. State and church should be separate, that is, South Sudan is a secular state.

In the 1980s, when South Sudan was still part of Sudan, the central government in the north made several attempts to introduce Islam to the south. The South’s resistance to Islamization was an engine of the civil war of 1983–2005 (see Modern History).

For Dinka and other Nilotic peoples (see Population and Languages), cattle play a central role in religion. Sacrifice rites make cattle an intermediary link between man and deity. Nearly two-thirds of South Sudanese practice indigenous traditional religions to some extent.

The first Christian congregation in the country was Coptic Orthodox and was established as early as the 300s. Nowadays Catholics are the most, but there are also Protestant communities and independent African churches. According to some sources, around 60 percent of South Sudanese count as Christians. However, the statistics of religious affiliation are uncertain. 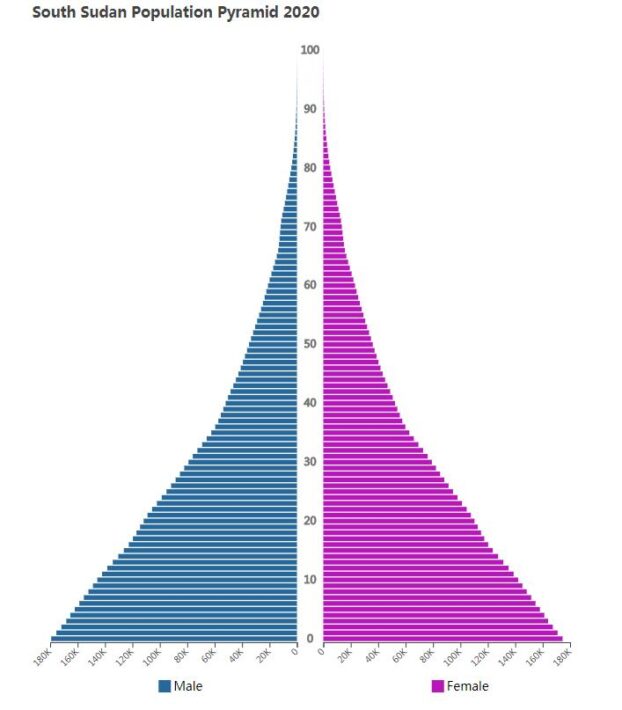 The ceasefire is broken immediately

The negotiated ceasefire comes into effect shortly after midnight on Christmas Eve, but it does not take many hours before the parties begin to accuse each other of new combat actions. A few days later, the German news agency DPA reports that at least 30 people were killed in gunfire between government forces and the opposition in the state of Bieh in the northeastern part of the country.

The parties agree to cease fire

With battles ongoing in several parts of the country, new peace talks between the government and several rebel groups in Addis Ababa in Ethiopia are initiated. The talks, organized by the regional cooperation group Igad, lead to the parties agreeing to cease fire from December 24.

Hundreds of dead in clan battles

At least 170 people are killed and hundreds injured over a week in clashes between two sub-groups of Dinka in northern South Sudan. Hundreds of houses are burnt down and upwards of 2,000 people flee their homes from the fighting. The government introduces emergency permits in three states in the north to give the military opportunities to curb violence. Battles between livestock-driven clans are common in the country, but the death toll in this case is unusually high. During the month, reports were also received of livestock grazing performed by nomadic murals against agricultural dinkas. In addition to dozens of dead, theft and kidnapping of many women and children are also reported.

More than 100 government soldiers gather outside the influential former army chief Paul Malong’s residence in Juba to disarm him and his private bodyguard. The background is information that Malong would have planned an escape from the house arrest he is in. The streets are empty when the effort is made and the situation is tense in the capital. The government fades down the event and describes it as routine. The disarmament takes place on the orders of President Kiir, who dismissed Malong in May the same year since the two leaders disagreed. According to analysts, Kiir feared the growing influence Malong gained as he, as Army Chief, recruited many Dinka soldiers from his own stronghold in Bahr el Ghazal.

Kiir urges the police to cooperate with UN forces

President Kiir orders the police force to cooperate with the UN Regional Protection Force (RPF), which is being deployed in Juba to protect civilians in the capital. In the past, the government has declared itself reluctant to bring in additional UN troops into the country. RPF will complement the UN mission Unmiss.

At least 25 people are killed when new fighting erupts in a village outside the city of Bentiu in Northern Liech, the state’s information minister said. The battle for the village stands between government forces and the rebel force SPLA-IO, which is loyal to Riek Machar. A representative of the SPLA-IO confirms the information and adds that their attack was successful, that the rebels captured the village and that 19 of the killed were government soldiers. However, Northern Liech’s Minister of Information says that most of the dead are civilians. The domination of Bentiu has constantly alternated between the two warring parties since the outbreak of the war in 2013. The area is rich in oil and thus important to gain control over.

The United States is sanctioning another three high-ranking people in South Sudan, which means that US citizens are not allowed to do business with them and that assets they have under US jurisdiction can be frozen. The three persons are Information Minister Michael Makuei, who is accused of having been involved in or overlooked with attacks against the UN mission in South Sudan, former army chief Paul Malong and high-ranking military SPLA leader Malek Reuben.

Parliament adopts an ambitious state budget for 2017/2018 despite the fact that around one third of expenditure is not funded; The $ 300 million budget is 50 percent greater than that of 2016/2017. About 40 percent of the budget is earmarked for the security sector, ie the military and security forces. In the country there is a widespread lack of food and fuel and public servants as teachers and health care workers sometimes have to wait months for their salaries.

The government takes a rebel seat

Government forces occupy the city of Pagak near the border with Ethiopia, which has long been the headquarters of rebel forces loyal to former Vice President Riek Machar. The rebels flee the city but promise to return it soon.

About 10 judges are dismissed

The government dismisses about 10 judges who have been on strike since May of that year. More than 270 judges then quit their job in protest against the government refusing to dismiss the country’s highest judge, which the strikers say does not listen to their demands for better working conditions and higher wages.

Offensive against rebel stronghold in Pagak

Government forces launch an offensive against the Machar faithful rebels’ stronghold in the city of Pagak in the Upper Nile state of the north. David Shearer, head of the UN mission Unmiss, testifies about “fierce fighting” north of Pagak with at least 5,000 civilians fleeing into Ethiopia and nearly 30 relief workers who have had to be evacuated from the area.

According to the UN, there is technically no longer a famine in South Sudan. The definition of famine (famine) has to do with how acute malnutrition is, the number of deaths due to starvation and the availability of food. However, about six million South Sudanese still suffer from food shortages, compared with 4.9 million in February when the UN declared famine in the country.

UN: over one million children on the run

President Kiir dismisses South Sudan’s influential and hard-line army chief Paul Malong, who has received internal criticism within the army for making decisions that only favor his own ethnic group of Dinka and discriminate against non-Dinka. In February 2017, a number of high-ranking military members in the army demanded resignation after accusing Malong of “waging ethnic war” against non-thinkers and of ruling through “an unqualified clique of friends and relatives”. However, a spokesman for the government says the change of army chief is routine as Malong has been in the post for three years. He is replaced by General James Ajongo Mawut.

The government raises the registration fee for foreign NGOs operating in the country, from $ 600 to $ 3,500, according to a state official. Critics accuse the government of profiting from the famine suffered by the population.

The first soldiers of the regional UN-sanctioned peace force arrive in Juba. The remaining 4,000 troops are expected in July of that year. There have already been around 12,000 peacekeeping soldiers in the country.

Rebels from South Sudan take 16 UN staff hostage in Munigi in eastern Congo-Kinshasa. Munigi is a camp for former rebels who have fled South Sudan. For several months, the Rebels have asked for the camp to be relocated. The UN has said that it has not been possible to find countries that can accept the refugees. The hostage is released after a day.

Britain accuses South Sudan of committing genocide during the civil war in 2013. Government executions were targeted at certain ethnic groups and can thus be referred to as genocide, says Priti Patel, British Minister for International Development, after visiting South Sudan. The South Sudanese Minister of Information says Patel’s comment is “unfortunate and misleading”. Genocide is the most serious crime in international law.

Civilian victim in fighting in Wau

At least 16 civilians are killed and at least ten injured when fighting erupts in the town of Wau between government soldiers and rebels loyal to Machar. The fighting erupts after an army column is ambushed.

According to the UN, the government in Juba continues to buy weapons for oil revenues, despite the country suffering severe famine. According to the World Organization report, at least half of the state budget goes to arms procurement. South Sudan’s Minister of Information protests against UN tasks.

The UN warns of humanitarian disaster

the 13th of March

The UN warns that the world is facing the worst humanitarian catastrophe since 1945 and seeks to endanger the famine and famine of over 20 million people in Yemen, Somalia, South Sudan and Nigeria. The organization says 1.4 million children in the region may die of starvation before the end of 2017. The United Nations appeals for $ 4.4 billion before July. In South Sudan, as many as 4.9 million people are threatened by an uncertain supply of food (ie 40 percent of the population needs food and nutritional supplements) and around 1.1 million are at risk of famine.

The Japanese government announces that it is withdrawing its 350 servicemen from the UN peacekeeping force in South Sudan.

UN Refugee Agency UNHCR states to media that tens of thousands of South Sudanese are expected to flee the famine to camps in Sudan. Since the outbreak of the war in 2013, nearly 330,000 South Sudanese have already taken refuge in neighboring countries in the north.

The government and the UN warn that 100,000 people are starving in the country and that another million people are at risk of suffering. The famine is most widespread in the state of Unity. The civil war and the economic crisis are said to be the causes of the problems. The UN calls for urgent humanitarian aid.

A spokesman for the South Sudanese Foreign Ministry says that South Sudan has changed and no longer accepts that Unmiss is strengthened by 4,000 men. According to the spokesman, the government can guarantee the security of the country without strengthening the UN force.