Christianity and Islam are the two largest religions in Tanzania. The data on how large proportions of the population are Christian and Muslim vary. There are sometimes strong tensions between the two groups.

An estimated 30 to 40 percent of Tanzanians are Christian and about as many are Muslims. The country also has supporters of traditional, indigenous religions as well as some Hindus and Buddhists, mainly within the Asian minorities. In addition, there are adherents of the Bahai religion.

Catholics are the largest Christian group. Most Protestants are Lutherans, but there are also Anglicans, Pentecostals, Baptists and others. The Christian communities have their roots in the German colonial period in the early 1900s, when missionaries were active in the area. A Swedish mission has also had a long time working in Tanzania.

Between 80 and 90 percent of Muslims belong to the main direction of Islam Sunni. In Zanzibar, there have been Muslims since the 6th century, and there are almost all Muslims there. Even along the mainland coast, and in Dar es Salaam, Islam is the greatest religion.

Essentially, Christians and Muslims live together peacefully and marriage across religious boundaries is common. However, since the 1990s tensions have arisen between Christians and Muslims, mainly due to a political conflict between Zanzibar and the mainland (see Modern History). The Muslim-dominated political opposition on the island has long been dominated by the mainland central government, which consists mainly of Christian politicians.

Tanzania’s Muslims often have lower education and more difficult careers than Christians. An important reason for this is that the country’s best schools are often founded and run by Christian missions. Muslims who feel marginalized in society have been susceptible to propaganda from Islamist groups. In Dar es Salaam, Islamists have taken over mosques and accused moderate Muslim leaders of serving the “unfaithful” government. There has been street violence between Muslims and Christians.

Essentially, however, radical Islamism in Tanzania has its roots in Zanzibar. One example is the Uamsho movement, which wants to make the island an independent, Islamic state (see Political system). Zanzibar Islamists have received support from, among others, Saudi Arabia, which has funded Muslim schools on the island. The government of Tanzania has used anti-terror and press legislation to close Muslim schools and Muslim media. In Zanzibar, special Muslim courts are allowed for family law. 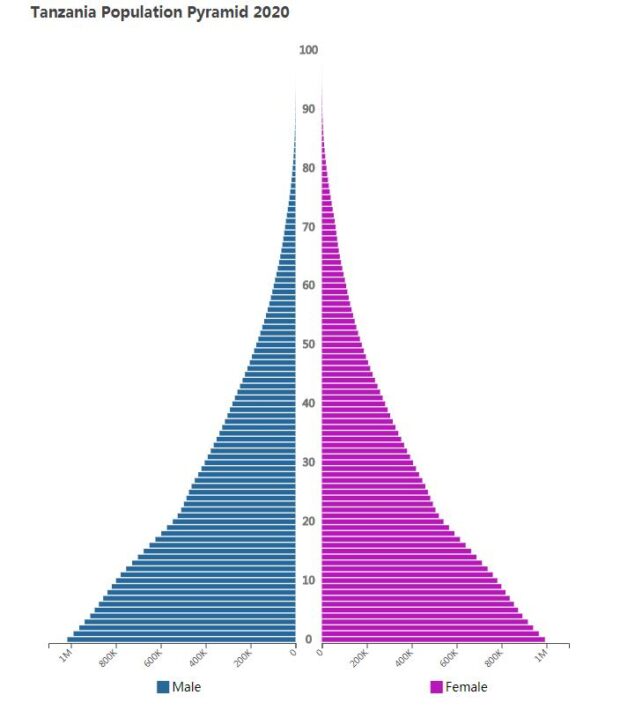 Tanzania is one of the most populous countries in Africa. Despite compulsory schooling, the illiteracy rate is over 30%. Almost half of Tanzanians are younger than 15 years.

The unemployment was the mid-nineties at 40%. The salaries of the employees were mostly too low for a family to make a living. Many Tanzanians are dependent on secondary occupations such as street sales.

Traditional indigenous beliefs remain with many Tanzanians, including Christians and Muslims. Especially widespread is the belief in the spirit being – often the spirits of the ancestors – and that these can bring help and support or illness and accident. Natural phenomena, such as thunder, are considered divine manifestations. Belief in magic is also common. Although it has been banned since the colonial era, black magic and witchcraft are still practiced.

Traditional medicine men were banned from working in 2009 after a series of murders of albinos whose body parts are considered to possess magical powers. The police have seized hundreds of medical men who, despite the ban, have continued their operations.

President Magufuli follows his own injunction and celebrates Independence Day by clearing the street outside his office from rubbish (see November 2015).

John Magufuli from CCM is installed at the presidential post and Samia Suluhu Hassan becomes Tanzania’s first female vice president. The new prime minister appoints Kassim Majaliwa as prime minister. The Zanzibar government decides that the archipelago’s incumbent president Ali Mohamed Shein should remain in office until a new president is elected in a new election.

President Magufuli is launching an ambitious campaign against unnecessary government spending. He bans government officials from flying first class (the president, vice president and prime minister are exempted), orders that government meetings should not be held at expensive hotels. Magufuli reduces a delegation to travel to other countries in the Commonwealth, from 50 to 4 people. He suspends the celebration of Tanzania’s independence in December on the grounds that it is shameful to spend large sums on celebrations when the country is affected by a cholera outbreak. Instead, Independence Day should be celebrated by the Tanzanians cleaning streets and squares as a way to prevent cholera. Magafuli drastically reduces the budget for the official dinner held at the opening of the European Parliament. The money should instead go to health care and road construction. The president also goes to the administration to check on the spot that the civil servants are really in their offices and work. The measures give Magufuli the nickname “Mr. Bulldozer” and strengthen his popularity.

Reigning CCM candidate John Magufuli wins the presidential election with 58 percent of the vote against 40 percent of opposition Ukawa candidate Edward Lowassa. In the elections to the European Parliament, CCM wins big with 253 out of 366 seats. The second largest party will be Chadema with 70 seats. Trea comes to CUF with 41 seats. ACT and NCCR-Mageuzi each receive 1 mandate. The opposition is accusing CCM of electoral fraud and if rationing the election result. Election observers from the EU and the Commonwealth report that the election day was largely calm, with the exception of Zanzibar. EU observers point out that state media should have given more room to the opposition.

The election on Zanzibar is annulled

The election of Zanzibar president and parliament is annulled due to a number of irregularities. Among other things, young people should have invaded several polling stations, cheating with ballot papers should have occurred and election officials should have ended up in a fight. The Election Commission states that the elections in Zanzibar have not been free and fair. When and if the Zanzibar election is to be redone is unclear. National opposition alliance Ukawa’s presidential candidate Lowassa says that the whole election (also on the mainland) should be redone because of the events in Zanzibar. The Election Commission rejects his claim.

CCM’s presidential candidate Magufuli promises during the election campaign that he as president will solve the problem of the severe electricity shortage, among other things by speeding up natural gas extraction. Magufuli also promises more jobs, tougher anti-corruption and increased industrialization. Opposition Alliance Ukawa’s candidate Lowassa mainly emphasizes the fight against poverty. Other important choice issues are better education and health care and increased access to clean water.

Lowassa becomes the candidate of the opposition

The four opposition parties Chadema, CUF, NLD and NCCR join forces in an election federation called the Coalition for the Defense of the Constitution (Ukawa) and appoint Edward Lowassa as his candidate in the October presidential election.

CCM’s election of Magufuli as presidential candidate means that pre-drafted Edward Lowassa is being maneuvered. He therefore chooses to move to the opposition party Chadema. Lowassa, who was forced to resign as prime minister following a corruption scandal in 2008, is a successful financier, sometimes called Africa’s Donald Trump.

Governing CCM elects Labor Minister John Magufuli as its presidential candidate in the fall election. Magufuli appoints a woman, Samia Hassan Suluhu from Zanzibar, as Vice Presidential candidate. Magufuli has not been involved in any of the scandals that have shaken the government and he has a reputation for being a good administrator. As a politician, he has kept a relatively low profile.

Two former finance ministers are sentenced to three years in prison each for causing the state a large loss of income. The ministers are condemned for allowing a British company to bypass tax rules.

Tanzania and 25 other countries agree on a new Tripartite Free Trade Area, which covers most of Africa, from Egypt in the north to South Africa in the south. However, before the agreement can come into force, further negotiations are needed and the agreement is approved by the parliaments of the countries.

Elections will be held in October

The government announces presidential and parliamentary elections until October 25, 2015.

The EU resumes its budget support for Tanzania. The support was suspended after a corruption scandal in November 2014. The EU now finds that the government and other institutions have done enough to investigate this.

The referendum is pushed forward

The referendum on a new constitution scheduled for April 2015 is postponed by the Election Commission, which estimates that more time is needed to update the voting lengths. No new date for the referendum is indicated.

Parliament adopts a new law that will make it more difficult to hire foreign staff. The law is a result of popular dissatisfaction with the growing number of Chinese guest workers. Critics believe the law will strike against unskilled labor from Zambia and Kenya rather than against the Chinese.

Death sentence for murder of woman with albinism

Four people sentenced to death for murder of a woman with albinism. More than 200 “witch doctors” are arrested at police raids around the country (see January 2015). The raids are to be extended to the entire country, says police.

The Minister of Energy is forced to resign

The Minister of Energy becomes the third member of government to be forced out due to widespread corruption in the energy sector (see November 2014).

CUF leaders are seized upon manifestation

Ibrahim Lipumba, leader of the opposition party CUF, is arrested along with some 30 other people trying to carry out a manifesto on the 14th anniversary of the clashes in Zanzibar after the parliamentary elections in 2000, when over 20 CUF members were shot dead by police in a demonstration against alleged cheating (see Modern History).

The government stops the publication of the Kenya-based regional newspaper The East African in the country. The reason is that the magazine is perceived to have a “negative agenda” regarding Tanzania.

The government bans “witch doctors” and launches an information campaign to curb the increased number of albino murders. According to the UN, 74 albinos have been killed in Tanzania since 2000. Another 30 or so people have had body parts cut off but survived. Albino children have been placed in orphanages in an attempt to protect them from people who rob them and kill them to sell their body parts to people who believe they have magical properties and are successful. The witch doctors are considered to have a central role in the business.