In order to contain the respiratory disease caused by the coronavirus SARS-CoV-2 virus infection, there has been a general entry and exit ban for all citizens for an indefinite period of time. All passenger air traffic was also discontinued. Since July 31 Uganda was removed from the list of risk countries by the German Robert Koch Institute. On October 1st, the airport in Entebbe reopened for passenger traffic, albeit with restrictions. A negative corona test, which must not be older than 72 hours, is required for entry. Tourists are allowed to re-enter, but they must immediately go to designated hotels and the tour operator must prove that there is no direct contact with the local population.

The Federal Foreign Office has information on the country’s entry requirements ready. You can obtain information about your visa from the Ugandan Embassy in Berlin. Since August 2016, all travelers to Uganda have to apply for a so-called e-Visa online before traveling and pay for it online. The documents required for this, such as the passport, proof of yellow fever vaccination, passport photo, some travel history, etc., must be sent as a file to the Immigration Department in Uganda. After checking the documents, the applicant will receive a confirmation so that the visa can be issued at the Ugandan border. Thus, the Ugandan government also has the opportunity to identify undesirable persons and react accordingly. The costs for the single-entry visa were reduced from USD 100 to USD 50 in July 2016, while the costs for multiple entries and the so-called EAC visa, which entitles the holder to enter Kenya and Rwanda at the same time, remain at 100 USD. The Ugandan Ministry of Internal Affairs has information on entering and staying in Uganda. It is also worth taking a look at the website of the German Embassy in Kampala.

There is a large selection of guest houses and hotels in Kampala, but also houses and apartments for rent. Commercial zones are currently being developed in Uganda; in Kampala, the districts of Kololo and Nakasero, among others, are affected; this will have an impact on house prices. You will also find what you are looking for in the larger and medium-sized cities. The power supply is irregular, the mains voltage is 240 volts. Most of the everyday goods can be found in the capital and much in the other cities of the country. The cost of living are very different depending on personal needs. While many Ugandans have to get by on one USD per day, there are definitely opportunities to spend a lot of money, especially in Kampala.

According to militarynous, the Ugandan cuisine offers some delicacies. Depending on the region and landscape, different foods are grown and prepared. In central Uganda, the typical dish is matooke, a solid porridge made from plantains that is usually steamed in banana leaves. Posho, a solid porridge made from cornmeal, is becoming more and more popular. Millet is mainly grown in Eastern Uganda, so the main course “Atapa” is made from it and from manioc, known as cassava in Uganda. Sweet potatoes are also very common in eastern Uganda. Chapatis and samosas, with meat or vegetarian, are often sold on the streets.

Traditionally in Uganda no oil is used for the preparation of vegetables and often meat, but in the south the sauce is made from peanuts and in the north from sesame. A dish of the Karimajong and other nomads certainly takes some getting used to, they prefer blood, sometimes mixed with milk.

As a drink in rural areas, millet beer, which is called differently depending on the region, e.g. Malwa in the south of the country, or Ajono in Teso, is often drunk from long straws. Waragi, available as gin in bottles or plastic bags, is also very popular. In many places, however, the alcohol is self-distilled and is not always harmless.

But Uganda also has several beer breweries, soft drinks are also produced in the country and are available everywhere. The families in rural regions still often make fresh juices from passion fruit or oranges.

Although Uganda is a coffee-growing region, but as a coffee drinker you have already in good hotels or coffee shops going to get a coffee, which is not transparent and was prepared from instant coffee powder.

Due to the COVID 19 pandemic, all traffic in Uganda was paralyzed until the end of May. Since June 22nd, car journeys with a maximum of four people have been permitted again. Buses have been running again since June 4th, but are only allowed to occupy half of the spaces.

In general, Uganda’s transport options are diverse, intercity buses offer quick connections to larger cities and neighboring countries. The Matatus, minibuses for 14 people, serve the routes throughout the country but also destinations within the larger cities. Most of the time they are traveling too fast, not always in good condition, often overloaded and therefore very prone to accidents. Both vehicles and roads are often defective and pedestrians, animals and objects on the road can often not be calculated. What we mean by taxi is called Special Hire in Uganda, and the price should be negotiated before driving. Uber taxis have been around in Kampala for several years with fixed prices and bookable via app. The so-called “Boda-Bodas” motorcycle taxis are everywhere. Especially in the congested Kampala, they meander through the traffic and try to get the customers to their destination, taking into account the high risk of accidents. The so-called Safe Bodas are a little safer, helmets are available for the driver and passenger, the taxis are registered and the drivers have received first aid training. Since December 2015 there is again a short railway line from Kampala to Namanve for passenger traffic. Otherwise, only a few freight trains run between Kampala and Kenya.

Traffic in Kampala is a challenge for both self-drivers and public transport participants. The traffic jam can result in delays of hours. When choosing an apartment, you should be careful not to live too far away from your workplace. 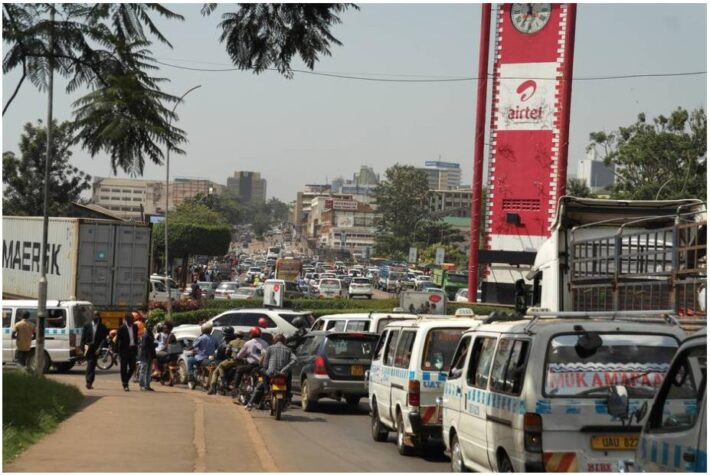