Uganda is home to the largest tropical inland lake, which is also the second largest freshwater lake in the world, Lake Victoria. The English adventurer and Africa explorer Speke was the first European to discover it in the century before last and named it “Lake Victoria” in honor of his Queen. But the lake is now an ecological problem child. The water hyacinths, originally found in South America, spread in Uganda’s waters. They deprive the fish of oxygen, impede navigation and clog the lake’s drains. The international foundation for the environment and Global Nature wants to draw attention to the dramatic decline in fish, the destruction of the bank vegetation and the growing impoverishment of the people living on the lake. The organization even named Lake Victoria as Threatened Lake of the Year 2005. The water level fell over the years, with the consequences affecting fisheries and energy production at the power stations on the Nile. Critics suspected that Uganda secretly dumped too much water from Lake Victoria into the White Nile to meet the country’s energy needs.

Since January 2019 it has rained far too much in East Africa. The more than twenty tributaries of Lake Victoria brought vast amounts of water into the lake. Marshes and wetlands on the lake were eroded and broke off, creating floating islands. Some got into the power plants and clogged the turbines. Power outages across the country were probably the least of the problems. Due to the blocked drain into the Nile, the water level of the lake rose to over 13.5 m above the normal level. Fishing villages and entire islands were flooded, people were killed, roads were flooded, and even the runway of the airport in Entebbe was in danger of flooding. Hotels and resorts lost their beaches, some even their buildings in the masses of water. Uganda’s animals also suffer from the masses of water. Ngamba Island, which is a safe home for many orphaned or rescued chimpanzees, has been partially flooded. However, the water masses are now falling, so that it was possible to reopen on October 1st, 2020.

Drought or flood in East Africa

According to aristmarketing, the Ugandan government seeks international cooperation in the fight against the consequences of climate change. There are also multiple efforts at the national level. In 2019, the 24-year-old national environmental law was revised. A change was necessary in view of the massive infrastructure projects in the energy sector such as the planned refinery and the pipeline for the upcoming oil production, the increasing urbanization and the resulting land pressure as well as climate change.

In Kampala, more and more unplanned settlements are being built in wetlands, the city administration is trying to build sewer ditches in order to maintain a minimum of hygiene, but also to maintain the wetlands and to educate the population about the effects of climate change. Kampala is even intended to serve as a model for other African countries. One strategy is the production of briquettes from waste products in order to reduce the consumption of charcoal as fuel, the introduction of street lights with solar power, school kitchens with biogas and much more

Disasters occur again and again. In mid-2011 all of East Africa, including Uganda, ruled, the worst drought in 60 years, affecting almost 12 million people. In Uganda, the east and north were particularly hard hit, especially the Karamoja region, which was already troubled by unrest. In 2016, the whole of East Africa was hit again by the worldwide “El Niño” phenomenon. It led to extreme weather conditions, the second rainy season was almost completely canceled in Uganda, and prices rose. According to the government’s crisis report, around eleven million people were affected by the crisis at the beginning of 2017. After the rains in the middle of the year, the situation eased somewhat.

Dry years have been followed by wet years, as has been the case since the second half of 2019. This is a great help for some farmers, but the rain came at the wrong time and often caused more damage than good. Several landslides destroyed houses, fields and resulted in deaths. Especially in the otherwise very dry regions of the country, such as Karamoja, new problems were created, roads were barely passable and prices rose. As with every flood, cases of malaria and cholera increased.

In an unprecedented manner, excessive rainfall hit Uganda in the first half of 2020. In May 2020, rivers overflowed their banks, resulting in flooding. Western Uganda was hit particularly hard. Over 100,000 people lost their homes, Kilembe Hospital was destroyed, people drowned. But also in eastern Uganda there were catastrophic conditions. Access from Mbale to Karamoja via Sironko had to be closed after the bridge was washed away. In the Mount Elgon area, the bridges could not withstand the water and were destroyed.

The environmental movement in Uganda has been rather inconspicuous since then. But when Lake Victoria burst its banks not far from her parents’ house, 23 year old Vanessa Nakate decided to take action and founded Fridays for Future Uganda. She gained notoriety after her photo, which she shows in a group picture at the World Economic Forum in Davos, was subsequently cut out. She chalked this as a form of racism and then received a lot of encouragement, especially in social media. 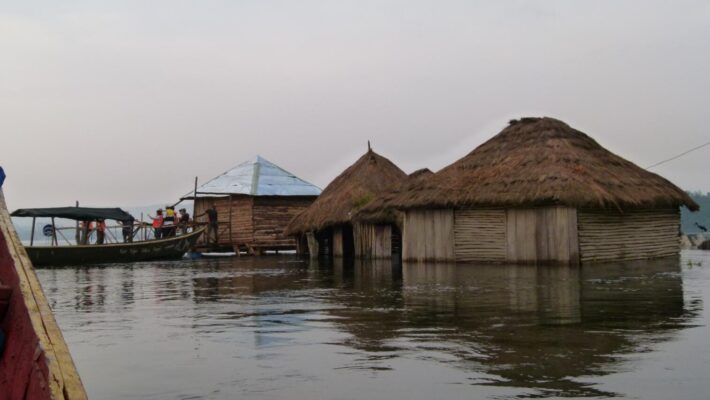