In the years after independence, Uganda was one of the most industrially developed countries in East Africa. Internal armed conflicts as well as economic and economic mismanagement have destroyed this development. However, since the beginning of the 1990’s Uganda has been able to achieve a significant improvement in the economic and social situation and also in the number of employees, even if they are still poorly paid in many cases. Close coordination with the World Bank and the International Monetary Fund (IMF) contributed significantly to this. The poverty rate was reduced considerably (1992: 56%; 2000: 35%, 24.5% in 2009/10 and 19.7% in 2012/13). Unfortunately, an increase to 21.4% was recorded again in 2017. Investors from home and abroad are welcome, the government and the World Bank offer background information and concrete support.

Once again, Uganda has proven itself to be the most successful business nation worldwide. After all, 28.1% of the population are active as entrepreneurs – for comparison: in Italy it is only 1.3% according to the report by Global Enterpreneurship Monitor. The reasons for this lie in the young and predominantly rural population in Uganda, which has little chance of finding a job. According to ehistorylib, many start small businesses in the informal sector. A good 400,000 Ugandans work as motorcycle taxi entrepreneurs, others as traders, hairdressers in tourism, etc.

The characterization of the Ugandan economy and the description of the factors hindering development do not differ much from those of other countries in Sub-Saharan Africa and prove that Uganda is still one of the poorest countries in the world. Despite average growth rates of around 4.5% in recent years, there is still indescribable poverty in the countryside. It is only thanks to the fertility of the country that there are no major famines such as in Ethiopia. Urbanization has increased rapidly in recent years, but at 25% it is still relatively low. The last few years have been characterized by drought, crop failures and unrest after the elections. This also influenced the inflation rate which rose to over 25%, but leveled off again to below 4% and thus reached the lowest value of the EAC. Uganda’s central bank, the Bank of Uganda, was founded in 1966 and is responsible for monetary policy and maintaining price stability. It carries out all of its activities in close cooperation with the Ministry of Finance.

The Uganda Bureau of Statistics provides statistics on the various economic sectors. On the interactive pages of Trading Economics you can research economic data on all relevant topics. 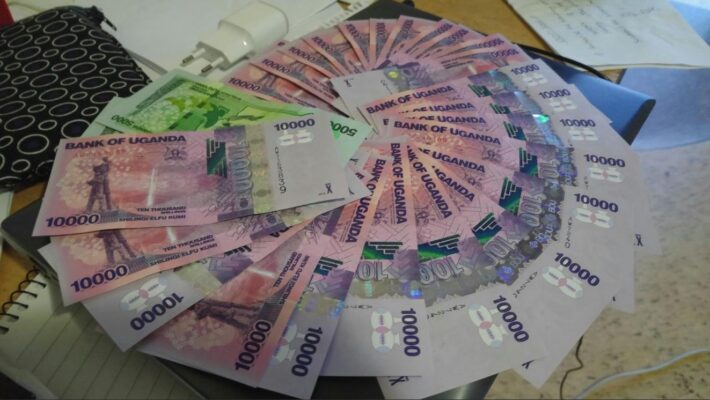 According to the World Factbook, around 72% of the population work in the agricultural sector, for others subsistence agriculture is an extra income to be able to earn a living with the mostly low wages. Agriculture is not only the most important branch of the economy, but also by far the largest source of foreign currency in the country. However, the agricultural sector is decreasing as a share of the gross domestic product. In 2017 it was 24.5%. The industry (23.2%) and services (52.3%) sectors are gaining in importance. Telecommunications, the financial sector and tourism play a role here. While the Ugandan government is very interested in the growth of the industry, the energy shortage stands in the way of this.

Until a few years ago, Uganda was considered to be poor in natural resources. In the meantime, the hopes for oil discoveries in the region of Lake Albert in western Uganda have not only been confirmed, further oil fields have also been added. In the near future the oil should finally be produced. At the beginning of 2019, a consortium of investors, including the US company General Electric, was awarded the contract to build a refinery. The costs are estimated at around US $ 4 billion. As a location, the West Ugandan community of Kabaale in the Hoima district was selected. Completion should have taken place in 2020, but is now hardly expected before 2025. Uganda’s government would like to see oil revenues as soon as possible, which should be used for education, infrastructure and services. There is a dispute over the taxes that would have to be paid to the Ugandan government for processing, but nobody wants to pay. A 1,445 km pipeline, the longest electrically heated oil pipeline in the world, is being built to the Tanzanian port in Tanga. The deal for this was signed in September 2020. The construction time was set at 2.5 to 3 years, 10,000 jobs should arise from this for both countries. On the other hand, French and Ugandan activists worry about environmental disasters and displacement without adequate compensation.

Uganda’s civil society, supported by parliamentarians and NGOs, is pushing for the oil contracts to be made public. The proceeds of the so-called “black gold” should not primarily benefit foreign companies, but also should not benefit Ugandan corruption.

Environmentalists fear for the preservation of the Murchison National Park, in it lies part of the oil fields.

Furthermore, the conflict with neighboring Congo has not been resolved. Because the oil deposits are in Lake Albert, which separates the two countries; and that exactly in the area of the borderline, which was then interpreted differently by both sides. In 2007, Congolese soldiers attacked and killed several people, including a British employee of the oil company. Subsequently, the two presidents, Museveni and Kabila, agreed on joint production of the oil. But at the moment there is not much to be heard about it.