More than half of the people in Uganda are younger than 15.7 years. Few of them have a chance of getting a good school leaving certificate and vocational training that would guarantee them a good living.

Uganda’s education system consists of seven years of elementary school followed by a four-year middle school and a two-year high school phase. In the following three to five years are estimated for university studies.

According to homosociety, Uganda’s government closed all educational institutions, including nursing and technical training centers, in March. At that time, no case of COVID 19 had been diagnosed in the country. Homeschooling has been offered on radio and television since April. For this purpose, the government ordered ten million radios, which were assembled in Uganda. In addition, worksheets began to be distributed to the families, the newspapers offer teaching material and materials can also be found on the website of the Ministry of Education. However, many families are from home schooling and overwhelmed. Many of them have not received the materials to this day, many parents are illiterate or at least not competent to support the children in learning. The better-off private schools offer online courses. Many teachers try to help the children in the villages to learn in small groups.

In the meantime, the children spend their time at home, helping out with their parents’ farms or in the retail trade. Many children and young people support their parents in their work in quarries. Payment is based on the amount, there is hardly any occupational safety.

On October 15th the schools opened for the exam classes. The other classes should follow gradually. The end of the school year is scheduled for April 30, 2021. The schools must prepare for the opening with hygiene guidelines. Educational institutions in the medical professions have already reopened.

In the meantime the number of family violence, child marriages and pregnancies of very young girls is increasing.

Primary education has been free since 1997. The number of pupils rose by over 2.5 million to around 6.8 million in 2000. Nevertheless, the quality of primary education suffers to this day due to overcrowded classrooms, poorly trained teachers and poor school management. The school dropout rate is immense. In the past 20 years, 4.9 of the 11.5 million students dropped out of school before they could graduate in grade seven. This is a dropout rate of 42.8%. The drop-out rate for girls is slightly higher than for boys. 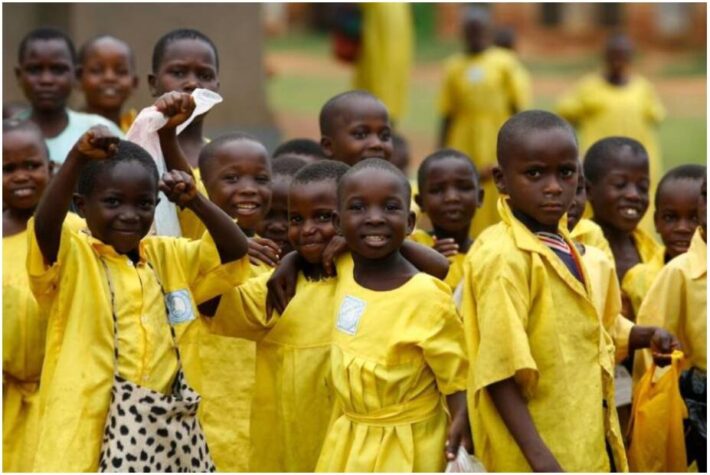 Since then, only a few young people have been able to attend secondary school. Many parents cannot afford the average annual cost of $ 130. In 2007 Uganda became the first country in sub-Saharan Africa to introduce free secondary education. Just one year later, the proportion of students who finished primary school and switched to secondary school grew from 50% to 69%. Over 1000 state and private schools were selected for the program.

For a long time Uganda’s vocational training system was very inadequate. There are still too few state vocational schools. In addition, the equipment of the educational institutions is often inadequate and the management and teaching staff poorly trained. In order to improve the situation, the Federal Republic of Germany had made vocational training a focus of its cooperation with Uganda. Some progress has already been made in recent years. For example, Ugaprivi (Uganda Association of Private Vocational Institutions) looks after and supports private training centers across the country. A new catchphrase is called “Universal Post-Primary Education and Training” (UPPET). In addition to the funding of the secondary school by the state, the placement of young people in an adequate vocational training facility that meets their basic requirements and skills is an important goal in the fight against poverty.

Makerere University was built as early as 1922, during the colonial days, as a technical school. Today over 30,000 students study there. The university is one of the most important universities in all of East and Central Africa. Uganda currently has eleven state, 37 private and four military universities, and the number is rising. Few secondary school graduates can study for free with a scholarship. For everyone else, going to college is very expensive.

Many children and young people in Uganda have little chance of formal education. B. Children in urban slums, school dropouts, children from particularly poor families and orphans or the children of the shepherds in Karamoja. A range of non-formal education and its integration into the education system is particularly important here. In Karamoja, an alternative basic education (ABEK) brings opportunities for children who would otherwise be fully occupied with looking after the animals or coping with everyday life.

Many adults, especially older ones, cannot read or write; for older women the figure is 72.2%. Literacy courses are z. B. offered by the German Adult Education Association.