When Museveni and his National Resistance Army (NRA) came to power in January 1986, a long epoch of violence and terror in Uganda ended. Peace returned to most parts of the country after the Reigns of Terror of Idi Amin and Milton Obote. The political and economic situation in Uganda improved significantly.

Uganda became the model student of the IMF and the World Bank. In the last few years the reputation of Museveni and his country, which was so good at first, has suffered quite a bit. Reasons for this are the ubiquitous corruption, the increasing criticism of the state and governance and not least the civil war (“Lord’s Resistance Army”) in the north, which caused up to 1.5 million internally displaced persons. This has led some donors to cut budget support for Uganda. Yet Uganda is still doing better than most of its neighbors in many ways.

In its history, political parties and organizations were restricted in their right to freedom of expression until a few years ago. A law of June 2nd, 2002 allowed parties to operate on a national level, but they were not allowed to open local offices or hold public events. In November 2004 the Constitutional Court declared these restrictions unconstitutional. Parties can now register.

In addition to the traditional parties such as the Democratic Party (DP), the Uganda Peoples Congress (UPC) and the Conservative Party (CP), the Forum for Democratic Change (FDC), which is derived from the Reform Agenda, the National Democrats Forum (NDF) and a section of the Parliamentary Advocacy Forum (PAFO), a bigger role emerged.

It was not until 2003 that the basic democracy movement NRM (National Resistance Movement) became the NRM-O party.

The Peoples Power movement by Robert Kyaguenyi, who also calls himself Bobi Wine, is very popular, especially among the younger generation. The musician and actor, who was born in 1982, likes to describe himself as the president of the ghetto. He was elected to parliament for the Kyadondo constituency in Wakiso district in July 2017. He is aiming to found a party and to run as a presidential candidate in the next elections.

This is a very topical issue in Uganda, in which even President Museveni is actively involved and on which the press also speaks frankly. Corruption is omnipresent in everyday life; for years it was led by the police, which even in East Africa ranked number 1 as the most corrupt institution. An anti-corruption strategy is now counteracting this. According to the Corruption Perception Index (CPI) developed by Johann Graf Lambsdorff, Uganda ranks 137th out of 180 countries examined and again achieved a small improvement. In addition to the state, more and more donors, such as Denmark, Germany, Norway, Sweden and Great Britain, are now trying to set up the Business Anticorruption Portal Fund and also non-governmental organizations, such as the Anticorruption Coalition Uganda, an association of 70 civil society groups, religious leaders, academics, representatives of the media, institutions and individuals, in order to reduce corruption. For the first time, Uganda’s Inspectorate of Government developed its own corruption report to show facts and tools that fight corruption. A smartphone app should give citizens themselves the opportunity to fight corruption. On the mobile phone you can see which school or hospital received how much money for what purpose from the state. If corruption is suspected, the citizen can send an alarm directly.

As in previous election years, the current elections of all parties involved fought a hot election campaign. During election week, the most promising opposition candidate, Kizza Besigye from the Forum for Democratic Change (FDC), was briefly arrested several times. On election day, the delivery of the election documents to some of the capital’s polling stations was delayed, otherwise the election was mostly peaceful.

According to computergees, Uganda’s cabinet is the third largest in the world with 81 members, only North Korea and Kenya have more ministers.

The next elections will take place in early 2021. The NRM, with incumbent President Museveni, is already preparing for it. The constitution stipulated that candidates for the highest office in the state could not be over 75 years old. In Parliament, the discussion about lifting the age limit led to heated discussions that ended in a fight. In December 2017, 317 parliamentarians voted in favor of lifting the age limit for the president, 97 were against. Museveni signed the law. However, the Supreme Court was then commissioned to examine the situation, and in early 2019 Museveni was given the green light to run for 2021. However, the opposition is not idle either. At the beginning of April 2019, the parliamentarian and musician Bobi Wine announced that he would like to apply for the presidency. He has now united his Peoples Power movement with the old, small National Unity Platform party. In doing so, he avoided the risk that his movement could not be registered as a party.

At the same time as the presidential elections, the members of the 10th parliament were elected. In parliament, the NRM has a clear majority with 293 seats, followed by the FDC with 36, the DP with 15 and the UPC with 6 seats. 10 seats went to independent candidates and 10 to the UPDF. Parliament has increased by 51 seats and now has 426 members.

In 2000, a referendum was held on the question of maintaining the basic democratic system or introducing a multi-party system. With a turnout of 55% (the opposition called for a boycott), 90% were in favor of maintaining the quasi-one-party system. But already in March 2003 the National Executive Committee (NEC, the highest decision-making body of the Movement) and in May 2003 the “National Conference of the Movement” decided to open up the political space and to change the political system (multi-party system). This decision made it necessary to reorganize the elements of the Ugandan constitution on questions of the political system as well as the form of government and the constitutional path. In another referendum on July 28, 2005, the majority of voters (92,Opening of the political space from one-party system to multi-party democracy. In November 2005 Museveni was finally elected party chairman of the NRM. 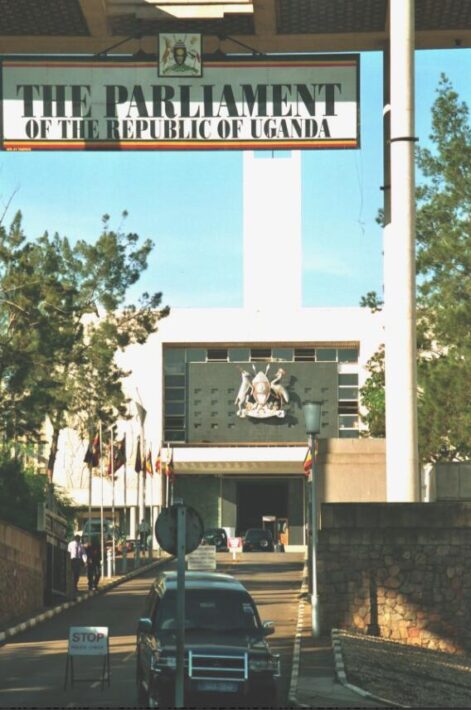