The English explorers JH Speke and JA Grant, while making a journey to discover the sources of the Nile, entered Uganda the first time in 1862. Immediately they were able to detect the good degree of indigenous civilization and the good predisposition towards Europeans by their King M’Tesa, son of Suna, first king of Uganda.

According to Abbreviationfinder, an acronym site which also features history of Uganda, this kingdom was composed after some tribes, inhabitants on the shores of Lake Victoria, rebelled against the king of the Unioro area, who kept them in slavery. These rebels were led by a daring hunter named Ganda, who was proclaimed king by them and then gave the territory its name. From Manda the dynasty of M’Tasa began.

This king, who became famous for his exceptional talents, established a good friendship with the then governor general of eastern Sudan, Carlo Giorgio Gordon, who sent Colonel C. Chaillè Long on a mission to the scene in 1874 and the following year E Linant de Bellefonds. They met with the American explorer Stanley who was crossing the whole black continent. The latter took care of sending some Anglican missionaries through the Church Missionary Society. The following year, the French Catholic missionaries of the Order of the White Fathers also arrived.

King M’Tesa provided all possible assistance to religious and much of its population, especially that of the highest levels, embraced Christianity. However, a rivalry arose between the two churches which concealed the political one, and moreover Islamism began to spread. So when the death of King M’Tesa the attitude towards the Europeans was completely changed by his son Muanga, his successor.

The latter began real anti-Christian persecutions and prohibited all missionaries from leaving the country so as not to escape their sad fate. In fact, over a hundred Catholics were killed and of these 22, having ascertained their martyrdom, were also beatified (in June 1920). A group of pages of the king, very young, were even burned alive. An uprising of people was born; Muanga was forced to flee and went to take refuge with some French missionaries in Ukumbi and there he became a Catholic. Meanwhile Muanga’s brother, Kiueva, had taken office on the throne unleashing fierce struggles against his brother’s followers who, with the help of a former Irish missionary, Stokes, managed to recover the throne in 1889. Struggles and conflicts between the various brotherhoods continued until in February 1890 the German, Dr. Carlo Peters, sent by his government for the colonial settlement of Germany, managed to obtain authorization from Muanga to proclaim Uganda’s German protectorate. And that put an end to all the differences still going on. At that point, England intervened, which for some time had aimed to divide Africa in two in order to be able to govern the part between Cairo and the Cape. This he did, and with a treaty signed with Germany on July 1, 1890, Uganda was included in the territorial sphere under British influence. In fact, in 1894 the protectorate was officially proclaimed.

Muanga, in all this, maintained a hostile attitude towards Great Britain, and for Uganda to finally have a stable structure and peace, Great Britain had to send Sir Harry Johnston, a man of great experience and vast colonial culture.

Uganda however continued to host exploratory expeditions and a great contribution was also made by the Italian expedition of the Duke of Abruzzi to Ruvenzori, in the summer of 1906.

An agricultural and zootechnical economy soon developed while underground resources were important only for the production of the pond.

In 1920 two councils were established in the protectorate: one executive and the other legislative. The first was made up of the governor and 12 members, including 11 ministers; the second of 62 members including 34 Africans. Important for Uganda was the customs union with Kenya and Sudan of 1922.

The first elections took place in March 1961 and in September-October of the same year, a Constitutional Conference held in London established that Uganda would become an independent state in October 1962.

In March 1962 the protectorate obtained self-government in the meantime; in April Uganda People’s Congress, led by Milton Obote, prevailed over the Kabaka Yekk Party, headed by Mutesa II, king of Buganda.

On 9 October 1962 Uganda’s independence was proclaimed and Obote was prime minister. On October 9, 1963 the Republic was proclaimed with President King Mutesa II.

This dualism provoked various oppositions and a precarious political equilibrium, until Obote, strong of the consensus of the army, in February 1966 suspended the Constitution, deposed Mutasa II and in the same April he launched another Constitution that declared Uganda a unitary state with a presidential regime (Obote president).

Mutesa and other constitutional bodies reacted and in 1967 a law restricting individual freedoms was passed. In November 1969 Mutesa II died in London for suspicious causes and this increased the opposition to Obote, which in December escaped a military coup d’état, carried out by Major Idi Amin Dada, who in February was elected president of the republic.

Between 1971 and 1972 several decrees were issued with which political activities were prohibited, constitutional rights and personal freedoms suspended; Unlimited powers were conferred on the army and powers for all crimes were granted to the military court.

In short, a very close dictatorship was implanted by Amin, who in many parts of the world was considered mentally ill, as the author of inconceivable facts. And all the prestige enjoyed by Uganda in the international arena by Obote was completely canceled.

In 1972, to ingratiate himself with the Arabs, he broke his hitherto excellent relations with Israel; he expelled all Asians with a British passport, thus also spoiling relations with Great Britain. In the years 1974/75 he found himself at odds with Kenya, Sudan and Tanzania. With the latter, serious hostilities, worsened in 1979, fell when the Amin regime which, although helped by Libya, fell and he was forced to flee.

An interim president was elected immediately and remained in office for a very short time. The newly elected president Godfrey Binaisa in October 1979 immediately began work on the return to democracy. He appointed as a minister of the interior a man loyal to Obote, P. Muwanga, an exponent of Uganda People’s Congress and the ambitious intellectual Y. Museveni to the defense.

Obote returned triumphantly to his homeland and prevailed with the December 1980 elections. He remained in power for five years amidst many difficulties also created by Museveni, who had founded the National Resistance Army, thus choosing armed struggle.

In July 1985 the army deposed Obote, suspended the Constitution and appointed General T. Okello as president. The dissidents, led by Museveni, conquered the capital Entebbe in January 1986. Museveni, demonstrating a truly great charisma, overcame all tribal struggles and managed to restore stability in the country thus rebuilding Uganda’s credibility in the international arena.

Eggli assumed the position of Head of State, and pending a new Constitution, he ruled with the assistance of a coalition, appointed by the National Resistance Movement. A partial demobilization of the army began, the decentralization of the administration, applied political pluralism to give space to all city levels.

With an economic program financed by the International Monetary Fund, he launched a program of reforms that stabilized the economy and in a short time his administration managed to cancel two thirds of the accumulated foreign debt.

In 1994 the Constituent Assembly was elected and the new Constitution was promulgated. But on the borders with Rwanda a rather critical situation was created and also on the borders with Sudan there were outbreaks of rebellion so that in April 1995 Uganda was forced to break diplomatic relations with the government of Khartoum.

The situation worsened again during 1997 when the LD Kabila government took over in the nearby Democratic Republic of the Congo (ex Zaire). There the civil war had spread and had also involved some countries of central and southern Africa.

Initially, both Uganda and Rwanda supported Kabila, as did Angola, Zimbabwe, Namibia and Kenya. But then they had gone to support the rebels, with the aims, not so hidden, that they could one day control the vast and very rich Congolese mining areas. In addition, many Hutus had withdrawn to Congolese territory, responsible for the Rwandan genocide of 1994. This is also why the two countries intervened in the conflict and of course the most affected was Rwanda.

But Uganda at that time managed another conflict, that with Sudan, due to the Islamic-military regime operating in the south of that country. Diplomatic ties had been severed following mutual accusations of fomenting international Islamic terrorism.

Inside, in October 1995 a new Constitution was promulgated and, as a result of this, the execution of the popular referendum was postponed to 2000 to approve multi-partyism.

In May 1996 the presidential elections were held, won by Museveni, and the following month a new Parliament took office, as required by the Constitution.

In the meantime, however, conflicts continued in the north by the guerrillas of the Lord’s Resistance Army, of a fundamentalist-Christian origin; in 1997 also in the western regions the guerrilla war, awakened by the Islamic Allied Front, of Islamic origin, in which Rwandan Hutu rebels also played. 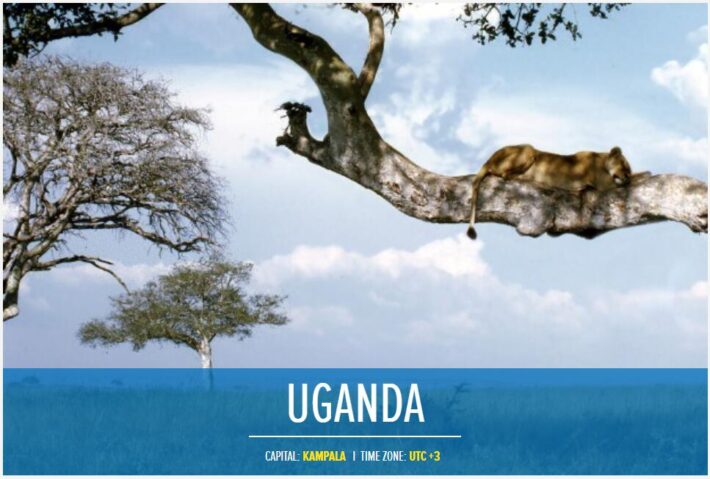 Museveni was forced to apply very harsh repressive methods to eradicate all armed clashes, thus provoking criticism from all over the world. But, at the same time, he paid special attention to the country’s economy and development, gaining the approval of both the World Bank and the International Monetary Fund which, in 1998, cut Uganda’s foreign debt abundantly.

And then between 1998 and 1999 the internal political situation plummeted due to the harshness of the police systems. Even the most basic human rights were constantly trampled; civil liberties were not recognized; the demonstrations were tamed with an iron fist but, in the meantime, numerous government scandals occurred.

Then came a resurgence of terrorism which culminated in March 1999 with the killing of 8 foreign tourists, claimed by Rwandan Hutu rebels.

Internationally, the year 1999 brought two reasons for satisfaction to Uganda. The war in the Congo ceased, all participating countries signed a ceasefire agreement in July. In December Museveni met with Sudanese President Al-Basir, laying the foundations for a future and hopeful lasting pacification.