The name of the village is the same as an ancient kingdom existing in West Africa from 1050 to 1230. That kingdom then became a vast empire under the aegis of a great leader, Sundiata Keita.

The most recent history of Mali tells us that this name was taken up again on January 17, 1959 when a Federation was established between some former French West African territories, such as Senegal and Sudan. Then this dissolved on August 20, 1960 and the name of Mali remained in place only to indicate the Republic of Sudan.

The split of the Federation was officially ratified on September 20, 1960 when the two Republics of Senegal and Sudan, now separate and independent, were admitted to the United Nations.

According to Abbreviationfinder, an acronym site which also features history of Mali, the President of the Republic was M. Keita, leader of the “Sudanese Union” who gave the government a progressive leftist imprint and for this reason already from 1961 he loosened relations with France to which he imposed to remove his military bases and, for plus, it came out of the monetary area of ​​the franc.

Then Keita developed stronger relations with the socialist and revolutionary African countries. Later he ruled increasingly authoritarian and repressive; fought and defeated the oppositions; he arrested the main leaders and in the 1964 elections he admitted the Sudanese Union as a single party.

But this earned him many disputes and the results of the national economy were also disastrous, so in 1966 Keita returned to the franc area, opted for a government of technicians in 1967, ousting the leftist elements; it dissolved the Political Bureau of the Union, fought against the prevailing corruption and applied an austerity regime.

This prompted the discontent of the bureaucrats as the army prepared to depose the president and imprison him, since on November 19, 1968, dissolving the National Assembly, he had founded a popular militia.

The military committee, author of the coup, was headed by M. Traorè who first suspended the Constitution, then dissolved the unions and in 1970 had many members of the National Workers’ Union of Mali arrested.

Captain Y. Daijitè, a member of the military committee, rebelled against all these repressive measures, and so he was arrested in March 1971 and ended his days in prison.

Traore approached France considerably; in April 1972 he visited Paris; in 1973 he signed cooperation agreements with France, without however disavowing those already entered into previously with the Soviet Union and with popular China, and finally he also got closer to the Arab countries.

In June 1974 a popular referendum was held to ratify the new Constitution and then political prisoners were freed between 1975 and 1977; the party “Democratic Union of the People of Mali” was formed and continued with the restoration of constitutional normality.

In 1977 Keita died in prison and this led to unrest and demonstrations against the regime of Traorè which was preparing, in 1978, to insert many civilians in the government and to insert a certain liberalization in all sectors. However, there were also coup attempts that lasted until 1980.

Meanwhile, in March 1979 there was a Congress of the Union, which decreed the formation of a mixed government of military and civilians. In June of the same year there were legislative elections and Traore won them by an overwhelming majority. He had excluded Keita’s followers from the electoral lists and following this there were student demonstrations, also because in the meantime Abdou Camara, leader of the Student Union, had also died in prison. All educational institutions were closed and teachers went on strike.

To restore order, Traore proclaimed official pardon in 1981 and established greater involvement at the top of the government of the groups represented by the most cultured people.

Given the seriousness of the economic situation, Traorè began the privatization of farms. And while all liberalization operations proceeded rather slowly, even if aided by western countries, a terrible drought occurred, lasting from 1983 to 1984, forcing Mali to a complete dependence on foreign aid.

For several years, a question has already arisen between Mali and Burkina Faso for the possession of the Aghacer belt, on the borders between the two countries. The dispute in 1985 intensified and resulted in a war that lasted six days and which was brought back in 1986 by the International Court of Justice in The Hague, with a salomonic conclusion: the streak was divided into two equal parts and each of the two contenders had her.

In 1985 Traorè had been reconfirmed in the position and in the years 1986 to 1988 he entrusted to the other members of the government most of the functions that he had always performed himself. The role of prime minister, vacant since 1971, was entrusted to Mamadou Dembelè; Defense was the preserve of General Sekou Ly and in 1987 the Congress of the Union, in order to restore a facade of cleanliness and honesty to the state, proclaimed a vast campaign of moralization whereby many corrupt officials were sentenced to death.

In March 1988 there were other popular demonstrations, in conjunction with the official visit to the country of the President of Federal Germany, for the restrictive measures imposed on the state by the International Monetary Fund.

In June of the same year there were general elections in which elements of other political sectors also participated and Traorè, to demonstrate all his good will, definitively closed a sadly known penitentiary, freeing all political prisoners.

But the calm didn’t last long; already in 1989 and 1990 other unrest occurred and on March 26, 1991 there was a military coup, led by AT Tourè who immediately founded a National Reconciliation Council, opened dialogue with the oppositions, promised free elections for the end of that same year with the exit of the military from politics from 1992.

In April a government was formed presided over by S. Sacko. On January 12, 1992 the new Constitution was proclaimed. In the following April there were the presidential elections, won by AO Konarè, leader of the Alliance for Democracy in Mali “.
The new government of the Third Republic immediately launched an economy project aimed at drastically cutting public spending to reduce external debt.

The students were the first to rebel; followed all the population who managed in April 1993 to defenestrate the government and replace it with a “cabinet” of representatives, including from the opposition.

But this coalition, led by AS Sow, apolitical but close to the President, proceeded with great difficulty. Above all, an already old, and never resolved, issue concerning the integration of the Tuareg, an ethnic minority present in the north of the country, was settled.

No longer supported by the International Monetary Fund and the World Bank, and moreover affected by the devaluation of the currency by 50%, the government fell in February 1994. Sow was exonerated and replaced by IB Keita, also loyal to the President. 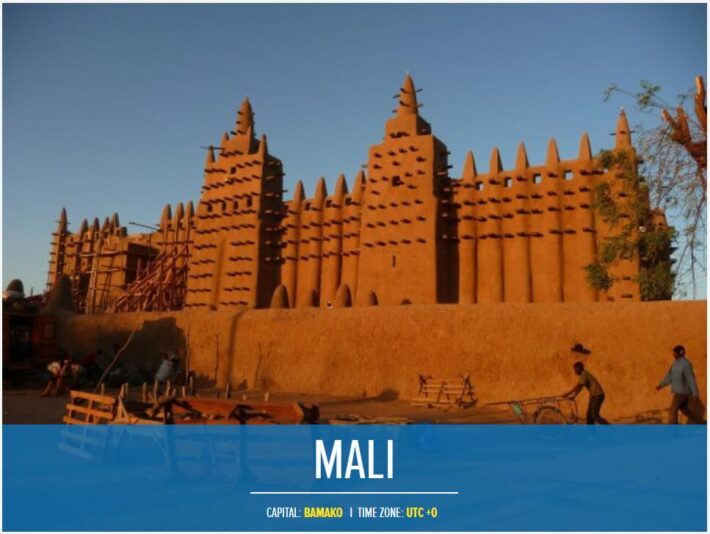 Between 1994 and 1996 the student demonstrations multiplied, weakening more and more the points of agreement between the parties; in addition, the military, who had long been asking for salary adjustments, after the currency devaluation, joined the chorus of protests, thus aggravating an already very critical situation. And despite the fact that in August 1994 an agreement was reached for the protection and integration of the Tuareg in the north, armed clashes between them and the army also took place there.

All this finally ended and in the spring of 1995, after long and difficult negotiations, the problem seemed to be resolved. In March 1996, with the agreement reached for unity and national pacification, thousands of exiles returned from Algeria, Mauritania and Burkina Faso.

And amid a thousand adversities, in January 1997, a fairer electoral law was passed. But precisely for electoral issues, the year 1997 spent almost everything between diatribes and cancellation of elections which were therefore repeated. Until September came and Keita was able to form a new government with her party and with the support of some moderate opposition groups.

In January 1999 the former dictator Traorè, after a long and complex trial, was sentenced to death on charges of abuse of power and embezzlement.