Modern man was developed in Africa, and there are many discoveries after these both east and south on the continent. Also one of the first great civilizations, ancient Egypt, arose here. 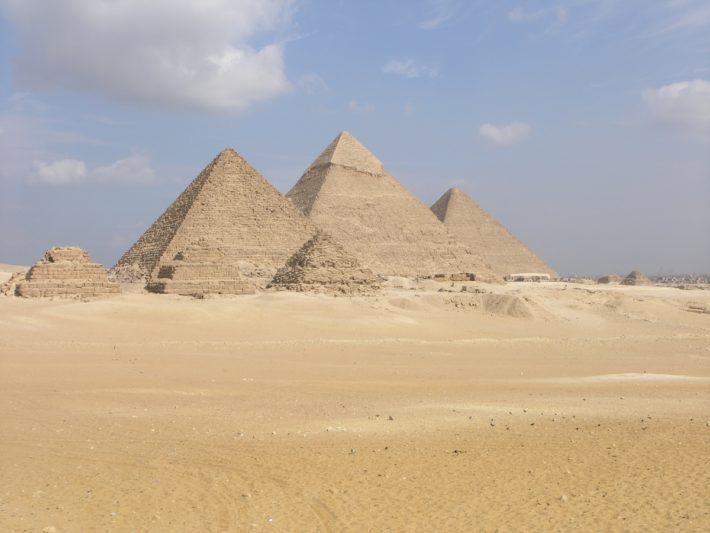 The Great Pyramids at Giza, built approx. 2505-2442 BCE, is perhaps the foremost trademark of Ancient Egypt.

North Africa’s connection to the Mediterranean and the cultures here laid the foundation for a network of commerce and eventually ideas that would last for centuries. Two world religions, first Christianity and then Islam, also spread along these routes.

The oldest known tool finds are from Gona in Ethiopia and are approximately 2.6 million years old. More than a million years later, the more carefully crafted hand ax is the most common tool in African discoveries. It is widely believed that this tool was first developed in Africa and has spread from there to other continents.

About 315,000 years ago, modern man Homo Sapiens originated in Africa. Remnants of the first humans have been found in several parts of the continent, including Morocco and Ethiopia. It is believed that man spread widely throughout the continent before moving on to another continent some 200,000 years ago. 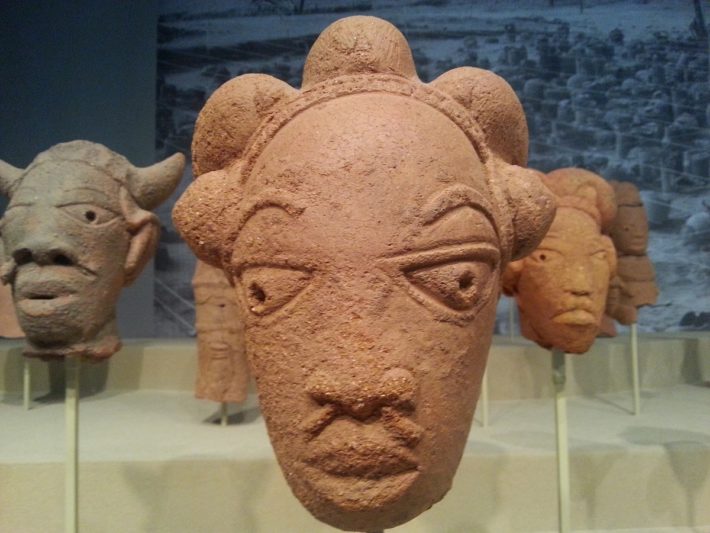 It was probably a people group that lived in today’s Nigeria for the last 500 years before our era. Many terracotta figures have been found after the folk group, here exhibited in an art gallery at Yale University in the United States.

One of the first great civilizations to emerge in the fertile Nile Valley of present-day Egypt about 4,500 years ago. Already 2900 years BCE. parts of the Nile Valley were brought together under one pharaoh , a kind of absolute king of gods. In the early period, called the Old Kingdom, huge tombs were built for these kings. The most famous are the pyramids outside today’s Cairo, built under the Pharaoh Kheops. In the following thousand years, the burial customs changed, and at the same time grew a more comprehensive state administration.

Egypt conducted extensive trade southward in the Nile Valley and along the Red Sea coast, submerging much of Nubia, the northern part of today’s Sudan. In this area it grew around 1000 BCE. emerged an independent kingdom, Kush, also known as Meroë. In the 7th century BCE, the Kush kingdom reigned over much of Egypt, but was crushed by the emerging Aksum empire in Ethiopia. The existence of the Kush kingdom was founded in the control of important trade routes from the interior of Africa to the coast, but Aksum took over the monopoly position Kush had engaged in this trade, and the Kush kingdom fell under about 350 BCE.

In the centuries leading up to our era, the North African coastal region had widespread contact with other cultures around the Mediterranean. The Phoenicians controlled the western Mediterranean from the 8th century. Their most important city was Carthage, founded around 750 BCE. in present-day Tunisia. The Greeks founded colonies along the coast farther east, including the Cyrus of today’s Libya. Egypt was conquered by Alexander the Great in 332 and subsequently ruled by the Ptolemaic royal family.

In the last centuries before our era, the Roman Empire became the dominant power in North Africa. The three Punic wars ended in Carthage’s destruction in 146 before our era. In the western area, Masinissa gathered a large empire and waged a long war with the Romans.

The first Roman province of Africa was founded after the fall of Carthage in 146 BCE, since then more people joined. Roman Africa was fruitful, and there was a denial of wealth there. Numerous cities and large land properties existed throughout the area. The irrigation system was well developed. Primarily grain and olives, but also marble, wood, gold and wild animals were important export goods. The Senate stratum from Africa was at times the dominant one in Rome.

Christianity spread in the cities and among the resident population along the coast. Church fathers like Augustine, Tertullian and Cyprian came from Africa. In Egypt, the Coptic Church was founded on a variation of the Christian doctrine.

North Africa is the part of Africa that lies between the Mediterranean and the Sahara desert.

According to countryaah, Morocco, Western Sahara, Algeria, Tunisia, Libya and Egypt belong to North Africa, while Mauritania and Sudan in some relations are considered to be North Africa, in others to West Africa and East Africa respectively. All of these countries have Arabic as the official language.

Large parts of North Africa are covered by alluvial sediments from the Triassic, Jurassic, Cretaceous and Tertiary times.

South of the Sahara, saw also an agricultural revolution in one thousand years before our era. In many cases, the typical forest or savanna plants used, and something similar to the great centralized civilizations along the Nile, did not occur anywhere else. Instead, several loosely connected cultures emerged, today identified through finds of pottery and metalwork.

In Northern Nigeria, remains have been found for an agricultural community with a highly developed naturalistic ceramic sculpture tradition. The Nok culture was at its most widespread about 2,500 years ago, and, besides the terracotta figures, has also left traces of extensive mining.