Almost the entire population is Muslim and belongs to Islam’s main direction Sunni, but there are smaller groups of Shiites. The new constitution maintains that Islam should be a state religion, as has been the case since 1956, and also prescribes that the president be a Muslim. Religious freedom should prevail and religious gatherings such as mosques may not be used for political purposes.

Groups that demanded a stricter application of Islam suffered severe persecution (see Modern History) during President Zine al-Abidin Ben Ali’s time in power (1987–2011). Following the revolution in January 2011 when Ben Ali was forced to resign, the previously banned Islamist party Ennahda came to power, leading to concerns among secular Tunisians and democracy activists for Tunisia to develop into a strictly Islamic state.

At the same time, extremist Islamists, so-called Salafists, began to carry out attacks on groups or phenomena that they considered to be against Islam. In 2012, over 30 shrines and mausoleos dedicated to Sufic saints were attacked (Sufism, a form of Islam emphasizing spirituality and mysticism, is considered a sham by extremist Islamists). The government then tightened its control over mosques and imams advocating violence and intolerance. The tradition of wearing a face veil, niqab, is also disputed in Tunisia (see Calendar).

Jews have been in the country for hundreds of years. Today there are about 1,500 Jews, most of whom live on the island of Djerba and in Tunis. An older synagogue on Djerba is one of the country’s major sights. 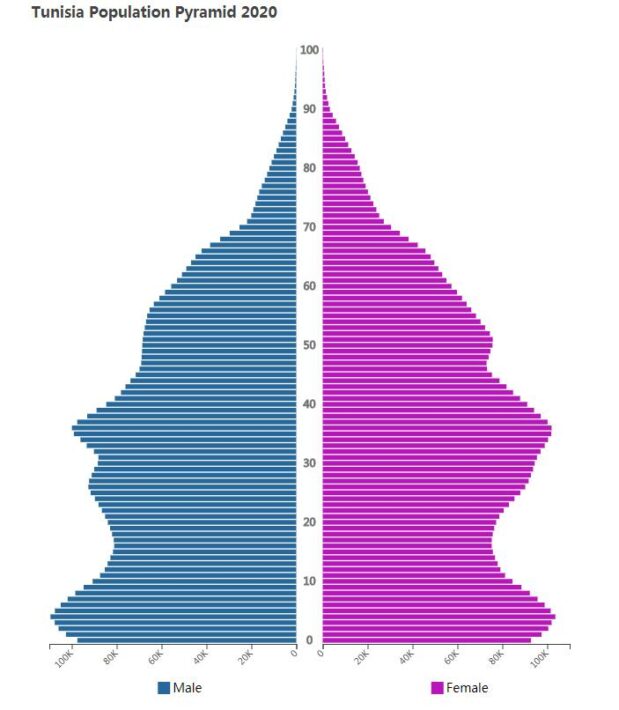 The date for municipal elections is postponed

Following a request from political parties, the electoral authority decides to postpone the date of the municipal elections to be held this spring. The local elections are seen as the last step in Tunisia’s transition to democracy that has been going on since the revolt that began in the Arab Spring of 2011, but they have been postponed several times in the future. In October, the date was set for March 25, now it is moved until May 6.

A policeman is stabbed to death and one is injured in an assault on a roadblock near the parliament building in central Tunis. The perpetrator is arrested and states extremism Islam as motive. The deed is described as the first in Tunis with jihadist signs of two years (see March and November 2015).

Survivors in the Mediterranean are searching for a collision between a boat with migrants and one of the Tunisian fleet vessels. At the crash, in waters patrolled by the Maltese Navy, the migrant ship is believed to have had about 70 people on board. More than half have been saved. During the autumn, traffic with migrants in boats on their way to Italy has increased.

Around a thousand people take part in a manifesto against a law passed by Parliament that gives amnesty to thousands of civil servants accused of corruption during the hard-fought rule of deposed President Ben Ali before 2011. The government defends the law as needed to speed up the limping economy.

Prohibition on the election of a real man is lifted

A spokesman for the president announced that Tunisian women are now allowed to marry men of all religions. Previously, it was forbidden for women to marry men who were not Muslims. A non-Muslim who wanted to marry a Tunisian woman was thus forced to convert to Islam or renounce.

Prime Minister Chahed replaces 13 of his ministers and forms a “war government” to fight “terrorism, corruption, unemployment and regional inequality”. The Finance Minister’s post and the post of Minister of Education go to persons who served under President Ben Ali’s hard-line rule before 2011. According to commentators in Tunisian media, the transformation strengthens President Essebsi’s influence over the government.

Violence against women is prohibited

Parliament adopts a law to put an end to “all violence against women”. The law, which is expected to come into force in 2018, means that “physical, moral and sexual violence” against women will be punishable. An important change is that men should no longer be able to avoid punishment by marrying rape victims. The law means that women who are subjected to domestic violence are entitled to legal and psychological support.

A man is sentenced to one month in prison for smoking a cigarette publicly during the Ramadan, even though there is no law against eating, drinking or smoking during the fasting month. The man is convicted of acting “indecent”. The day before, a demonstration was held in Tunis for the right to eat and drink in public during the Ramadan.

The Chief of Election Commission Chafik Sarsar leaves his post and says he can no longer work “independently and impartially” to enable fair and transparent elections. Sarsar has previously been critical of the Parliament’s failure to adopt new electoral laws needed to organize the first municipal elections after the revolution. He has warned that the transition to democracy was threatened if the elections could not be carried out. However, after the electoral laws came into place, it was decided in April that the municipal elections should be held in December.

German Chancellor Angela Merkel visits Tunisia and the countries conclude an agreement that Tunisians who are denied asylum in Germany should be able to be sent home faster. The agreement also includes that they should receive work training. Merkel has for some time been pushing Tunisia to facilitate the reception of citizens who are not granted asylum in Europe. The issue got extra sharp when it emerged that a Tunisian was behind the terrorist act in Berlin in December 2016, which claimed the lives of twelve people. The assailant, who was denied his asylum application in Germany, was later shot dead by police in Italy.

The violence of the security forces threatens progress

Increasingly brutal methods used by security forces in the fight against terrorism pose a threat to the fragile democracy in Tunisia, Amnesty International states in a report. The state of emergency that has existed since November 2015 has created a situation where security forces without risk of sanction use the torture of suspects and harassment of their relatives, writes the human rights organization. The authorities have introduced travel bans for at least 5,000 people suspected of joining jihadist groups abroad.