Religious freedom prevails. The census of 2014 showed that the Muslims (mainly Sunni) were slightly more than the Christians (mainly Catholics), who have traditionally had the greatest influence in society. The census also showed that the proportion of Muslims is significantly higher among the country’s non-Ivorian residents. Among them, the proportion of Muslims was 72 percent. Among Ivorian citizens, Christians are more than Muslims: 39 percent and 30 percent, respectively.

The Christians live mainly in the southern and middle Ivory Coast and dominate within the middle class in the cities. The largest Protestant communities are the Methodists. But there are also several evangelical movements that grow in strength. Among the most prominent syncretistic societies, which blend Christianity with traditional beliefs, include the Harrist Church and God’s soldiers (founded by an Ivorian woman).

Former President Felix Houphouèt-Boigny (1960–1993) was a Catholic, and at enormous cost, erected the world’s largest church outside his hometown of Yamoussoukro (which also became the country’s capital in 1983). The huge basilica is twice as tall as Notre Dame Church in Paris.

Former President Laurent Gbagbo (2000–2011) and his wife, Simone, belonged to an evangelical church and encouraged ministers who sought after American TV evangelists. In the dispute over who won the presidential election, state TV reported on prophecies that predicted Gbagbo’s victory, something that went on until the couple was arrested in 2011 (see Current Policy).

Islam has the greatest spread among Malinké and Senufo in the north, but immigration has created large groups of Muslims in the cities in the south. Muslims also often mix Islam with traditional indigenous religions.

Nearly a fifth of the population said they lacked religious beliefs. There are also small groups of Buddhists, followers of Hare Krishna and other religions. 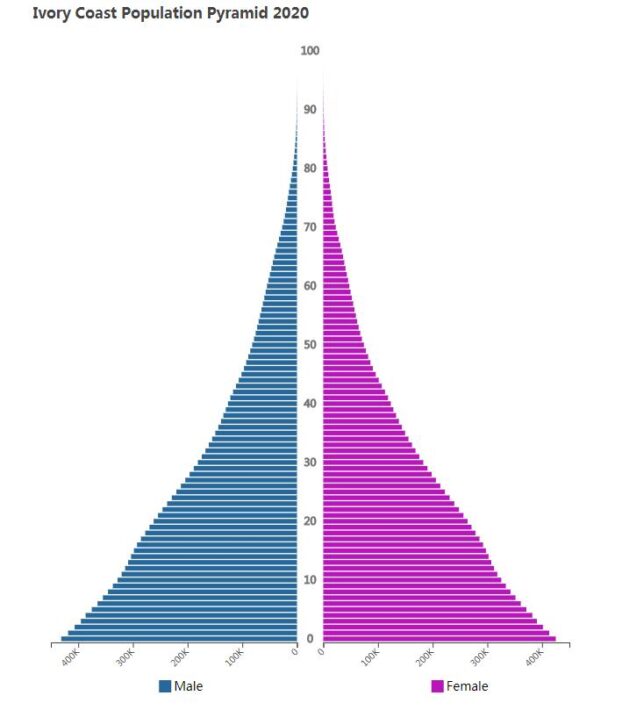 Arrest warrants are issued for Soro

Ivorian authorities issue an arrest warrant for Guillaume Soro, the former rebel leader and president of the National Assembly and one of the candidates in next year’s presidential election. According to the State Prosecutor, Soro poses a threat to the state authority and he is also accused of money laundering and of having shot himself in public resources. The arrest warrant comes at the same time as Soro is on his way home after being in France since May. He now chooses not to travel to the Ivory Coast but to stay in neighboring Ghana. A spokesman for Soro’s party GPS and 15 other Soro supporters are arrested. The authorities are also conducting a raid on GPS party premises in Abidjan, triggering street protests in the area.

Eight West African countries using the CFA franc regional currency agree in Abidjan, Ivory Coast, to change its name to eco. The intention is that it will continue to be linked to the euro, but the eight countries, Benin, Burkina Faso, Guinea-Bissau, Ivory Coast, Mali, Niger, Senegal and Togo will no longer have to store 50 percent of their foreign exchange reserves in France and France should no longer have any representative on the board of the currency union. The intention is for the change to take effect in 2020. French President Emmanuel Macron, who is in place in Abidjan, says in connection with the fact that colonialism in Africa was “a serious mistake”. Critics of the CFA franc see it as a remnant from the colonial era, others as a guarantor of financial stability.

Alassane Ouattara announces that he plans to win a third term as president of his old political rivals, former Presidents Laurent Gbagbo and Henri Konan Bédié, will take part in the October 2020 elections. Ouattara says at a meeting in Katiola in the Northern Ivory Coast that he wants to be able to hand over power to a new generation of politicians, and not to those who “once destroyed our country”. A constitutional change made in 2016 allows today’s 77-year-old Ouattara to stand for re-election, although the opposition questions it when voter turnout was low, at only 42 percent. Bédié, who is 85, has not yet announced whether he intends to stand or not, the 77-year-old Gbagbo lives in Belgium since he was conditionally released by the ICC .

EX rebel Soro is running for the 2020 presidential election

Guillaume Soro, the former rebel leader and former president of the National Assembly, announces that he intends to run for president in 2020. He will propose a new group called Generations and People in Solidarity (Generations et peuples solidaires, GPS) and tell the news agency AFP says he may surprise political experts in the same way Emmanuel Macron did in France 2017. Soro now emphasizes that he does not believe he will be approved as presidential candidate, despite accusations that he was behind an army revolt in 2017 (see May 2017).

The convict against Gbagbo is appealed

ICC chief prosecutor Fatou Bensouda appeals against the acquittal against former president Laurent Gbagbo and former youth minister and leader of the FPI militia Young Patriots. Both were released at the beginning of the year from all charges of being an “indirect accomplice” in murders, rapes, persecution and other inhumane acts, and have since been released (see January 2019). However, Gbagbo has had to live in Belgium, while Charles Blé Goudé is still in the Netherlands awaiting a possible appeal. The appeal will be dealt with by five judges belonging to the ICC Appellate Unit. Pascal Affi N’Guessan, leader of Gbagbo’s Ivorian People’s Party (FPI), criticizes Bensouda’s decision to appeal, especially as it comes so close to the upcoming presidential election (to be held in October 2020).

Concerned about politics ahead of next year’s presidential election

The National Assembly holds its first session after Guillaume Soro left the Presidential post. He has now been replaced by Amadou Soumahoro from the ruling party RHDP. Soro is now in the Ivory Coast Collection (Raci), which is being registered as a new party. Raci already has 16 members in the National Assembly. Soro had political windfall this fall, not least because he was prepared to publicly apologize for his role in the recent outbreak of violence, but the fact that former President Laurent Gbagbo was acquitted by the ICCat the beginning of the year may have remodeled on the political scene for next year’s presidential election. Gbagbo is still in Brussels awaiting the ICC’s prosecutor to appeal the acquittal, but has begun to take command of his old party FPI, and has made clear markings against FPI’s current leader Pascal Affi N’Guessan, about whom that is what decides.

Ex-President Gbagbo, and former Youth Minister Charles Blé Goudé, remain in custody at the ICC for the time being at the request of prosecutors who intend to appeal the decision to acquit them. However, they cannot appeal the verdict until the judges have clearly stated their reasons for the acquittal. The men can only be released on February 1 when the court reappears.

Former President Laurent Gbagbo is cleared by the ICC of allegations of being an “indirect accomplice” in murders, rapes, persecution and other inhumane acts, and will be released. Charles Blé Goudé, who was Gbagbo’s youth minister, who was also prosecuted in the same case is also acquitted. Judge Cuno Tarfusser believes that the prosecutor’s side could not prove that the two men committed the crimes for which they were charged. Outside the court, Gbagbo supporters gather to celebrate. But the acquittal verdicts mean a severe blow to all those who fell victim to the violence after the 2010 election, when about 3,000 people were killed and about half a million forced to flee. Gbagbo was the first former head of state prosecuted by the ICC. He has always maintained that the charge against him was politically motivated.